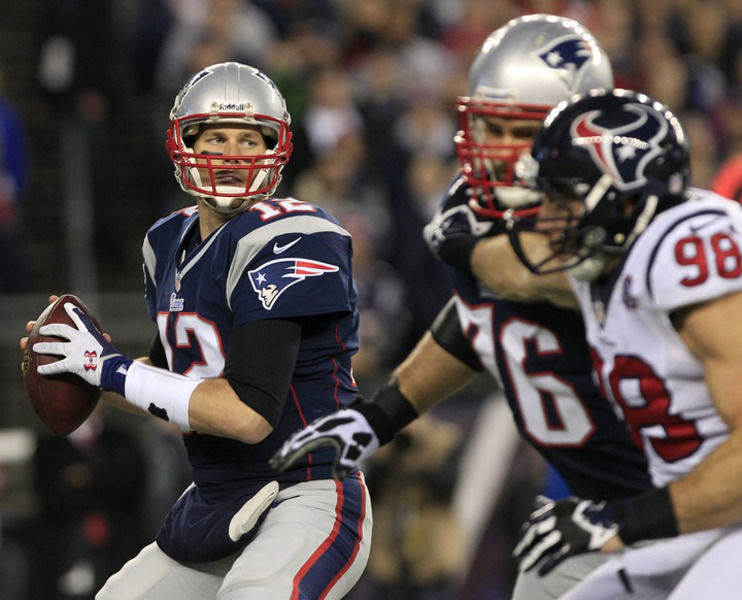 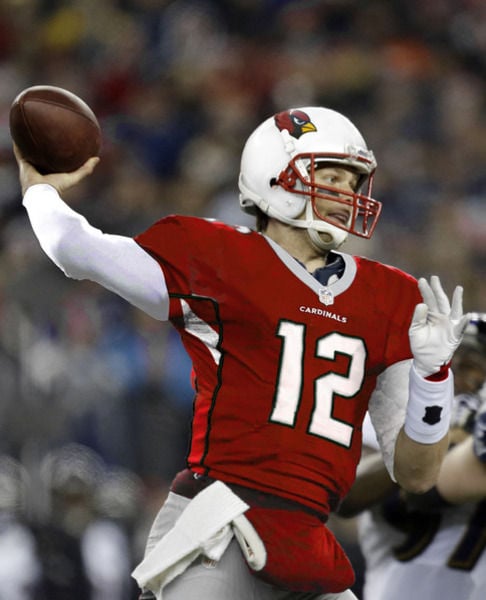 Tom Brady playing for the Arizona Cardinals? Maybe. If Hector Longo's logic makes sense to anyone in charge over in Foxboro. (Staff photo illustration/AP photo)

Tom Brady playing for the Arizona Cardinals? Maybe. If Hector Longo's logic makes sense to anyone in charge over in Foxboro. (Staff photo illustration/AP photo)

FOXBORO — Back in 2009, New England Patriots coach Bill Belichick flirted with the adage that “nobody is untradeable,” when he dealt an in-his-prime, potential Hall-of-Famer Richard Seymour to Oakland for a first-round pick.

It’s now time for the coach to skip the small talk and get right to the real proposal.

Championship-starved — trust me, Belichick needs another Lombardi Trophy like I need air to breathe — since 2004, despite four trips to the conference title game and a pair of Super Bowl appearances, the Patriots have to contemplate this conundrum.

Are Tom Brady’s best days behind him?

My opinion? Yes. He’s still elite, top three or four. But he’s not the best of the best any more. We’ve seen too much in big games the last handful of years.

Can Belichick make enough moves to supply Brady with enough quality parts around him to capture the ultimate prize?

My opinion? No. While I believe they can compete at the highest level, particularly in the weak AFC, there are too many key holes to fill (more on that later).

So, without any further beating around the bush, it’s time for Patriots football CEO and head coach to consider what several million people probable deem unthinkable: Should the Patriots trade Brady?

Do you think Belichick is happy with his quarterback play the last five playoff defeats? Isn’t that why he pays Brady three times as much as the other “stars,” so he can make up for their mistakes?

In this instance, after another January disappointment against a driven, rugged, physical but soon-to-be dismantled Ravens team, sending Brady away this off-season would be the best for all parties.

Deal him. Deal him now, while you can have access to some really high bidders.

I’m not talking for a bag of footballs and some ex-CFL scrubbinis either.

Brady, even at age 35, should command a deal of at the least Ricky Williams proportions (somebody’s entire draft) or maybe even to the extremes that the Vikings paid Dallas for Herschel Walker (two 1sts, two 2nds, two 3rds).

To that end, I have targeted five potential suitors for the big fella, none better than the Arizona Cardinals.

First and foremost, the Cardinals can’t hurt you. In the NFC West, Brady is as far away as possible. Unless he plays another five years — highly unlikely — the only place you’ll encounter Brady again on the field of battle is at a Super Bowl.

The Cardinals have the ammunition to attract the Patriots to the negotiating table. Remember, they pick at No. 7, an attractive spot for this draft, which has already been fortified by over 70 underclassmen.

Arizona also has incredible need. Most draftniks currently have the Cards dabbling with the likes of USC QB Matt Barkley or West Virginia’s Geno Smith in the first round.

Why take a shot and fail again, a la Matt Leinart? This franchise can have its own new face in a matter days, one that is proven and currently stands at the forefront of the game.

Arizona needs to sell tickets and develop interest that they haven’t had since Kurt Warner left town.

If you’re new coach Bruce Arians and you’ve got a choice, do you open your first real NFL head coaching job with Hall of Famer Tom Brady or the three-headed menace known as Hoyer/Skelton/Kolb?

This would not be one-sided. The Cardinals would get one of the game’s best quarterbacks to go with one of the best wide receivers in the game (Larry Fitzgerald) and become an immediate contender.

Enough about the Cardinals, though. The Patriots should really be our focus right now.

The Patriots are 7-7 over their last 14 playoff games with a defense that has “improved” from 32nd to 31st to 27th overall in the last three seasons.

Brady has not dazzled by any means come playoff time, i.e. when it really counts. Make it back-to-back years of Joe Flacco outplaying the legend when it matters. In my humble opinion, that is unacceptable.

I’m not saying Brady has tumbled back to the pack of decent to good quarterbacks. But he hasn’t won a playoff game on his own for this franchise since the Super Bowl championship years.

The move fits, if not for the entire franchise, but for Belichick, who at times appears uneasy with this pass-happy product we have come to know, adore and be summarily disappointed by in the playoffs.

For the legendary coach, it’s an opportunity to win a title without Brady. We know how driven the coach is to cement his spot in history. Winning a title with a quarterback not named Brady unites him with his ex-boss Bill Parcells, who won championships with Phil Simms and then Jeff Hostetler running the show. It ends the “Brady vs. Belichick” discussion.

Say, for a second, that Arizona was asked for and gave the Pats its entire draft.

Think of the options and the rebuilding Belichick could do in a short time. Remember, this franchise has no picks in the fourth, fifth and sixth rounds either, this April.

Imagine a defensive stopper like LSU’s Barkevious Mingo available up at the No. 7. Think what he could do for this defense.

Belichick would have the chance and the arsenal to re-stock this team for another eight-year run.

Replacing Brady would be a chore. But it can happen. Better yet, you don’t have to replace him, just find a quarterback 75 percent as good as Brady, who can run an offense.

Look at the Colts with Andrew Luck, the Niners with Colin Kaepernick, Seattle with Russell Wilson and Washington with RGIII.

Find your guy in the draft. Give Ryan Mallett the reins if he is ready. Or seek a replacement elsewhere.

Remember that guy Matt Cassell? He led you to an 11-5 mark in 2008 when Brady was on the shelf. Chances are he could be had for a song in Kansas City, where he probably doesn’t fit into new coach Andy Reid’s system.

Shortly after the Super Bowl, Alex Smith will be seeking a new home. He was a couple botched punt returns away from leading the Niners to Super Bowl XLVI.

New faces are out there, and the Patriots would at that point be in superior bargaining shape.

Belichick’s toughest sell on the Brady deal would no doubt be the Kraft family. Ownership is married to the franchise QB financially.

No Brady means no assuredness of 10-to-13-win seasons. That means the fan base could falter.

But isn’t Belichick supposed to be bigger than a franchise QB? Isn’t he the real brains behind this operation?

In an era where NFL franchises are fumbling to fill seats weekly, the Pats’ season-ticket wait list was last tallied at about 55,000 and rising.

Of course, the Celtics had a similar list during the Larry Bird Era. A couple years after his retirement you could have lobbed hand grenades from the bleachers and not hurt anyone during some Celts games.

It’s time to think outside the box and think the unthinkable. It’s time to consider trading away Brady.