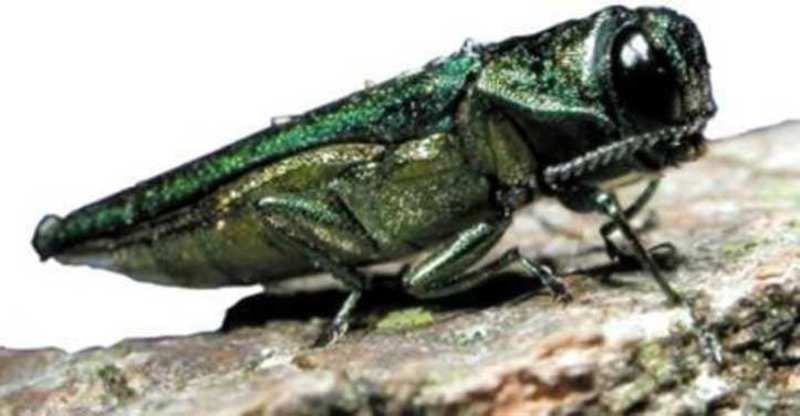 Forestry experts are concerned about the emerald ash borer, which devastates ash trees. 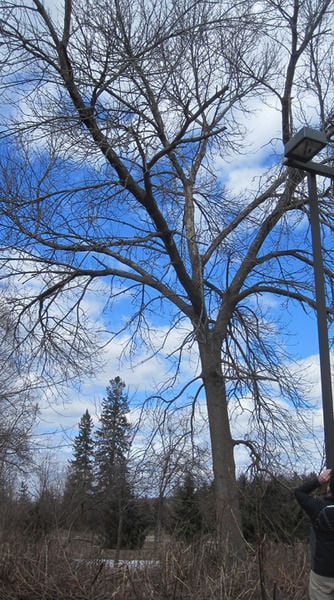 Courtesy photo This ash tree in Concord, N.H., has been infected by the emerald ash borer, prompting an emergency quarantine on the movement of ash wood in that county. New Hampshire officials are concerned the insect could destroy the state's ash tree population.

Forestry experts are concerned about the emerald ash borer, which devastates ash trees.

Courtesy photo This ash tree in Concord, N.H., has been infected by the emerald ash borer, prompting an emergency quarantine on the movement of ash wood in that county. New Hampshire officials are concerned the insect could destroy the state's ash tree population.

It’s small, green and not particularly attractive — and those are its good qualities.

The emerald ash borer has been receiving a lot of attention lately and all of it’s bad.

The little insect with the beady eyes is worrying New Hampshire and Massachusetts forestry experts and making some in the wood-harvesting industry nervous.

That’s because the emerald ash borer has the potential to devastate ash tree populations, causing millions of dollars in damage to the trees and the two states’ economies. Ash is commonly used for firewood, furniture, wood products, even baseball bats.

“It’s poses a very great problem,” said Fred Borman, a forestry educator with the University of New Hampshire Cooperative Extension. “It has killed millions of ash trees wherever it’s been found.”

New Hampshire officials are particularly concerned, imposing a quarantine last week in Merrimack County that prevented ash from being transported in or out of the county.

The quarantine was announced after the pest was found on a tree in Concord. Ash trees die only three to five years after infestation.

While ash trees are a valuable source of wood, they are commonly used to beautify communities such as Derry, where they line town streets, Borman said.

She also said the loss of the ash tree population would mean the loss of an estimated $1 million a year to those New Hampshire industries that rely on wood to produce furniture and lumber. Ash is commonly used in the manufacture of cabinets and flooring.

An additional loss of about $500,000 a year would be felt by those who sell ash as firewood, Bennett said.

Ash is a popular firewood because it’s dry and easy to burn.

Ash makes up about 6 percent of New Hampshire’s hardwood forests.

“We don’t have a huge amount of ash in New Hampshire, but it’s still significant,” Bennett said.

Ash plays a big role in Massachusetts’ economy as well, according to Peter Church, director of forest stewardship for the Massachusetts Department of Conservation and Recreation.

“We are very concerned,” Church said. “It could eventually kill off the ash tree species.”

Since the insect was first spotted in Michigan in 2002, it’s made its way across the country and wreaked havoc in 19 states, Church said.

Ash only makes up about 4 percent of Massachusetts’ hardwood forests, with most of the trees in the Berkshires, he said.

But if the emerald ash borer destroys the state’s ash tree population, it’s expected to have an overall economic impact of $500 million, Church said.

Some local furniture-making companies and lumber yards said they don’t use ash because they prefer other less expensive, easier-to-obtain woods, including pine.

Local firewood dealers said they cut and sell ash, but not much compared to other prevalent species such as oak, maple and pine.

For that reason, they are not as worried as environmentalists, but still concerned.

Some hadn’t heard much about the emerald ash borer until last week, including Bob Rotondo of Rotondo Firewood in Methuen.

Rotondo said he hasn’t had any problems with the insect, but is eager to learn more about it to protect his business.

Anyone who sells firewood has to make sure they comply with transportation regulations aimed at preventing the spread of invasive inspects, including the Asian longhorned beetle, he said.

Rotondo said he’s seen a lot of dead ash trees in recent years and wondered why it has died.

So has Mac Livingston of Livingston Family Tree Service in Methuen. He said he cuts some ash, but not a lot.

“There have always been issues with ash trees dying,” he said. “I’m not sure why.”

“So far, we haven’t been affected at all,” he said.