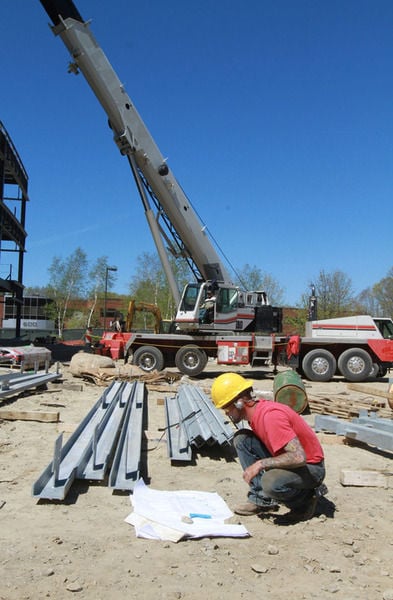 Chris Derosier looks at a diagram as he gets ready to rig the steel at the new building under construction in Andover where Schneider Electric will be moving hundreds of employees from their North Andover and Billerica offices. 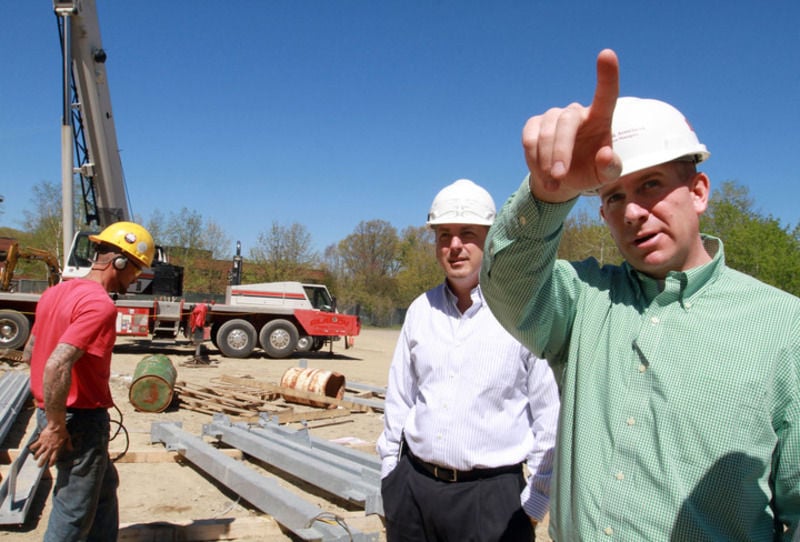 AMY SWEENEY/Staff photoChad Reynolds, right, from Legat McCall and Stephen Robak, from J. Calnan & Associates, stand outside the new construction at 800 Federal St. where Schneider Electric will be moving hundreds of employees from their North Andover and Billerica offces. 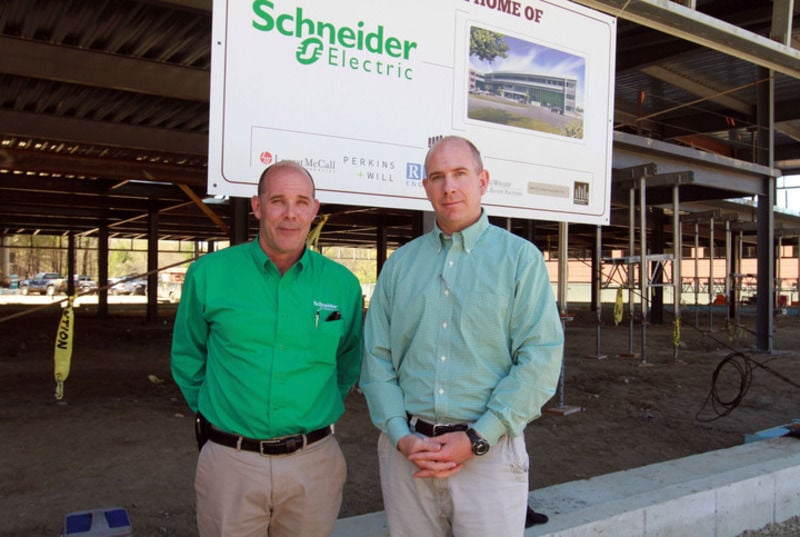 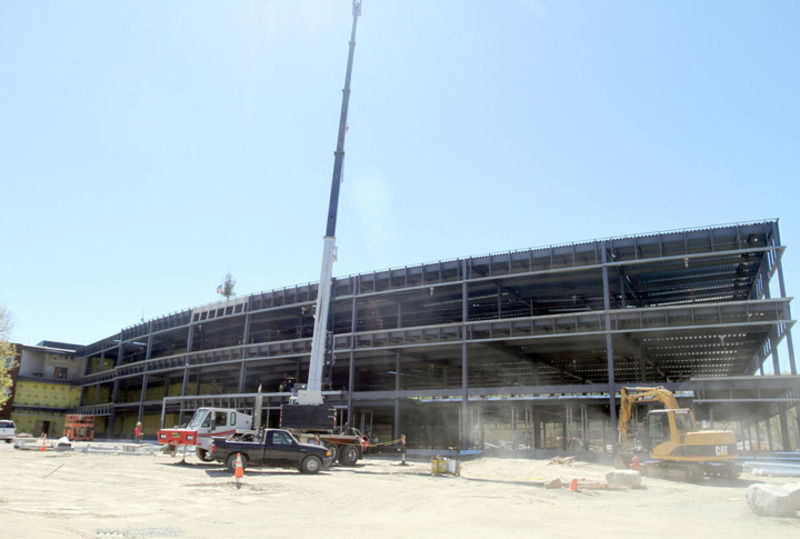 Chris Derosier looks at a diagram as he gets ready to rig the steel at the new building under construction in Andover where Schneider Electric will be moving hundreds of employees from their North Andover and Billerica offices.

AMY SWEENEY/Staff photoChad Reynolds, right, from Legat McCall and Stephen Robak, from J. Calnan & Associates, stand outside the new construction at 800 Federal St. where Schneider Electric will be moving hundreds of employees from their North Andover and Billerica offces.

ANDOVER — As construction crews crawl over the newly risen steel skeleton of a curving, 77,000-square-foot building on Federal Street, business and community leaders in a neighboring town are scrambling to find tenants for a soon-to-be-empty, 19th-Century brick mill building.

By the end of this year, some 400 employees of Schneider Electric will be moving out of the 1860s-era structure they occupy at 1 High St. in North Andover into a gleaming, mostly new, state-of-the-art facility at 800 Federal St., located off River Road near the intersection of interstates 93 and 495.

The move is heralded by Schneider Electric and Andover officials as a big win for the company and the town, which offered property tax reductions as an incentive to lure them to the site.

But for North Andover, the loss of Schneider Electric is just more bad news.

“We are disappointed,” said North Andover Selectman Rosemary Smedile, noting that Schneider’s departure comes on top of an announcement made earlier this year that Converse and its 400 employees are leaving the same facility by 2015 and moving to Boston. “Both are excellent corporate citizens.”

Smedile said the move by Schneider rankles town officials not only because it leaves a hole in an important piece of real estate, but also because North Andover couldn’t offer the same kind of property tax break offered by Andover.

“You are only allowed to offer tax incentives on new construction and more job creation,” she said. “It makes it very difficult when you have to compete with the neighbor next door that can then offer an entirely new building. But is taking jobs from one community and putting them in another considered job creation? It is troubling that we were put at such a disadvantage.”

Barry Coflan, a senior vice president at Schneider, said the tax reduction known as a TIF, or tax-increment-financing plan, offered by Andover and approved by the state was a big part of the reason the company made the move.

“The TIF was extremely important,” he said. “If we hadn’t had these incentives, I don’t think it (the new facility) would have been approved by the company.”

Last December, the state’s Economic Assistance Coordinating Council approved a TIF plan that allows the company to increase the value of the property it is moving into but not pay the full taxes the property could bring in for the first five years.

For three years, the company will pay only the tax owed for the present value of the property, which up until recently was occupied by a vacant office building. For the fourth and fifth years of the TIF, the company will pay 65 percent of the increase in value. The full tax value will be paid in subsequent years.

Meanwhile, the company is expected to retain 65 existing jobs and relocate 525 more to Andover in the company’s first year, according to Planning Director Paul Materazzo. For each of the five years after that, 15 more jobs must be added.

Coflan said the number of jobs will actually exceed that estimate, as the $30 billion company is growing by about 15 percent a year. The company employs 30,000 people in North America and 140,000 worldwide. It will have 730 employees when the 235,000-square-foot facility opens in December of this year. The employees are being transfered from North Andover, Billerica and Rhode Island.

An existing office building on the site is being renovated, while workers are attaching a 70,000-square-foot, curving addition. The project is estimated to cost about $20 million.

When it’s done, it will be a showcase for the company’s energy-efficiency products, such as advanced heating and air-conditioning systems, lighting and other power-saving technology. Clients and employees from all over the world will come to the site to see how the company’s award-winning thermostats, for example, operate.

In North Andover, meanwhile, town officials are mulling the future of 1 High St.

The departure of Schneider and Converse will leave almost 400,000 square feet of vacant space, including an 80,000-square-foot warehouse customized for Schneider Electric.

The owners, an investment fund, have hired a new management company, C.B. Richard Ellis, to market and manage the facility. Smedile said she thought the property was for sale.

The owners of 1 High St. may want to convert the building to a mixed-use of housing, retail and office space, a prospect not viewed keenly by some.

“We still believe it’s a great location for similar type uses that are there now,” Smedile said. “We are hopeful it remains the same.”

Across the street from Scheider and Converse, however, an older mill building has been converted to housing, retail and commercial space and has done very well, according to North Andover Town Planner Curt Bellevance.

“Across the street, the East Mill was empty five years ago, now it’s full,” he said. “It’s just a matter of finding the right fit. We still feel North Andover is an attractive community to live and work in.”

“People who work there love it,” she said. “They enjoyed the location, it was no hassle parking or traffic. It has a lot to offer.”