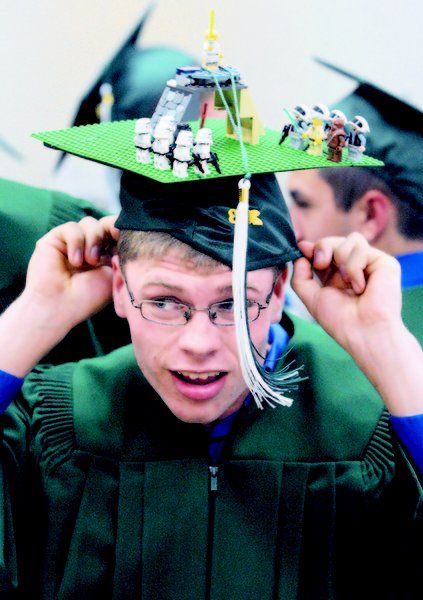 Graduate Robert Daigle of Peabody places his mortarboard, which he embellished with "Star Wars" Legos, on his head. 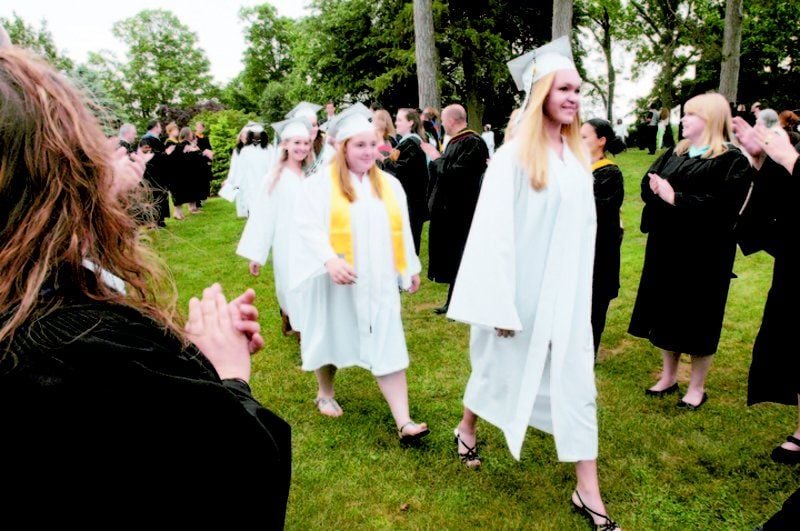 Secretary Kellie Fone of Methuen, right; treasurer Brianna Mann of Stoneham; and their fellow class officers and graduates march past the applauding faculty into the tent during the processional for Essex Agricultural and Technical High School's graduation.

Graduate Robert Daigle of Peabody places his mortarboard, which he embellished with "Star Wars" Legos, on his head.

Secretary Kellie Fone of Methuen, right; treasurer Brianna Mann of Stoneham; and their fellow class officers and graduates march past the applauding faculty into the tent during the processional for Essex Agricultural and Technical High School's graduation.

DANVERS — With their voices, Lara Carney of Gloucester and Abigail Seabrook of Newburyport provided an emotional musical capstone to last evening’s graduation exercises under a jammed tent on the front lawn of Essex Agricultural and Technical High School.

They did so during the next to the last such ceremony for Essex Aggie before the school merges into a new $133 million technical high school being built across the street from where the graduation took place.

After performing a duet of the song “For Good” from the musical “Wicked,” Carney and Seabrook, who are best friends, hugged, and the graduates, friends and family screamed and applauded the moment.

“It’s a really inspirational song and it really affects everyone,” Seabrook said of the song “For Good.”

“Because, I don’t know if you could tell,” she added, “but a lot of people were crying in the audience.” For Seabrook, who studied animal science, the moment caused memories from her four years to flood in.

Carney and Seabrook also performed a duet of the national anthem last night.

Before receiving their sheepskins, however, student speakers struggled to sum up what this moment meant.

Valedictorian Brittaney Leeper of Haverhill said she was at a loss, given her speech was meant to “validate” the class.

“How was I supposed to make over 100 people feel like the time spent here was worth the time and effort that we put in?” Her solution — Look up previous valedictorian speeches on the Internet. “I probably shouldn’t admit that,” she said.

Those other speeches talked about how high school represented the best four years of their lives and how they would be leaders of the future. Leeper said she could not guarantee that, because everyone had different experiences, both good and bad.

“It’s not my job to choose how you feel and act about your time at Essex Aggie or tell you how you will spend the rest of your lives. But it is within my limits to ask you something. Was there something, whether it be a class, friend or teacher, a club ... anything at all, anything that you felt was worth your time, anything that made you feel happy or made you feel that you belong, something that you would never have experienced coming to Essex Aggie? ... It is your choice to choose to make these years into something worth remembering and to make your life better based on these years.”

Class orator Cherish Wanter of Salem, who ranked third in her class, took a look back at how everyone bonded, including on a river trip for environmental students.

“Spending two weeks with a group of teenagers was not easy,” Wanter said, “because no one could hide their flaws.” Students faced many obstacles in and out of school, she added. “I urge us not to forget the challenges we faced in this school, but to reflect on it during times of difficulty to remember the incredible strength we each possess.”

Salutatorian Samantha Hardy also took a look back to her freshman year: “Just think back to the first day of school when we all got to take those awful ID pictures and had to play those icebreaker games in the soccer field.” She, too, said graduates have a lot of choices to make, and her advice was to stand out.

“The world is full of new high school graduates, so it’s your job to make everyone see you. Make them see why you’re not just another teenager looking for things to be handed to her. Prove that you’re unique and hardworking and special.”

Staff writer Ethan Forman can be reached at 978-338-2673, by email at eforman@salemnews.com or on Twitter at @DanverSalemNews.

Class of 2013 President Meaghan Summerlin of Methuen played a prominent role in last night’s graduation by acting as the master of ceremonies.

Senior class advisers Adam Stackhouse and Monica Roy spoke about unique experiences students have had at Essex Aggie: “You will carry the experiences you have had here forward to college, to career, to military service, and these experiences will affect how you view the world. You will be able to think outside the box, to try something new, to go out on a limb, literally and figuratively,” Roy said in giving the joint address.

The perfect attendance award went to Logan Gilliland of Marblehead, Samantha Grungo of Malden, Trevor Lamb of Lowell and Kylie McGovern of Saugus. They attended 720 consecutive school days over the course of four years.

Most creative mortarboard: Amid the many well-done airbrushed designs, Robert Daigle III of Peabody stood out as he had actual Lego “Star Wars” figures on his cap, including Luke Skywalker and Darth Vader. None of them fell off during graduation.

Catchiest mortarboard phrase that may propel graduate to great things: “Chongris for Congress,” written on the mortarboard of Aleksandr Chongris of Andover