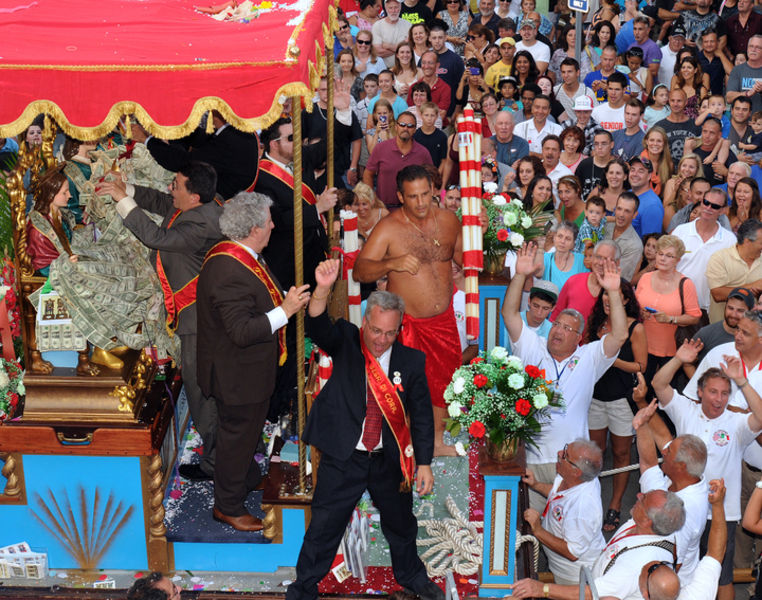 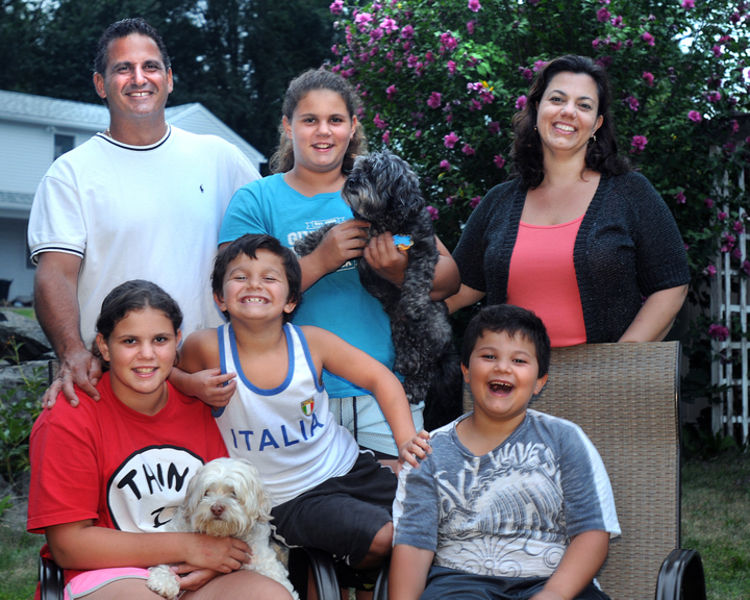 METHUEN — Late on an ordinary Friday afternoon, the four miracles sit at their dining room table with their parents, Carmen and Sherry Giuffrida.

Twin sisters Gia and Olivia, 12, poke a cell phone, snap Lego pieces and play with their dogs Pepper and Murray.

Twin brothers Gianni and Luke, 7, riffle a picture album. They land on a page, and, pointing, debate who is who in photos of them side by side as swaddled newborns.

Small pins of the three saints — Alfio, Filadelfo and Cirino — clasp the white cloths that wrapped them as infants.

The saints, three brothers martyred in third century Italy, are at the heart of Carmen and Sherry Giuffrida’s life.

In 1999, the couple had been married a year and they wanted children. But doctors in Boston and New York told them there were medical reasons preventing them from having their own children, Sherry said.

The couple tried. Sherry had surgery and endured six miscarriages. They felt frustration bordering despair — to a degree that is hard to imagine now.

“(We) are sitting here with the four kids, so it is hard to imagine the state we were in,” Sherry said.

At that point, Carmen did what came natural to him. Each day he prayed fervently to Saint Alfio, Saint Filadelfo and Saint Cirino, and, each September, he took extra steps to help make the dream of a family a reality.

Carmen was born in Lawrence, a street over from where throngs of visitors on Labor Day weekend celebrate the Feast of the Three Saints.

Immigrants from Sicily brought the feast tradition to Lawrence nearly a century ago.

For 91 years, generations of families have cherished the feast’s drama, fun and spiritual connection. Organized by the St. Alfio Society, of which Carmen is a member, the three days unfold with a torch-light procession, games, Italian food, procession of the saints, confetti and fireworks. Feast-goers celebrate the ascension of the souls of the three saints in the festival’s Moment of Glory.

In the year 253 the three brothers, who refused to denounce their Christian faith, were tortured and ultimately executed by Roman soldiers, St. Alfio, the outspoken one, had his tongue pulled out. Legend holds that the saints’ intercession delivered miracles to those who prayed to them.

Carmen and his wife needed a miracle. For Carmen, who grew up with the saints, it was as natural as breathing for him to turn to the three saints for help.

As a child he was a Celtics fan, a Larry Bird devotee. But Carmen’s father never talked sports. He spoke about the saints — the three brothers.

Later, when Carmen was a young adult, his father, John, got sick.

At the time, 1992, Carmen was a college student studying abroad in Italy, and was visiting his aunt, his father’s sister, who lives in Italy. Together, they went to a religious feast honoring patron saints, the Old World version of what Lawrence feast-goers do each September.

Carmen saw a spectacle: from all directions lines of people streamed over mountain paths bearing torches and candles to the holy site, each with their personal prayer to the saints. Some held heavy candles. Some were barefoot and had walked many miles.

Carmen was invited to join the walk and he prayed to the saints for his father return to health. His father pulled through surgery and got well.

Later, in the midst of Carmen and his wife’s struggles to start a family, Carmen again turned to the saints. This time for a another miracle, for children of his own.

He prayed vigilantly and, in September 2000, made his first walking trip to the St. Alfio Society building and Corpus Christi Parish, the site of the Lawrence feast. In those years the Giuffridas lived about a mile-and-a-half from the church.

In the months that followed, he and Sherry still had no children.

The next year, a cousin suggested to Carmen that he walk to the feast site the way the faithful do in Italy, wearing a red cloth, carrying heavy candles.

Carmen ordered the biggest candles he could find. He would walk barefoot and wear a red cloth and bear the candles to the Lawrence feast, in just the way he had seen feast walkers walk in Italy.

“It was a complete unexpected miracle,” Sherry said.

The family’s devotion to the saints continues to this day. The Giuffrida home holds statues, pictures and figures of the saints on the refrigerator, on walls and on shelves.

Ten to 20 times a day Carmen will touch, kiss and pray to the saints.

And again this year, on the day of the saints’ procession, Sunday, Carmen will walk five miles, barefoot from his Methuen home to Lawrence.

He will carry five four-foot-high candles, one candle for each member of his family.

Sherry Giuffrida said the faith held by those who venerate the saints, and the faith they share, is a network that connects them all.

Carmen Giuffrida prayed hard for a miracle, for a family. He is forever grateful to the three brothers from the third century.

“When life has its challenges or ups and downs you can always pray to the saints,” he says.