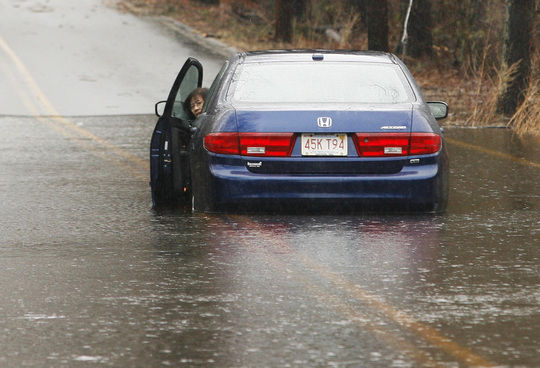 North Andover resident Diana Nguyen waits for help after getting stuck on Lawrence Street in Boxford just over the North Andover town line. 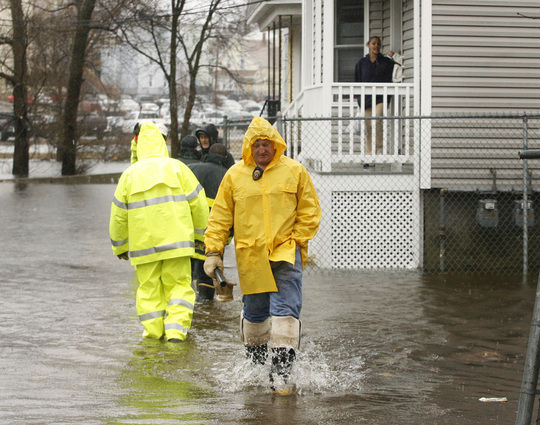 Building Inspector Greg Arvanitas trudges through the flood water as firefighters and police go door to door on Willow Street in Lawrence, helping residents move their cars and turn off their power yesterday afternoon.

North Andover resident Diana Nguyen waits for help after getting stuck on Lawrence Street in Boxford just over the North Andover town line.

Building Inspector Greg Arvanitas trudges through the flood water as firefighters and police go door to door on Willow Street in Lawrence, helping residents move their cars and turn off their power yesterday afternoon.

The rain kept falling and the water kept rising, resulting in swollen rivers, flooded neighborhoods, blocked roads, and the precautionary evacuation of homes. As if to put an exclamation point on the day, yesterday marked the official start of national Flood Awareness Week.

"This is crazy," said Jose Ventura, as rain and river water rushed down Myrtle Street into his Lawrence neighborhood. Minutes later, police, firefighters and building inspectors started knocking on doors, evacuating Ventura and dozens of other residents who were in danger.

Rain lasting nearly three days swelled the Spicket and Shawsheen rivers to record heights. More than 10 inches of rain fell in the region, much of it pooling on early March's still-frozen ground.

The Shawsheen rose more than 3 feet above flood level to 10.53 feet, the highest in history. The last time the Shawsheen got almost that high was on Oct. 22, 1996, when the river's height measured 10.49 inches.

The Spicket River rose to 9.39 feet above it's 8-foot flood level. The river is expected to crest today at about noon to 10.6 feet.

A flood warning for the Merrimack River remained in effect last night for stretches of Lawrence and Haverhill.

As the rivers continued swelling yesterday, residents all over the Merrimack Valley were evacuated, including from Washington Park condominiums and Marland Place assisted-living center in Andover. Officials urged residents to leave parts of Methuen's Morrison Court, Horne Street and Armory Street.

"When they shut the gas and electricity off and knock on the door and tell us to go, we'll go," said Armory Street resident Jean Theberge.

"Everything in the garage is up at least two feet," said Theberge's husband, Tony Suliveras.

In Lawrence, Building Inspector Greg Arvanitis was urging residents in the Myrtle Street corridor to evacuate because as the day, and evening, progressed, the flooding was going to get worse.

It wasn't as bad, but it was still pretty tough, particularly for folks who got knocked out of their homes and were forced to spend the night with family, friends or at Lawrence's Arlington School, a regional emergency shelter that opened yesterday.

"The police came in and said, 'We need you to get out of here,'" said Gisell Morales, who, along with her boyfriend, Wellington Baez, and two sons, sought shelter at the Arlington School last night.

The family, who moved to a third-floor apartment at 17 Willow St., Lawrence, two months ago, got a lift out of their submerged neighborhood on the back of a flatbed truck. Without gas, heat or electricity, which were shut off as a precaution, there was no way they could stay in their home last night, the couple said.

The evacuation was a just another stroke of bad luck for the two, who are both unemployed. Morales formerly worked in a factory and Baez worked in a machine shop. With family in New York and Pennsylvania, the couple had nowhere else to go for temporary housing.

As of 6 p.m., just 10 people sought refuge at the emergency shelter. But Deb Duxbury, Red Cross associate emergency director, said the number would likely increase during the night.

"People are still out there, trying to get their things out of the house," she said. Others are still at work and have no idea what they're coming home to, she added.

Rescuers planned to use portable lights to illuminate flooded areas in Lawrence overnight. They planned to monitor the flooding situation and also guard against looting from area homes.

Bay State Gas workers shut off service to some Methuen residents near the Spicket and Merrimack rivers, Mayor William Manzi said. Any apartment that doesn't have utilities is legally required to be evacuated, Manzi said.

Methuen was in a state of emergency, along with the state, Manzi said.

As of last night, Methuen schools were scheduled to be open today. Manzi said officials would re-evaluate that at 4 a.m. today.

"As long as the schools have utilities and we can get in and out of the schools ... there will be no reason to cancel school," he said.

In Lawrence, at the Mary Immaculate Nursing/Restorative Center, an 865-foot portable dam was wrapped around the building. Administrators purchased the portable dam after the Mother's Day flood, which flooded the center, forcing the evacuation of dozens of residents. Stewart Goff, an MI administrator, was happy to report yesterday that the dam's installation appeared to be precautionary. Water from the nearby Spicket River wasn't coming near the dam, he said. And he wasn't anticipating any problems if the Spicket crested at 9.65 feet at 2 a.m. this morning, as predicted.

"At this height, we do not expect that any floodwater will enter our parking lot, but as a precaution we erected our Portadam," Goff said. "We'll probably take it down Wednesday or Thursday in light of the clearing weather forecast."

National Flood Awareness Week runs though March 19 and is observed annually to educate people about flooding causes and dangers, according to information posted on the National Weather Service Web site.