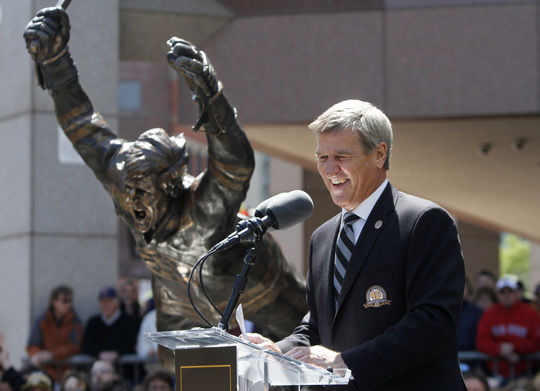 AP Photo Boston Bruins hockey great Bobby Orr addresses a crowd during an unveiling ceremony for a statue of Orr, in front of the TD Garden in Boston yesterday. The statue depicts Orr in the defining moment when he scored in overtime in 1970 to earn the Bruins a Stanley Cup victory over the St.Louis Blues. 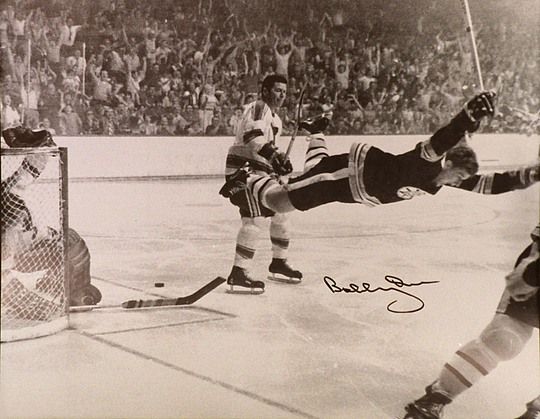 Bobby Orr soars after scoring the winning goal in the 1970 Stanley Cup.

AP Photo Boston Bruins hockey great Bobby Orr addresses a crowd during an unveiling ceremony for a statue of Orr, in front of the TD Garden in Boston yesterday. The statue depicts Orr in the defining moment when he scored in overtime in 1970 to earn the Bruins a Stanley Cup victory over the St.Louis Blues.

Bobby Orr soars after scoring the winning goal in the 1970 Stanley Cup.

Ray Lussier of Atkinson was the right photographer in the right place at the right moment.

When a competing photographer vacated his spot to buy a cold beverage, Lussier grabbed it just long enough to capture one of the most famous sports photographs of all time: Bobby Orr flying through the air after scoring the Game 4 overtime goal that won the Bruins their first Stanley Cup in 29 years. Actually, Orr was tripped by an opposing defenseman.

That moment was commemorated yesterday, when Orr unveiled a statue of himself in flight. The statue, created by Harry Weber, is near the Bruins' home, TD Garden in Boston, about 20 yards from Causeway Street. Orr was joined by former teammates Johnny Bucyk, Derek Sanderson, Ken Hodge Sr., Johnny "Pie" McKenzie, Don Marcotte and Gary Doak.

It was May 10, 1970, and Orr was at the height of his prowess. Lussier, shooting for the old Boston Record-American, was assigned to cover Game 4 at the Boston Garden. If the Bruins beat the St. Louis Blues and won the Cup, the Record-American wanted Lussier there to capture the celebration that was sure to follow.

Lussier was given a spot at the east end of the rink, according to his brother-in-law Roger Avery of Methuen. The action, however, was on the other side.

"He decided to change positions," recalled Avery, whose wife, Elaine, is the sister of the late Claire Lussier, the photographer's wife. A competing photographer on the other side stepped away from the action to get a beer — the temperature was 93 degrees that day and it was stifling inside the Garden — so Lussier took the competitor's spot.

His daughter Sandra Richard said Lussier used a Nikon that could take "multiple shots in a short time." He took the position just in time to snap Orr as he flew through the air, parallel to the ice, after he was tripped by St. Louis' defenseman Noel Picard. He had just fired the puck past goaltender Glenn Hall in overtime.

When the rival photographer returned, he told Lussier to leave, according to his son, Randy Lussier. The victorious cameraman readily complied.

"He said, 'I got what I needed' and left," Randy said. He also never revealed the name of the thirsty photographer who missed the shot of a lifetime, his son added.

Lussier, who died in 1991 at 59, had deep Merrimack Valley roots. He was born in Lawrence, worked for the Haverhill Journal before he was hired by the Record-American, and lived in Atkinson. Claire and Ray Lussier raised seven children.

Lussier continued to work for the Boston Herald when the Record-American and Herald-Traveler merged in 1972. In 1980, he left the Herald to work as a document restoration technician.

Lussier's picture of Orr after scoring "The Goal" was by far his most famous photo, according to his children. Those who knew him, however, described him as a highly talented photographer.

"He knew his business," said Avery, his brother-in-law.

Richard said her father's photography career began as a hobby.

"He had a dark room in the house," she recalled.

The late Jim Lenane, a veteran Haverhill newsman who worked with Lussier at the Haverhill Journal, wrote in a 1991 Haverhill Gazette column that his former colleague had a talent for "getting to the action while the story was still happening."

Forty years ago, that gift served him and thousands of Bruins fans well.