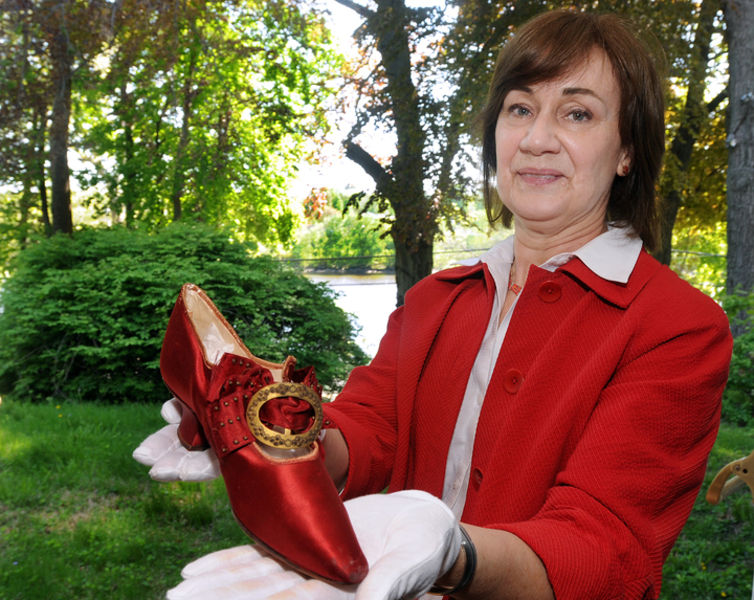 Buttonwoods Museum curator Jan Williams holds the shoe that was entered into the 1893 Chicago World's Fair on behalf of Haverhill. The upcoming Soles of Haverhill event features large shoe sculptures based on the historic shoe. 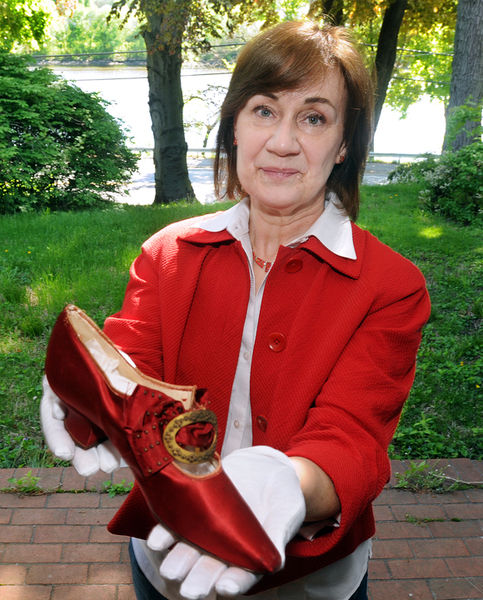 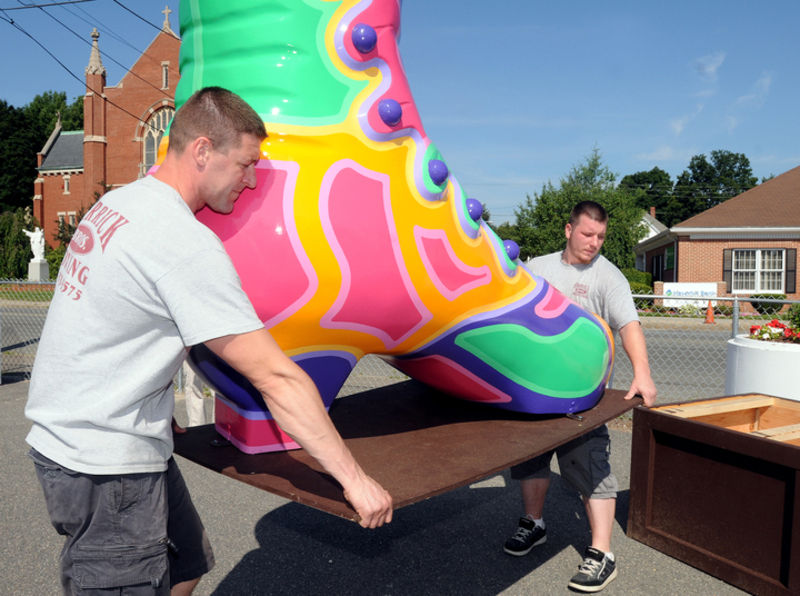 This large shoe statue, carried by Brad Henderson (left) and Steve Brunelle of Ferrick Bros. Moving Company in Haverhill, is put on display next to Sacred Hearts School in 2009 as part of the first Soles of Haverhill event. 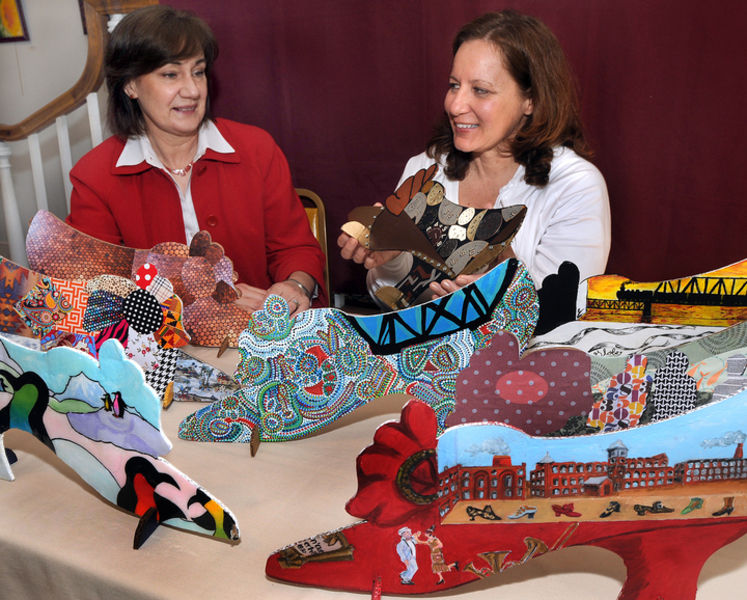 Buttonwoods Museum curator Jan Williams holds the shoe that was entered into the 1893 Chicago World's Fair on behalf of Haverhill. The upcoming Soles of Haverhill event features large shoe sculptures based on the historic shoe.

This large shoe statue, carried by Brad Henderson (left) and Steve Brunelle of Ferrick Bros. Moving Company in Haverhill, is put on display next to Sacred Hearts School in 2009 as part of the first Soles of Haverhill event.

HAVERHILL — It’s time to take a walk into Haverhill’s past.

Those big, colorful shoe statues that showed up in front of local buildings five years ago, reminders of the city’s shoe-making history, are expected to get some company.

But for that to happen, the public must help.

Just two weeks remain for businesses, nonprofit groups and individuals to sponsor a “big shoe” for the 2014 edition of Soles of Haverhill, which has the theme “Fashion Forward.”

Each permanently installed public sculpture will double as a durable bench and a plaque recognizing the sponsoring business, organization or individual.

Two dozen designs are available to choose from for the remaining five shoes to be sponsored. Each sponsorship packet comes with an album of available designs and an explanation by the artist of how the designs relate to Haverhill’s fashion history and landscape.

The new sculptures and the statues placed across Haverhill in 2009 harken back toward the city’s shoe-manufacturing history. For generations, Haverhill was one of the world’s leading makers of women’s shoes until the late 1960s, when the industry died out locally.

The shoe-shaped statues were painted by local artists and sponsored by businesses and organizations that paid for them.

This year’s sculpture form was inspired by a special shoe from the local Buttonwoods Museum’s collection, That shoe was Haverhill’s entry into the Chicago World’s Fair in 1893, also called the Columbian Exposition, which marked the 400th anniversary of Columbus’ arrival in the New World. The beautiful red slipper has been redesigned at a scale suitable for installation along a public sidewalk, and incorporates bench seating for two people, said Alice Mann, vice president of the Team Haverhill organization. That group is helping organize the Soles of Haverhill project.

Sponsorship levels start at $3,000, and one restaurant owner recently expressed surprise that no ongoing payment was required to promote his business year after year with a sculpture in a nearby location, Mann said.

The deadline for sponsor commitments is June 6, so artists have enough time to execute their unique designs for unveiling in late September, during Essex County’s Trails and Sails festival weekends.

Mann said the annual Trails and Sails celebration of art, history and natural resources will also include several other Soles of Haverhill events, including a pop-up museum exhibit on the making of a shoe and a parallel exhibit at the Buttonwoods Museum of other works by artists who submitted this year’s designs.

More than 5,000 people participated in last year’s Trails and Sails events, which are promoted by Essex Heritage with print and online event listings, Mann said.

More than a dozen shoe designs are still available for sponsors to select from. Many of the artists involved are well-known locally and regionally for their works in a wide variety of media, including previous public art installations in Haverhill, Boston and Dedham. Others are newer artists who bring fresh approaches to this design challenge.

Students in the after-school Discovery Club at the Consentino School created this year’s first shoe statue, with the help of local muralist and Artist in Residence Elizabeth Persing. The shoe is a whimsical accompaniment to the Bradford Rail Trail mural, which features animals and plants living along the Merrimack River.

Businesses, organizations and individuals are eligible to become sponsors.

They should contact Eric Karlstad at 978-228-1060 or Alice Mann at info@teamhaverhill.org for information and an album of available designs.

Lawrence - Madeleine "Maddy" (Waye Descoteaux Brown), 87, passed away on April 5, 2020. Maddy was born to Irene and Charles Waye in Nashua, N.H., on December 17, 1932. She was predeceased by her parents; a brother Charles Waye; and husbands, Louis G. Descoteaux of Nashua, N.H., and George Br…