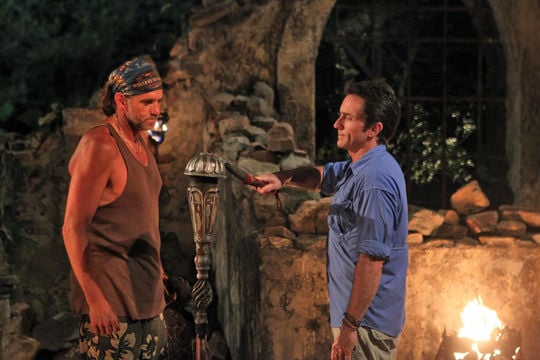 Jimmy Tarantino has his torch snuffed out by host Jeff Probst after being voted off during the fourth episode of “Survivor: Nicaragua” last year. 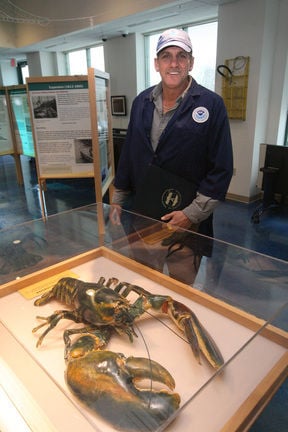 James “Jimmy T” Tarantino, a government seafood inspector and recently a contestant on “Survivor: Nicaragua,” will give a talk about his experiences at NOAA headquarters in Gloucester Monday night.

Jimmy Tarantino has his torch snuffed out by host Jeff Probst after being voted off during the fourth episode of “Survivor: Nicaragua” last year.

James “Jimmy T” Tarantino, a government seafood inspector and recently a contestant on “Survivor: Nicaragua,” will give a talk about his experiences at NOAA headquarters in Gloucester Monday night.

What's it like to be on TV? Are reality shows really real?

Gloucester "Survivor" James "Jimmy T" Tarantino, whose appearance on the popular CBS reality hit sparked downtown Gloucester viewing parties when his shows aired last fall, will answer those and other questions Monday night when he and the National Oceanic and Atmospheric Administration host a free presentation on his "Survivor Nicaragua" adventure from 7 to 9 p.m. at NOAA's auditorium in Blackburn Industrial Park.

Tarantino said Wednesday there are still a few things he can't talk about regarding the production of the series, which was filmed in Nicaragua last spring and early summer. But there is also a lot he can discuss, now that the series is over and Los Angeles student Jud "Fabio" Birza walked off with the title — and the $1 million prize.

"The people who know me know — I'll be entertaining," Tarantino quipped.

The program is free and open to the public. NOAA is sponsoring the event as a free community lecture; Tarantino works as a NOAA seafood inspector.

Tarantino said he plans to show footage that he took with a personal camera at the Survivor site — plus he has footage shot by a fellow cast member as well.

"When we would got voted off, they (CBS) gave us each a disposable camera to use as we wanted," Tarantino said. "So I shot a bunch of stuff."

Producers, however, didn't give the cast members the footage or photos until after the live reunion in December to protect show security.

"I got mine, but that Shannon guy (fellow cast member Shannon Elkins) copped an attitude and said, 'What do I want with this?'" Tarantino related. "I said, 'Hey, I'll take it — so I have what he shot, too."

Tarantino said he will bring other souvenirs from the show, including his clothes from the show, his buff, his drinking water bottle and other memorabilia. He made it to the fourth episode — and outlasted former NFL coach and current football commentator Jimmy Johnson — before his fellow Espada tribe members gave him the boot.

NOAA Sector Outreach Specialist Olivia Rugo said the agency is ready to host a crowd. Anyone with questions about Tarantino's appearance may contact Rugo at 978-675-2167.

Tarantino began his bid to earn a spot in the cast by sending a video to "Survivor" as part of a contest sponsored by Sears. The contestants whose videos drew the most support were invited to Los Angeles for an audition — and Tarantino drew extensive online voter support from Gloucester residents to get his shot.

In early August, CBS' "Survivor" website announced the cast and confirmed that Tarantino — who had been reportedly carrying out seafood inspection duties in the Gulf of Mexico — had locked a spot on the show, and had been in Nicaragua for the filming.

Now, more than six months after the filming, Tarantino said he still thinks — a lot — about what he could have or shouldn't have done to come away with what he calls' "the brass ring" — the show's $1 million prize.

"Anybody who's as competitive as I am can't help but think about that — and what I would do if I ever got the chance to do it again," he said.

After talking with former contestants and others, Tarantino said, "I know exactly what I would do — real specific things I would do. And if I ever, ever got the chance to go back and go do it again, I know I'd win it.