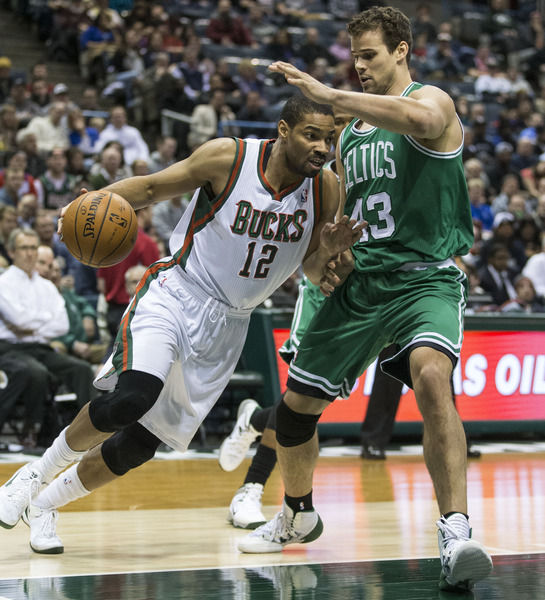 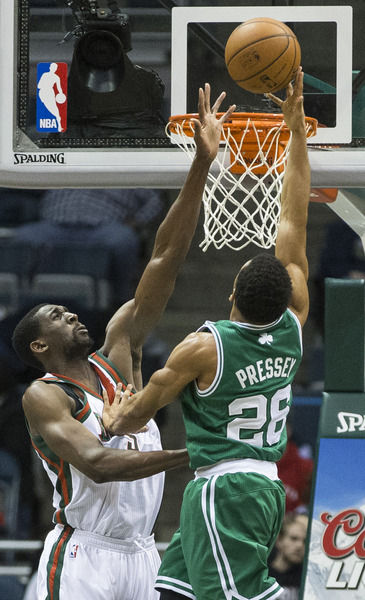 Milwaukee Bucks' Ekpe Udoh attempts to block the shot of Boston Celtics' Phil Pressey during the second half of an NBA basketball game, Monday, Feb. 10, 2014, in Milwaukee. (AP Photo/Tom Lynn) 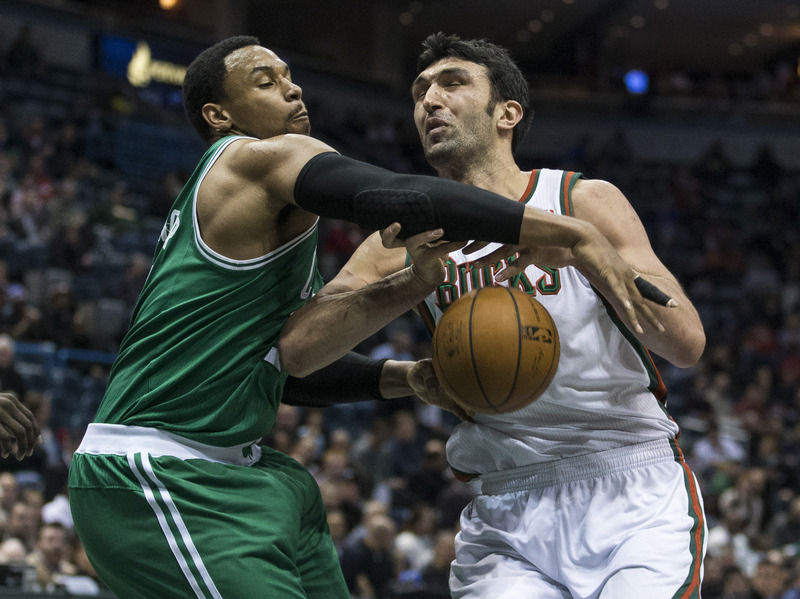 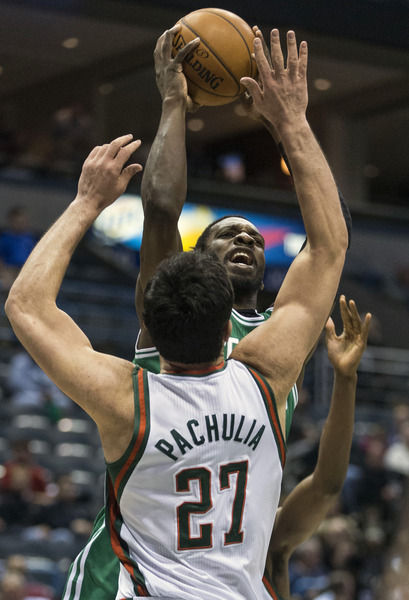 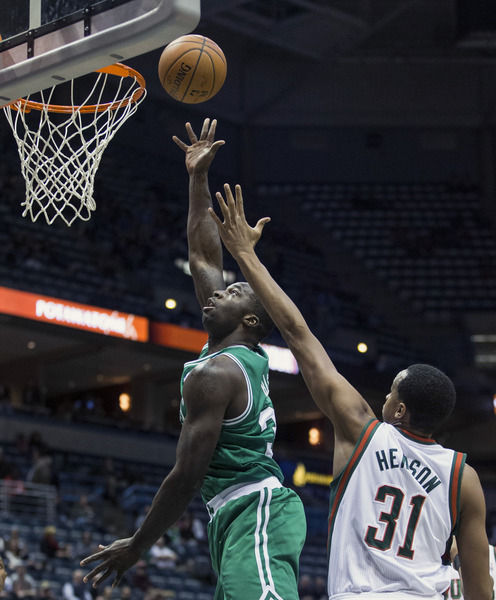 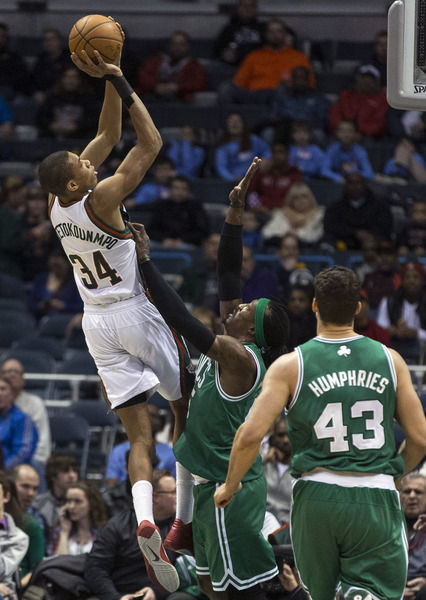 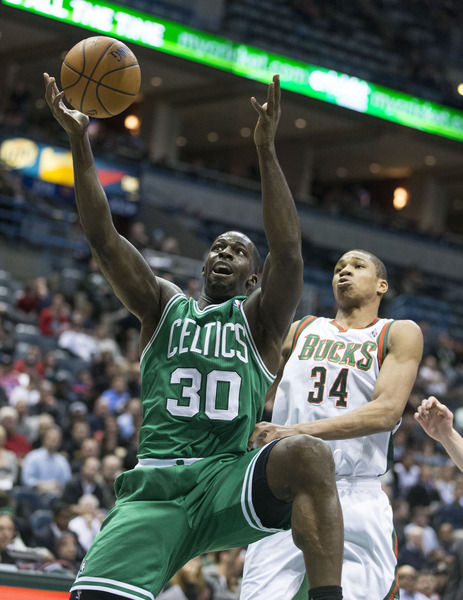 Milwaukee Bucks' Ekpe Udoh attempts to block the shot of Boston Celtics' Phil Pressey during the second half of an NBA basketball game, Monday, Feb. 10, 2014, in Milwaukee. (AP Photo/Tom Lynn)

The team’s leading scorer clearly got the message.

Green scored 19 of his 29 points in the second half, leading the Celtics to a 102-86 win over the Milwaukee Bucks on Monday night.

“He passed one up in the first half that I was mad at him about,” Stevens said. “That was kind of the gist of our halftime talk. We can’t pass up open looks because that’s what they were giving us. He really didn’t pass any others up. He missed his first one of the third quarter and then really shot it well the rest of the night.”

Green shot 11 of 22 from the field and 6 of 7 from the free-throw line as the Celtics broke open a tight game in the fourth quarter.

“I am confident in every shot I put up,” Green said. “Whenever it leaves my hand, I am confident that it will go in. I kept shooting, and they started to fall. That is my game, driving to the rim.”

Stevens said Green has saved his top performances for weekday games on the road.

“That’s when he’s played his absolute best,” Stevens said. “He hit shots today that were really good shots and then he made some tough ones late. He got himself going by getting to the basket and by shooting it off screens.”

Kelly Olynyk added 14 points and 11 rebounds for his first career double-double for the Celtics.

“They were helping a lot on Jeff in the lane in the fourth quarter and I was able to get a couple of open shots as well,” Olynyk said. “We pushed the ball in transition and got some easy baskets. Jeff hit a bunch of big-time shots for us down the stretch.”

The Celtics used a 12-4 run to start the final quarter to break things open. Green had seven points during the spurt and 11 overall in the quarter, while Olynyk scored 10 after Boston entered the fourth clinging to a 70-68 lead.

Jared Sullinger added 13 points and 10 rebounds for Boston, and he drew praise, along with Olynyk, from Stevens.

“They can handle the ball,” he said. “They can do all kinds of things. It was good to see them both with double-doubles. I was pleased with how those two young guys played.”

Brandon Knight had 22 points for Milwaukee, which also got 17 points from Gary Neal and 16 points from John Henson, who left late in the game with a foot injury.

“We went flat. Our energy went down and they took advantage of that,” Knight said of the Bucks’ fourth-quarter performance.

“We had more turnovers than assists. It’s tough to win like that,” said Bucks center Zaza Pachulia, who had eight points and eight rebounds starting in place of injured Larry Sanders.

Bucks coach Larry Drew was disappointed about his team’s lack of energy in the game-changing fourth quarter.

“(The Celtics) played (Sunday) night, but they seemed to be playing with more energy than we did,” Drew said.

The Celtics held a 49-46 advantage at the half despite shooting just 40 percent. Brandon Bass led the way with 12 points. Knight had 14 first-half points for the Bucks, who shot 44 percent. The Celtics had 11 second-chance points compared to just one for the Bucks.

It was back and forth through the first two quarters with 10 lead changes and six ties.

Boston held a 26-24 lead after the first quarter, sparked by Bass, who had all 12 of his first-half points in the quarter.

“He just manhandled us down on the block. He’s a bruiser,” Drew said. “He loves to catch the ball down low. We didn’t accept the challenge on Bass.”

Notes: Sanders was diagnosed with a fractured orbital bone in his right eye. He was injured when he was elbowed by James Harden in Saturday’s game against the Houston Rockets. He’s expected to be out at least through the All-Star break, Drew said. ... The Bucks also were without Caron Butler (ankle), Ersan Ilyasova (back) and O.J. Mayo (illness). Luke Ridnour (back) and Ekpe Udoh (ankle) returned to the lineup. ... Celtics G Rajon Rondo sat out after logging a season-high 37 minutes Sunday. He’s been limited from playing in back-to-back games as he recovers from ACL surgery. “I think he’ll be playing back-to-backs very soon,” Stevens said. ... Celtics’ starting G Avery Bradley (sprained right ankle) also was out of the lineup. He’s scheduled to undergo an MRI on Tuesday.