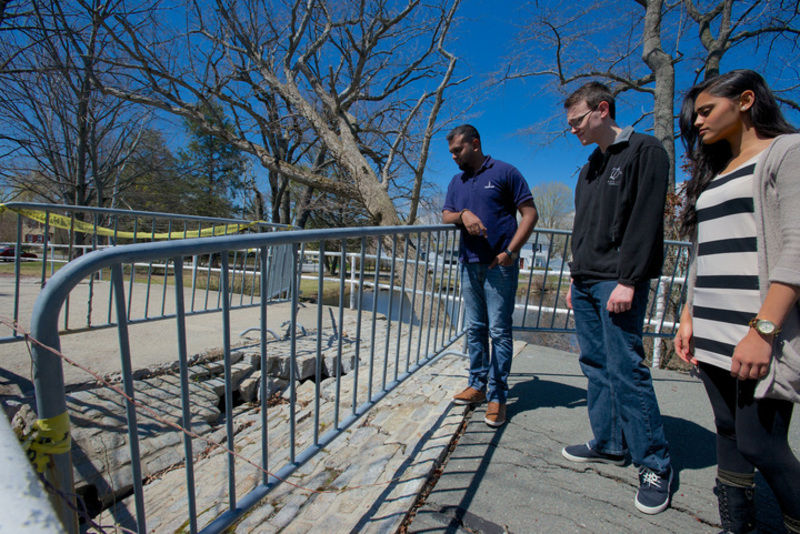 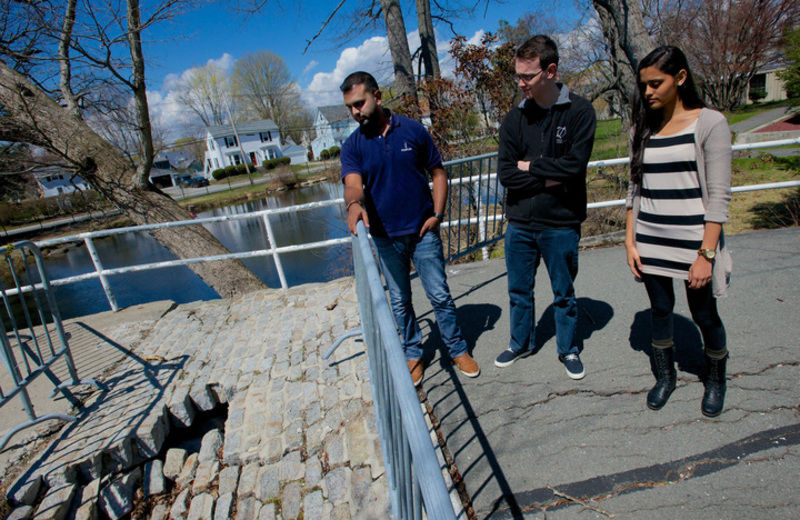 Northpoint Bible College students from left, Aaron Thomas, 27, of Dubai, Brendon Norton, 21, of New Hampshire and Sandy-Catherine Rodriguez, 20, of New York, survey the damage to the bridge that spans Tupelo Pond and connects the college's dorms with its main campus.

Northpoint Bible College students from left, Aaron Thomas, 27, of Dubai, Brendon Norton, 21, of New Hampshire and Sandy-Catherine Rodriguez, 20, of New York, survey the damage to the bridge that spans Tupelo Pond and connects the college's dorms with its main campus.

HAVERHILL — It has long served as the quintessential image of a New England college campus.

The quaint stone and metal bridge arcing over Tupelo Pond on the campus of Northpoint Bible College was used for decades by students crossing the pond that links historic buildings at the front of the property to dormitories at the rear of the former Bradford College campus.

It has also been a favorite of area residents who enjoy walks through the campus as well as artists who have used Tupelo Bridge as the subject of paintings and photographs.

Last year, continued deterioration forced Northpoint to close the bridge to traffic. Students were forced to detour around the perimeter of the campus, including during bad weather.

Now, Northpoint is looking to replace the old bridge with a new and longer one.

Kathy Arnett, director of advancement at North Point Bible College, said the existing bridge was condemned by two structural engineers the college hired to inspect it.

“They came in to determine if it could be repaired, and both determined it could not,” she said.

The bridge is located at Tupelo Pond, which is behind the Fine Arts Center, and is primarily used by students going back and forth between the college and the dorms. But it is also used by the general public.

The bridge has been closed to pedestrian traffic for about a year.

When researching the structure, the college found that there were wetlands regulations that impacted the project.

Arnett said the project would expand the length of the bridge from 20-feet to 40-feet, primarily due to regulations that don’t allow for replacing the footings in the water and must build new footings outside the pond that won’t interfere with the natural habitat.

“The regulations call for not harming any wildlife, any creatures that live in the water,” Arnett said. “Their habitat can’t be disrupted at all.”

Arnett said the college is currently seeking approval of the bridge plan from the city’s Economic Development and Planning and Conservation Department.

“Everything done on the bridge project will meet the state and municipal requirements,” she said.

Arnett said the plan calls for bringing in Baldwin Crane & Equipment Corp. of Wilmington to lift the old bridge up and away.

“It’s gone from let’s repair the bridge to a major project,” Arnett said.

Arnett said that when Bradford College closed in 2000, security guards drove over the bridge, which she believes was never intended to support a full size vehicle. That damaged the bridge as did weathering, she said.

“Basically we have an old bridge that’s falling down,” Arnett said.

She said the new bridge will be made of steel with granite columns at each end and its design will fit the aesthetics of the campus. A new bridge will cost between $300,000 and $400,000, which includes the engineering surveys, bore testing, the site civil plan completion, design, bridge fabrication, site preparation, removal of old materials, and installation of the new bridge.

Northpoint is in the process of launching a capital campaign. The community can make donations online at www.northpoint.edu/bridge.

“The company that is working with us is donating to the project but but we’re hoping to raise the remainder of $100,000,” Arnett said.

Northpoint plans to begin the project in June, and have the new bridge open by the time school resumes in the fall.