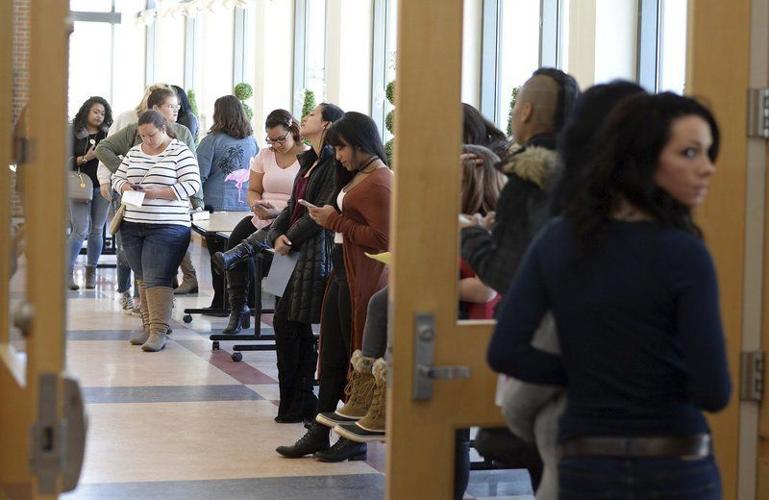 RYAN HUTTON/Staff photoLocal residents line up in the hallway of Northern Essex Community College's Hartleb Tech Center in Haverhill on Sunday for a casting call from Valentine's Day Productions of Melrose for "Daddy's Home 2." 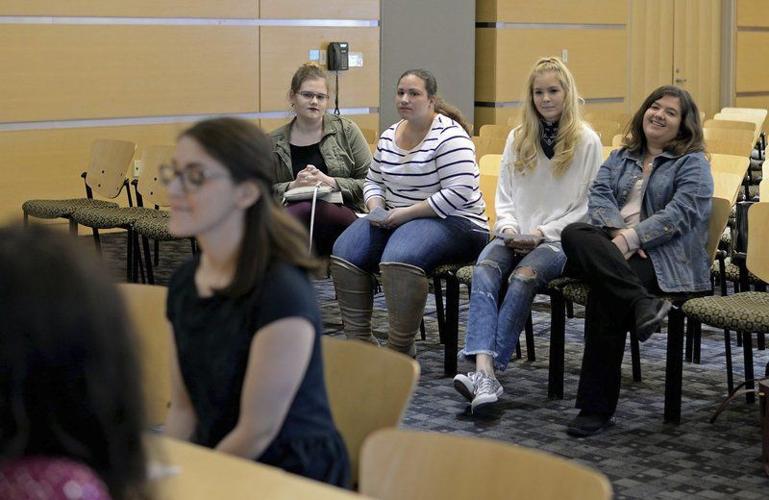 RYAN HUTTON/Staff photoLocal residents wait their turn as Katie Formosi of Groveland is interviewed Sunday during a casting call at Northern Essex Community College's Hartleb Tech Center for a film, "Daddy's Home 2," being produced by Valentine's Day Productions of Melrose.

RYAN HUTTON/Staff photoLocal residents line up in the hallway of Northern Essex Community College's Hartleb Tech Center in Haverhill on Sunday for a casting call from Valentine's Day Productions of Melrose for "Daddy's Home 2."

RYAN HUTTON/Staff photoLocal residents wait their turn as Katie Formosi of Groveland is interviewed Sunday during a casting call at Northern Essex Community College's Hartleb Tech Center for a film, "Daddy's Home 2," being produced by Valentine's Day Productions of Melrose.

HAVERHILL — For the second time in a month, Hollywood has descended upon the city looking for talent to appear in a new motion picture.

And while the city isn't likely to affix a large "Haverhill" sign atop Ski Bradford like the famous "Hollywood" seen in Los Angeles, that hasn't stopped thousands of people from coming to Haverhill in the past few weeks hoping to get a start in "the pictures."

Dozens of aspiring actresses came to Northern Essex Community College on Sunday to audition for a film trilogy produced by Valentine's Day Productions of Melrose.

While the first audition March 12 sought extras for "Daddy's Home 2," a sequel to the 2015 comedy hit starring Will Ferrell and Mark Wahlberg, the audition Sunday sought actresses between the ages of 17 and 35 for a much larger role.

Jon Valentine, president of Valentine's Day Productions, said prior to the five-hour casting call at NECC's Hartleb Technology Center that he was seeking 12 actresses for the production, described as a "wholesome" action-adventure film in a similar vein to the "Harry Potter" series.

"I need to fill about a dozen roles and the smallest requires a week's worth of work and comes with a pay of $10,000, plus expenses," Valentine said last week, adding that a female lead would be paid in excess of $100,000 for her role.

While the "Daddy's Home 2" casting, held at American Legion Post 4 near Haverhill's border with Atkinson and Plaistow, New Hampshire, drew over 2,500 people from all over the state and New England, the clientele at Sunday's call was more localized — and the dreams of those auditioning far more serious.

"I majored in theater arts at Dean College, I've done auditions here and there. I love doing plays," said Maura Currington, 23, of Haverhill, who works by day as a teachers aide at Pentucket Lake Elementary School.

Currington said she is saving up to attend an acting school in New York City this summer and lists Gary Oldman and Daniel Day-Lewis as two of her favorite actors.

A foursome of local actresses who have made names for themselves during productions at Whittier Regional Vocational-Technical High School were also on hand to see if the three casting agents from Valentine's Day thought they had what it took.

Erin Archambault, Rachel Anderson, Melissa Cepeda and Alyssa Pollier are veterans of the Whittier drama department, having worked on productions including "Grease," "The Addams Family," "All Shook Up" and "Working," the school's most recent musical.

To prepare for "Working," Cepeda, 16, of Haverhill visited restaurants around the city and also watched waitresses when her family went somewhere to eat.

"I really had the opportunity to develop my character," Cepeda said, as she sat next to her proud father and mother, Josefi Cepeda and Belkis Hernandez.

Valentine told The Eagle-Tribune last week that the film's story will follow two main characters on a journey guided by a female mystic and that he has shied away from hiring big-name actors and actresses for the film, which begins shooting in 2018.

Northern Essex alumni such as Hannah Guselli dotted the audition Sunday. The 22-year old Haverhill native transferred from the school after a year and a half and is now majoring in theater at Fitchburg State University.

"I was just too scared to do (plays) in high school. I just started taking it seriously at Fitchburg," said Guselli, who lists Zoe Saldana, Scarlett Johansson and Jennifer Lawrence as her favorite actresses.

Asked how she heard about the casting call, Guselli said she found out about it from an old Sunday school acquaintance.

"They told me about it on Facebook and said, 'You need to do this,'" she said.

Haverhill residents were not able to completely hog the spotlight Sunday as Grant and Jasmine Bellino of Amesbury were among several other Merrimack Valley performers at NECC.

While Jasmine, 17, was the only Bellino auditioning, her older brother, who plays basketball for the NECC Knights and performs in theater productions at the school, was there supporting his sister.

"I caught the acting bug recently. I'm pulling kind of a Troy Bolton," said Grant Bellino, referencing Zac Efron's performance as a jock-turned-actor in "High School Musical." Bellino said he will perform in NECC's upcoming production of "Lonestar" on April 12-15.

His kid sister, who is inspired as an actor by the late River Phoenix, said she, too, has always played sports, but acting has always been "in the back of her mind."

Just like the "Daddy's Home 2" casting, there were some performers who traveled to Haverhill to meet with the casting agents and to get their picture taken.

"It's always been a passion and something we've been chasing together," said Rachel Nunes, 22, of Fall River, who auditioned with her sister, Amanda Pustelnikas, 22, of Lakeville. "We heard about it through a casting call website. We've always acted in plays together in community theater."

Ann-Marie Spirito, 18, traveled from Auburn, New Hampshire, with her grandmother Lillian Cloutier, hoping she would be discovered.

Prior to graduating from Pinkerton Academy, Spirito participated in plays with the school's drama club, the Pinkerton Players, and sang in a chorus for five years.

"If I wasn't performing, I was always helping out backstage," she said.