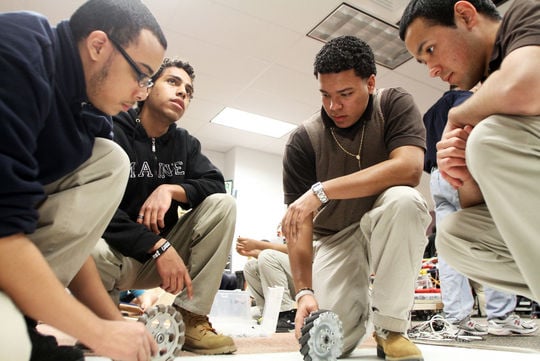 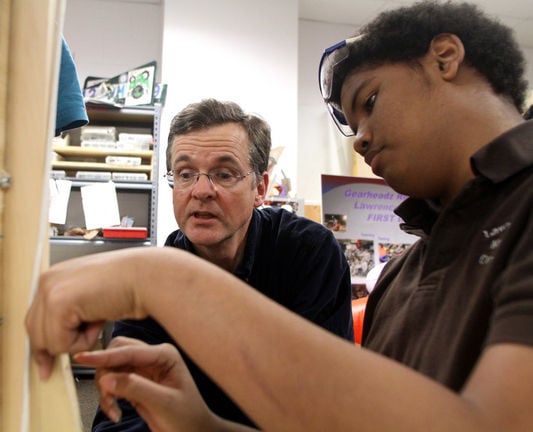 Art Rousmaniere, a mentor for the Lawrence High School robotics club, “The Gearheadz,” instructs sophomore Henry Marte, 16, right, as they plan out measurements for a robot.

Art Rousmaniere, a mentor for the Lawrence High School robotics club, “The Gearheadz,” instructs sophomore Henry Marte, 16, right, as they plan out measurements for a robot.

After school, Raynner, 17, a senior in the Health Leadership Academy at Lawrence High School, puts on protective glasses to work with an electric drill or to cut wood.

"This is fun because I've never used power tools before, and I'm helping build something," said Raynner, one of 35 members of Gearheadz the robotics team at Lawrence High. She is one of just four female members.

Gearheadz recently hosted a demonstration of last year's robot - Lancerbot is its name - at the Claddagh Pub and Restaurant to raise money to compete in the regional competition in March in Manchester, N.H. The team needs $5,000 to make it to the competition.

Team members meet for six weeks to build the remote-controlled robots from a common set of parts - starting with a wooden model.

One day last week, Art Rousmaniere of Andover was helping Juan Cabrera, Ronney Sanchez and Henry Martinez assemble the body and framework of the robot and set up motors, wheels and transmission.

Rousmaniere, a mechanical engineer with Farm Production Development of Hollis, N.H., was supervising the students as they used pine wood, Plexiglas, metal rods, shock cord, bolts and screws. Another group was working on the electrical component, building the sensors, and creating the wiring and pneumatics that run the robot. A third group was writing computer commands to control the robot's mechanics.

This year's competition is called Logo Motion and features 53 teams.

Team members are building a robot that can kick a soccer ball over a foot-tall wooden ramp eight feet away.

In seven years of participation, Lawrence Gearheadz has won the Rookie Inspiration Award in 2004, the Judge's Award in 2005 and the Imagery Award in 2007.

Many of the students in the program enjoy playing video games and want to pursue careers in engineering. They said the experience on the team will help them with their goals.

"If I could study different types of engineering, I'll be ahead of some of my classmates," said Joshua Morales, a student in the Math, Science and Technology High School.

Joshua, 16, wants to be an aerospace engineer. He has been a Gearheadz member for three years. He joined after hearing about the team from his sister, Mariana.

"I've learned to be a leader, work as a team and help younger students. The experience I'm getting here is invaluable and one I know I'm going to need for college."

Ohilda Difo, a physics teacher at Lawrence High, coaches the Gearheadz, assisted by 10 mentors, who work in different fields of engineering. Coaching the robotics team brings back many memories. Difo was a member of the team while a student at Lawrence High. She graduated with a degree in math from the University of Massachusetts Amherst.

"The students like the fact that they're building something with their hands," Difo said. "They all get a feel for mechanical, electrical and construction."

Difo recruits students by putting up posters at all six academies on the high school campus, but a lot of the students attend the first meeting after hearing from friends.

Gearheadz is part of FIRST, For Inspiration and Recognition of Science and Technology, an annual competition designed to encourage high schoolers to pursue engineering and science careers. The competition has grown from 28 teams in 1989 to about 1,800 this year and now involves several international entries.

"I wish we had something like this when I was in school," said Laura Pritchard, an electrical and computer engineer at Raytheon in Tewksbury.

"It's nice to see the kids taking an interest in science and engineering, learning, participating and asking questions," Pritchard said.

Besides the games the robots play, there's blaring music, flashing lights and play-by-play from a professional announcer while the games are in progress.

This year's robots are built to score soccer goals, hoist themselves on a bar above the ground and support the weight of another robot.