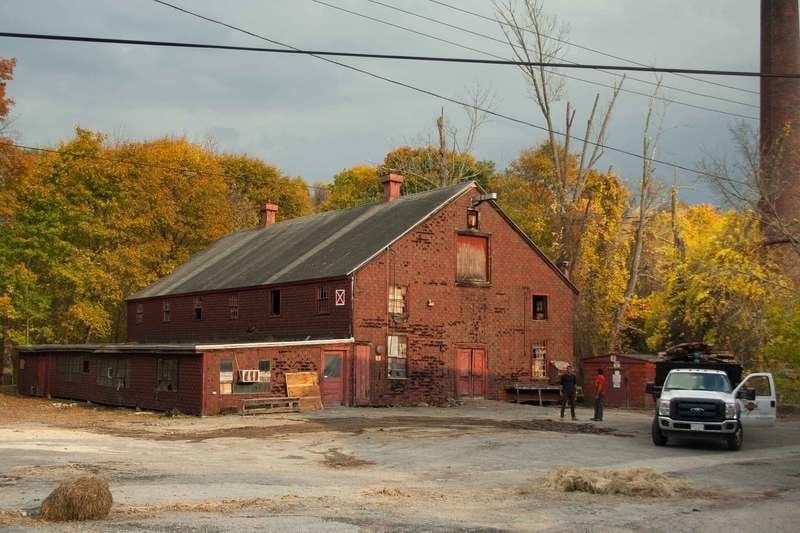 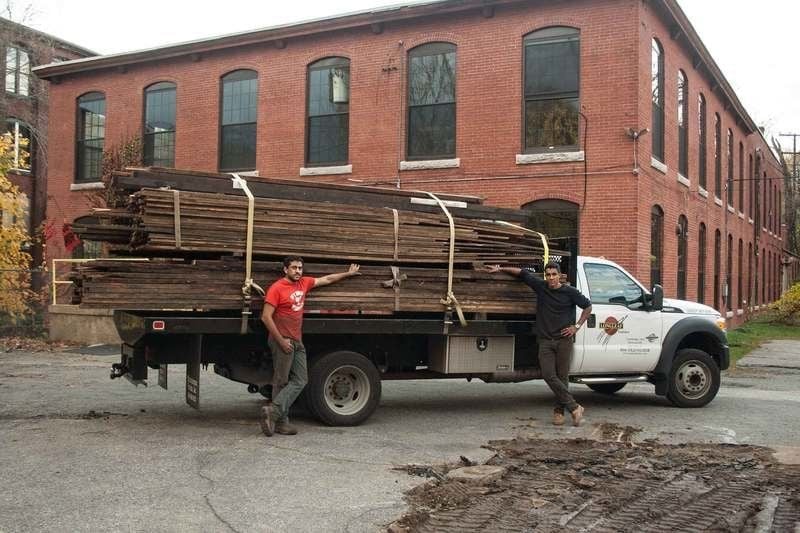 Courtesy photoMario Davila and Wesley Updike of Longleaf Lumber stand with one of the loads of reclaimed wood from the former Abbot Mill barn on Red Spring Road bound for re-milling in Maine.The wood is expected to be re-purposed for use in the main Abbot Mill building, pictured in the background. 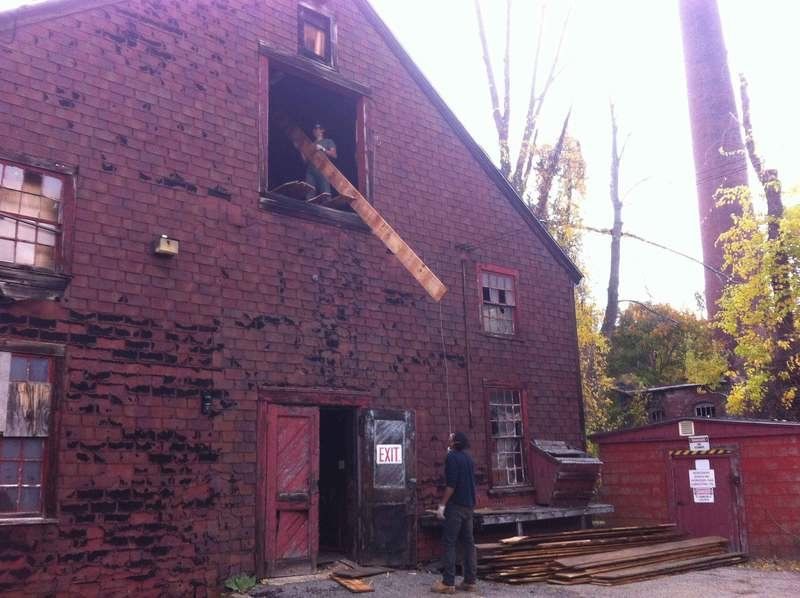 COURTESY PHOTOWorkers from Longleaf Lumber remove wood from the former Abbot Mill barn that is being re-milled for reuse in the redevelopment of the main mill building on the property.

Courtesy photoMario Davila and Wesley Updike of Longleaf Lumber stand with one of the loads of reclaimed wood from the former Abbot Mill barn on Red Spring Road bound for re-milling in Maine.The wood is expected to be re-purposed for use in the main Abbot Mill building, pictured in the background.

COURTESY PHOTOWorkers from Longleaf Lumber remove wood from the former Abbot Mill barn that is being re-milled for reuse in the redevelopment of the main mill building on the property.

Andover’s rich mill history was not forgotten when the barn at the Abbot Mill site on Red Spring Road was demolished last year following a 2013 fire.

The wooden floors, joists and decking of the early 19th century structure were salvaged by a reclaimed and antique lumber company and are expected to be reused in the redevelopment of the still-standing brick mill building on the site.

Although a lease is not yet believed to have been signed, a pizza restaurant is reportedly eyeing the site, according to one person close to the project.

The property’s storied history began in 1807, when Abraham Moreland operated a cotton mill on the land at 18-20 Red Spring Road. Seven years later, brothers Abel and Pasehel Abbot built the first structure at the site, at an engineered bend in the Shawsheen River, and went to work spinning cotton and woolen yarn.

Over the years, the mill building and neighboring 31/3-story, timber-framed barn there were home to a number of manufacturing and industrial tenants, including Smith & Dove Manufacturing Company and Redman Card Company.

The barn became used by the tenants for various purposes, including as a drying shed and yard when Smith & Dove held ownership, according to town preservation records. Later, it served as stock storage, which would have been for raw flax plants before the hackling process. During the Redman Card Co. ownership, the building is listed as cork storage.

In recent years, both the mill and the barn had become vacant. It was the spring 2013 basement fire that finally sealed the barn’s demolition fate as the structure was no longer safe.

That’s when the town’s Preservation Commission group got involved. Because the barn was located in the Andover Village Industrial District, a historic district on the national register, the structure was eligible for preservation consideration before it was allowed to come down.

A one-year demolition delay was approved as the Preservation Commission hoped the structure, which included two working floors and 11/2 floors of loft space, might be bought and restored. That was not to be.

“This is standard and any time we ask for a one-year demolition delay, we hope for the best, but that’s not always what happens,” Preservation Commission Chairwoman Karen Herman said. “The historic value of mills is important, but saving them doesn’t always work out.”

But before the structure was demolished, the Cambridge-based Longleaf Lumber salvaged as much recyclable material as it could from the structure, which was good news to Herman.

“What this is, is preventing something of historical value from going to a landfill,” she said. “Yes, I’m happy about this ... the wood was saved.”

However, Poirier said the age of the structure coupled with the damage from the fire, which did considerable harm before it could be contained, made for tricky work for the salvagers.

The blaze charred both the inside and outside of the building, with the damage most acute in the southwest corner of the third story, where much of the sheathing and roofing was burned, the company reported.

First up for removal were the floorboards. Originally hand-nailed with cut nails, they were difficult to raise, as salvage workers tried not to crack or shatter the boards, Poirier said in a release.

“Despite our best efforts, the brittle boards proved challenging to reclaim — much of it cracked or split during the process,” he said. “After being carefully removed from the building, all of the flooring was de-nailed on site, much of it by hand with hammer/crowbar.”

Next up was the northern hard pine decking on the first floor and third floor landing. While the boards were easy to remove, Poirier said many of them were badly damaged from years of use, and some of them had even been spray-painted orange. But he said a majority of the boards can be re-milled to preserve the “incredible foot-worn patina.”

The last pieces to leave the site were spruce floor joists. After being de-nailed, all of the timbers were shipped for re-milling to the company’s mill in Berwick, Maine.

“The skeletal remains of the Abbot Mill were a testament to its simple and efficient construction; it was built to work and built to last. We’re sad to see the building go, but glad to know that pieces of its history will live on in future uses,” Poirier said in the release.

The exact future of the salvaged materials is not yet known. Ozzy Properties bought the Red Spring Road site a couple years ago and has been renovating the interior of the still-standing former brick mill building for future tenants. A restaurant has been cited as a potential tenant.

Poirier said a pizza eatery is being eyed for the location. Inside it, he said, the preserved eastern white pine floorboards from the barn would likely find new life as wall paneling, while the joists and decking could be recycled as counter or bar tops or repurposed as flooring.

Herman said while she knows nothing about a pizza restaurant planned at the site, she’s just glad that historical wood will be preserved in it.

Meanwhile, next up for a demolition delay in town is a barn at 161 Lowell St. Herman said it’s the oldest barn Andover and was featured on the Andover Historical Society’s holiday house tour this past November.

“We always want to preserve, not demolish,” she said of her group’s mission.

But, there are not yet any buyers for that barn either.