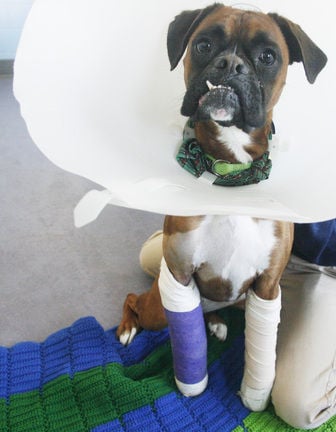 Jackie, a boxer, was left at the MSPCA in Methuen after being hit by a car and her owners were unable to pay an estimated $4,000 for her surgery. 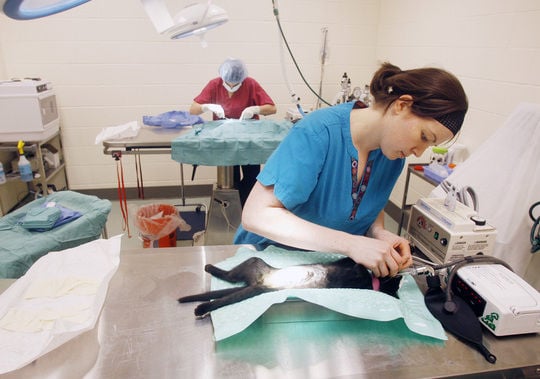 Roger Darrigrand/Staff photos Dr. Rachel Klopfer, background, spays a kitten while veterinary technician Sandra Bolduc preps another earlier this week at the MSPCA shelter in Methuen. Due to the economy, the facility is seeing an increase in the number injured animals surrendered because owners can’t afford care.

Jackie, a boxer, was left at the MSPCA in Methuen after being hit by a car and her owners were unable to pay an estimated $4,000 for her surgery.

Roger Darrigrand/Staff photos Dr. Rachel Klopfer, background, spays a kitten while veterinary technician Sandra Bolduc preps another earlier this week at the MSPCA shelter in Methuen. Due to the economy, the facility is seeing an increase in the number injured animals surrendered because owners can’t afford care.

METHUEN — The staff of the MSPCA's small animal shelter at Nevins Farm first noticed an increase in the number of pets surrendered for adoption during the economic downturn when homes started to be foreclosed.

With that downturn deepening, the shelter is now starting to see injured animals and pets in need of other medical care being surrendered because their owners do not have the money to provide veterinary care for them, said Michael Keiley, shelter manager.

"There have been a number of people calling us with injured or ill pets. Normally, we direct them to do a payment plan with their veterinarian or through Angell Memorial Hospital," Keiley said.

But, he said, with the economy in bad shape, more pets needing medical attention are being surrendered to the shelter. The shelter has four or five dogs and two cats being treated now, he said.

"Each of these surgeries cost a substantial amount of money," he said. "These are cases above and beyond what we normally expect."

He said a dog hit by a car and a cat that had swallowed something that lodged in its intestines have been surrendered.

"It is an extra burden," he said. "The economy is not being kind to us either."

Keiley said the shelter has a fund called Angels for Animals that relies on donations from the public to help pay for the costs of medical treatment.

"We are letting people know what we are dealing with and hope they want to help," Keiley said. We hope people will help out with donations."

He said a boxer had recently been surrendered after being hit by a car. The dog could not walk and the owner called the shelter, Keiley said.

"We had to tell him his options," Keiley said.

Those options were to take the dog to a veterinarian or surrender it. The owner surrendered the dog, who was treated for two broken bones in one front leg and a broken paw on the other front leg.

"He was very upset at surrendering her, but he knew it was giving her the best opportunity for success," Keiley said.

Keiley said, "It was about a week before she could walk." The surgical repairs to the boxer cost the shelter $4,000.

The boxer's sister was surrendered at the same time and the shelter wants to find them a home together, Keiley said.

"The owner made the right decision," he said.

Keiley said no animals are turned away from the shelter, and the shelter has a good adoption rate.

"We do make euthanasia decisions but not without a lot of other options first," he said.

He said people surrendering their pets recognize they can't afford the animal and want to do the right thing by coming to the shelter.

Owners are often heartbroken at having to surrender their sick or injured pets, he said.

"It is a horrific decision to give up a pet," he said. "The message is people need to have a plan for their animals. Accidents do happen."

Pet insurance could be part of that plan, he said. "It's certainly worth the investment. You hope you never have to use it but it is there if you need it," he said.

"We have to put out money at first to get them adoptable, then we try to find them homes," he said. "We need people to adopt them just as much as we need people to help us with donations."

About the Angels for Animals fund

Angels for Animals was developed in 2003 in order to encourage the public to donate money for animals in need of medical care. Over the last three years, the shelter has addressed the medical concerns of about 100 animals using money from Angels for Animals.