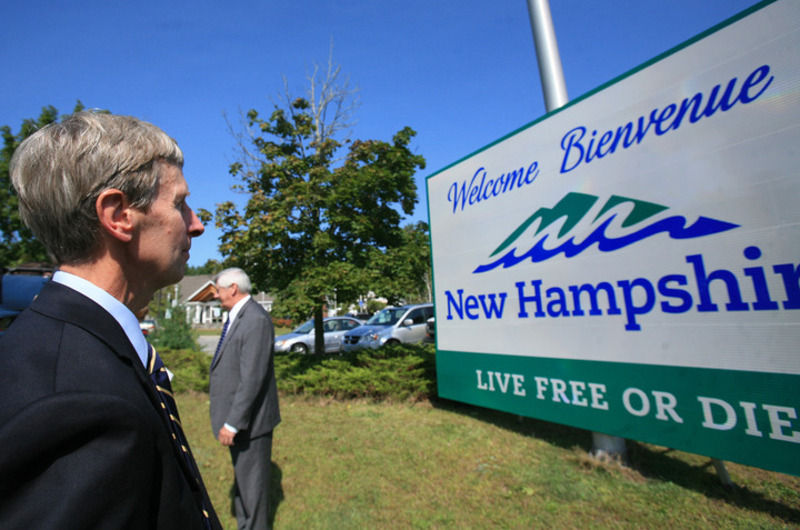 Gov. John Lynch looks at the new highway sign to be posted along Interstate 93 in Salem. 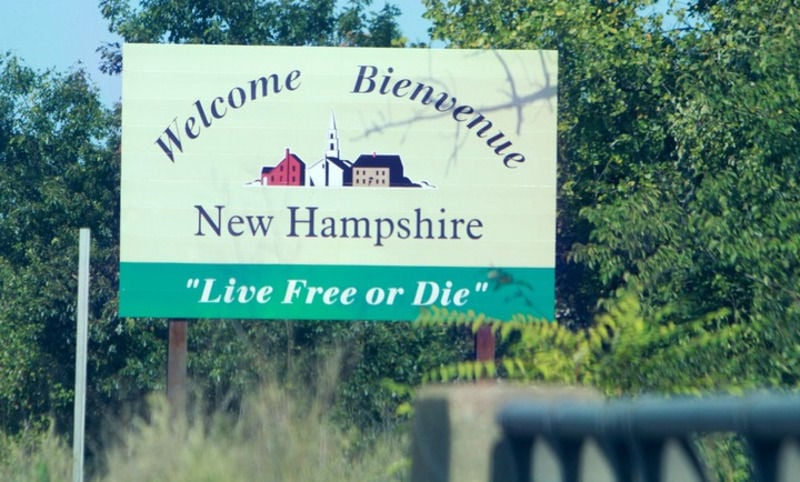 This is the highway sign on Interstate 93 in Salem that will be replaced. 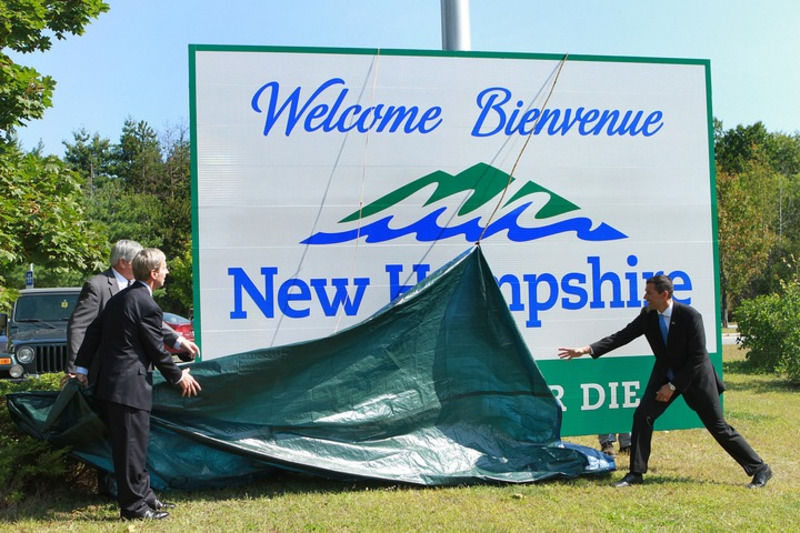 Gov. John Lynch looks at the new highway sign to be posted along Interstate 93 in Salem.

This is the highway sign on Interstate 93 in Salem that will be replaced.

SALEM — The message is the same, but the logo is updated.

State officials ushered fall in a little early yesterday by unveiling the new highway signs that will welcome visitors to New Hampshire.

Gov. John Lynch and more than a dozen top leaders and tourism officials gathered outside the state’s Welcome Center off Interstate 93 north.

As they stood before one of the 16-by-10-foot steel signs, covered with a green tarp, Lynch and others spoke of their goal of boosting tourism in the state.

State officials are making that welcome in English and in French, even though the closest entry point to any of the five welcome signs is nearly 70 miles distant.

The signs say “Welcome” and “Bienvenue” — and, of course, “Live Free or Die,” the state motto.

There probably aren’t many Canadians making the trek from Massachusetts to New Hampshire. But Amy Bassett, spokeswoman for the state Department of Resources and Economic Development, said the state wanted to have a standardized sign with its traditional message.

DOT spokesman William Boynton said “Bienvenue” continues to grace state signs. The greeting and “Live Free or Die” were inadvertently omitted from a new design years ago and that didn’t sit well, he said.

A public outcry, including requests from the state’s Franco-American population, led to both being reinstated, Boynton said.

The blue, green and white sign — bearing the state’s new

logo — is the first of five to be posted near the state’s borders. It was to be erected at 3 a.m. today along I-93 north when traffic along the busy highway would be light.

Lynch joked he wanted to have the ceremony on the interstate, but Bald thought the rest area was a more appropriate place.

For anyone interested in standing along I-93 in the dark at 3 a.m., “Dress casual and bring a wrench,” Bald said.

“It’s really nice we’re unveiling the sign because it’s a kickoff to our fall foliage,” said Bald, who retires Nov. 1. “We expect during the season we’ll have 7.9 million visitors. That brings in about $1 billion to the state’s economy.”

The four other large signs, each costing $1,600, will be erected this fall along Interstate 95 in Seabrook, the Everett Turnpike in Nashua, I-93 in Littleton and Interstate 89 in Lebanon. A similar 9-by-5-foot sign, costing $900, will be installed in Portsmouth.

No Salem officials attended the ceremony, but Bassett and Division of Travel and Tourism Development director weren’t sure if they were invited. If not, Bassett said the state had no intention of slighting town officials.

Selectmen’s Chairman Patrick Hargreaves said he wasn’t concerned about not being notified, but would have attended the ceremony if he had been invited.

Al Starus, 53, of Dorchester, Mass., stopped off at the Welcome Center while on his way to shop at The Mall at Rockingham Park. He said he liked the new sign.