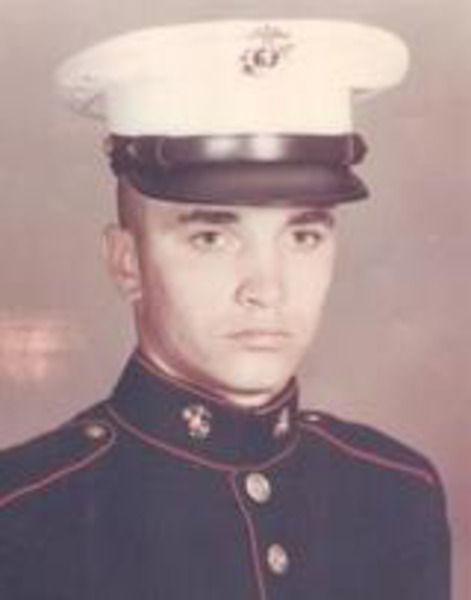 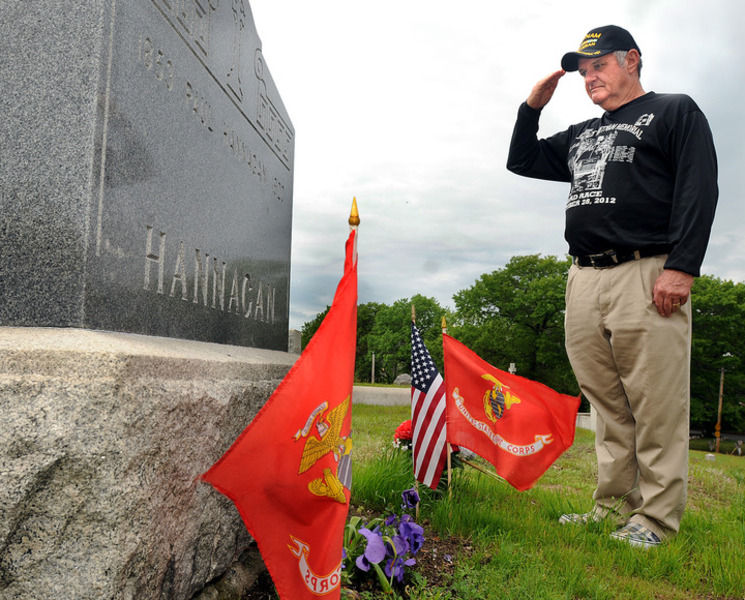 Vietnam Army veteran and retired director for Veteran Services for Methuen, Edward ''Hoppy'' Curran, salutes the gravesite of Lawrence Marine Cpl. Robert Daniel Corriveau. The persistence of Corriveau's sister led to solving a 40-year-old murder in Philadelphia. Most believed that Corriveau went AWOL from the psychiatric ward of a hospital. Corriveau is buried at the family plot, his remains moved there last fall after he was declared a murder victim instead of a being AWOL.

Vietnam Army veteran and retired director for Veteran Services for Methuen, Edward ''Hoppy'' Curran, salutes the gravesite of Lawrence Marine Cpl. Robert Daniel Corriveau. The persistence of Corriveau's sister led to solving a 40-year-old murder in Philadelphia. Most believed that Corriveau went AWOL from the psychiatric ward of a hospital. Corriveau is buried at the family plot, his remains moved there last fall after he was declared a murder victim instead of a being AWOL.

LAWRENCE — Marine Cpl. Robert Daniel Corriveau put his life on the line during the Vietnam War, getting wounded three times during combat.

But for the first Memorial Day since he was murdered more than four decades ago, the Lawrence native is being remembered on the nation’s most somber holiday as a hero – not a deserter.

For the first time, American and Marine flags decorate the family burial plot in St. Mary’s Cemetery, which still awaits placement of a military plaque with his name inscribed acknowledging his service to country.

The Lawrence Vietnam Memorial honored Cpl. Corriveau with a scholarship to Central Catholic graduate, Jacquelyn Ann Nassar at last Friday’s commencement. And in the fall, the group plans to have Corriveau’s name added to the list of local war heroes printed on the T-shirts for the 17th annual Lawrence Vietnam War Memorial 4-mile Road Race.

“We wanted to honor him in a small way and welcome him home,” said Edward “Hoppy” Curran, a Lawrence native and Vietnam Army veteran.

“I’m going to the cemetery to say a prayer for Bob, salute him and welcome him home. It’s unbelievable it’s taken this long for this poor guy to get the respect and honor he deserved. It’s horrible for a guy with three Purple Hearts to be treated this way,” he said. Curran, who founded the Lawrence Vietnam Memorial 21 years ago, is the retired Director for Veteran Services for the city of Methuen,

The honors are coming decades late for Corriveau, who was wrongly classified as a deserter after he vanished on Nov. 18, 1968, from the Philadelphia Naval Hospital where he was receiving psychiatric treatment for what officials described as a combat-related condition.

Hours later on that same day, a state trooper on patrol discovered the body of an unidentified man in a seated position along the Pennsylvania Turnpike, about 30 miles west of Philadelphia. An autopsy later determined the dead man had been stabbed once through the heart.

It wasn’t until late last year, with the help of DNA testing, that Pennsylvania State Police officially identified the remains of the dead man as Corriveau and opened up a cold case investigation into the unsolved murder.

At about the same, a relentless pursuit waged over two decades by Virginia Cleary of North Conway, N.H. to find out what happened to Corriveau, helped to finally clear her brother’s name. Now armed with a death certificate, she was able to have the Marines Corp remove the deserter classification. She obtained a court order from a Pennsylvania judge to have her brother’s remains exhumed last fall and brought back to Lawrence for a private funeral with full military honors.

“For 44 years, Cpl. Robert Daniel Corriveau, USMC, was reported as missing and was looked upon as being a deserter – a disgraceful title for one who fought for his country, was wounded three times, received three Purple Hearts, two Bronze Stars, the Gallantry Medal, Vietnam Service Award and other citations,” Cleary said in a telephone interview last week.

“He was an unsung hero, but it was to be a long time before others would know it. Bobby was killed on Nov. 18, 1968 – not in Vietnam – but Pennsylvania. He laid in a ‘John Doe’ grave for 44 years. He did not have anyone to decorate his grave, to place a flag on it or to salute him for his unselfish service to his country,” she said.

As the years passed, Cleary said she was “the only one” to believe that her brother wasn’t a deserter.

She said there can never be any chance of closure until his murder is solved.

“For me, when I brought him home, at least I had the peace of knowing his name is not disgraced anymore,” she said.

She also has satisfaction in knowing that future generations of students who graduate from Central Catholic High School in Lawrence, where Corriveau attended classes before enlisting in the Marines at 17, will learn about the long-forgotten Marine.

Students like Jacquelyn Ann Nassar, the recipient of this year’s Corriveau Scholarship, who wrote a 100-word essay on what a veteran means to her.

“Two of my uncles are Marine veterans who served their country, I cannot be more proud of their contributions to defending the safety and freedom of the United States of America,” Nassar wrote.

“A veteran is truly a selfless hero. They put their lives on the line of fire to save so many people that they do not even know. This idea I found to be very astounding. A veteran holds the utmost honor in my eyes,” she said.

Cleary said she would have loved to been there for the scholarship presentation and hopes to get an invitation next year. She said she was moved after hearing excerpts of the student’s essay.

On this 40th anniversary of the end of the Vietnam War, she wrote a special message for her brother to honor his memory:

“Yes, Bobby, indeed, it has been long overdue. Stand tall and proud and join the ranks of all the other veterans this Memorial Day. I am proud to say my brother was a Marine. Once a Marine, always a Marine. Semper Fi, Cpl. Robert Daniel Corriveau. We salute you.”