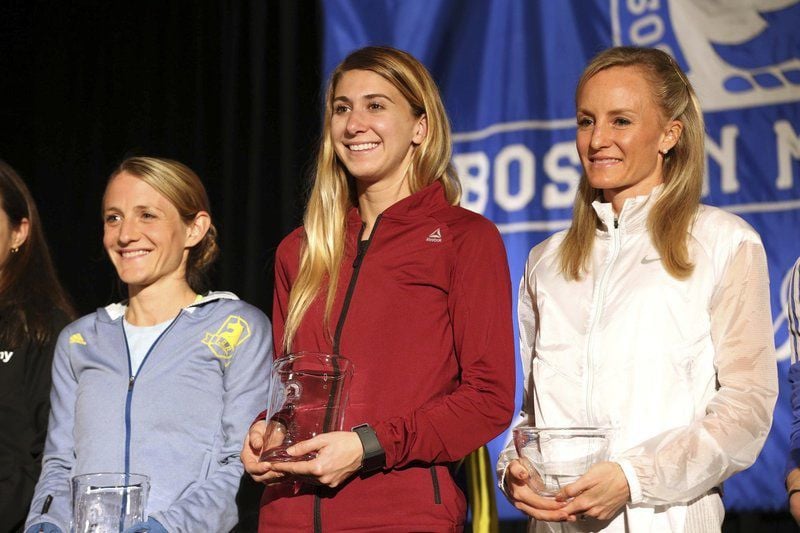 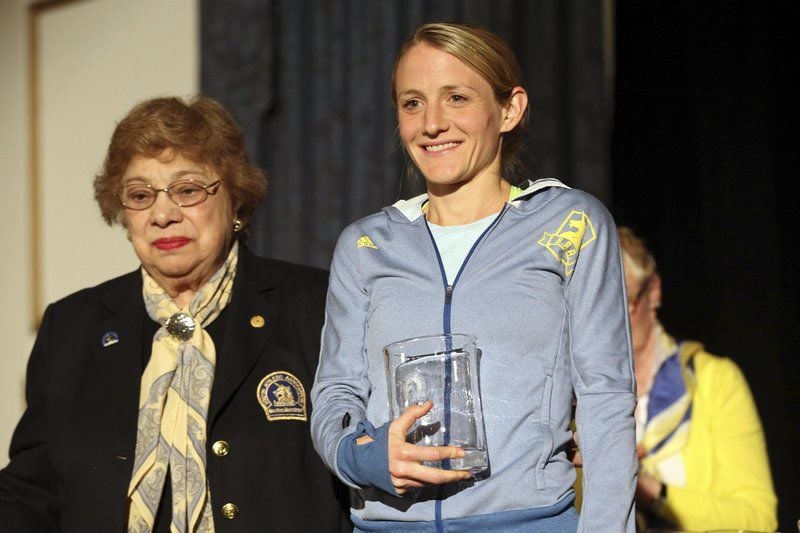 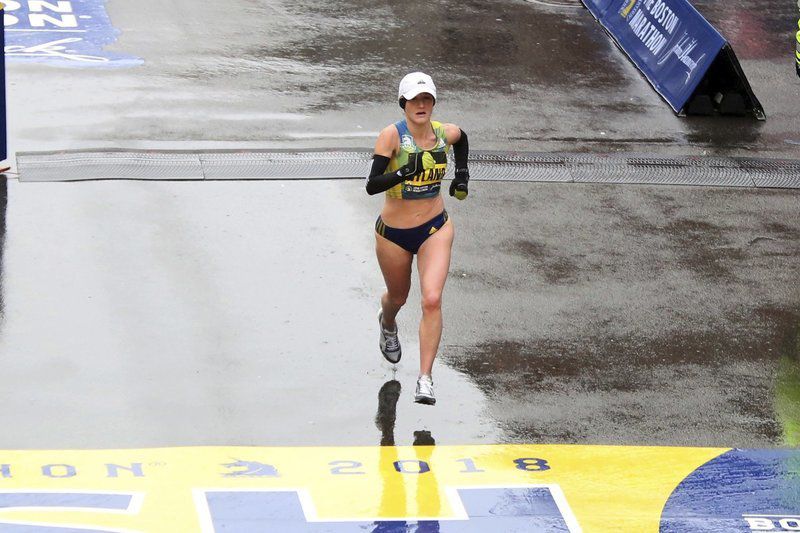 HADLEY GREEN/Staff photo Andover resident and Phillips Academy teacher Rachel Hyland crosses the finish line to come in fourth in the women's division at the 122nd Boston Marathon. She earned $25,000 for the effort.

HADLEY GREEN/Staff photo Andover resident and Phillips Academy teacher Rachel Hyland crosses the finish line to come in fourth in the women's division at the 122nd Boston Marathon. She earned $25,000 for the effort.

Rachel Hyland had special plans for this Boston Marathon.

The Phillips Andover Academy teacher the past eight years is moving to San Francisco with her husband in June.

She was expecting this particular marathon to be her best ever, somewhere around 2:39, as her marathon career enters its prime.

Then the early weather reports came out last week.

By Wednesday, meteorologists were 95 percent sure that Patriots Day would have a mix of rain, wind and chilly temperatures.

"By about Thursday I realized that (2:39) probably wasn't going to happen," said the 31-year-old.

On Friday, Hyland heard a TV interview with elite runner Desiree Linden, a top American from Michigan, talking about the weather.

"She said, 'Bring on the weather. I'm excited for it.' " said Hyland. "She pointed out that a lot of people are better when it's perfect conditions. She said that 'I'm OK with the bad weather. I can do anything in that weather.' I found that inspiring."

Hyland shocked not only the world running community, but herself, taking fourth place overall in the women's division with a time of 2:44:29 and taking home a prize purse of $25,000.

The 2018 field included five marathon champions, including the great Shalene Flanagan of Marblehead, who had won the New York City Marathon in October.

"The first thing I had going for me was I wasn't worried about time, because of weather," said Hyland, who was a cross-country star with her husband at Williams College.

"I didn't even look at my watch. I ran by feel," she said. "I know what 'marathon effort' feels like. I played that to my advantage, not being focused on time."

Her husband Sean had run the previous five Boston Marathons, hovering between 110th place and 150th in four of the races, with a PR of 2:35. But a foot injury the last month forced Mrs. Hyland to go it alone.

But Sean made it to two spots to cheer his wife on.

At about the 23-1/2-mile mark she had one of the greatest moments of her road racing career.

"It was surreal," recalled Hyland, a native of Lake Bluff, Ill. "She's incredible. I know of her. But I never talked to her."

Hyland picked off three more racers and was on the tail of the second- and third-place finishers. Sarah Sellers of the U.S. was 25 seconds ahead, coming in at 2:44:04, and Krista Duchene of Canada was nine seconds ahead, finishing at 2:44:20.

The top 10 finish earned Hyland special honors on the stage, including some elite company.

"I ended up shaking hands and meeting Shalene, which was incredible," Hyland said Monday night. "It still hasn't hit me."

This performance, in extreme weather conditions, could be a springboard for her aspiring marathon career, which is now six years old and counting.

"I am going to get some down time," said Hyland, who teaches Spanish at Phillips. "I'm taking a group of Phillips Andover kids to Argentina in July, which I'm really excited about. After that, I will think about training again."

With her moving to the West Coast, Hyland is shooting for the the California International Marathon (CIM) in Sacramento on Dec. 2.

"I definitely will be back to Boston. Maybe next year," said Hyland. "This is the best (race) in the world. It's big for both my husband and myself. This will always be special."

She ran in oppressive heat in 2012

Rachel Hyland can really pick her Boston Marathons. Yesterday, with brutal winds, rain and cold temperatures, was her second-ever Boston.

It was 87 degrees, the hottest Boston Marathon in three decades.

"It was very, very hot that day." recalled Hyland. "But it was my first Boston and I was excited."