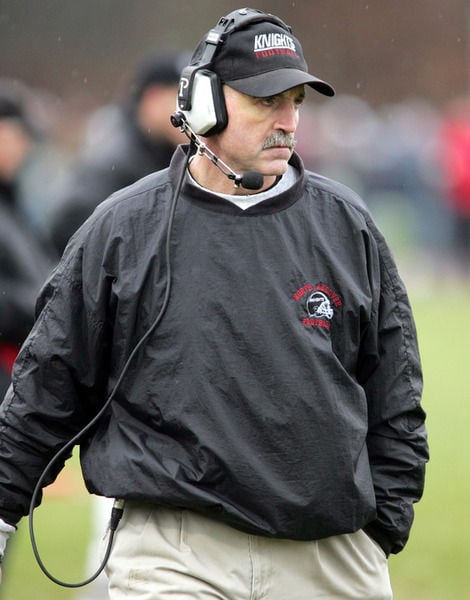 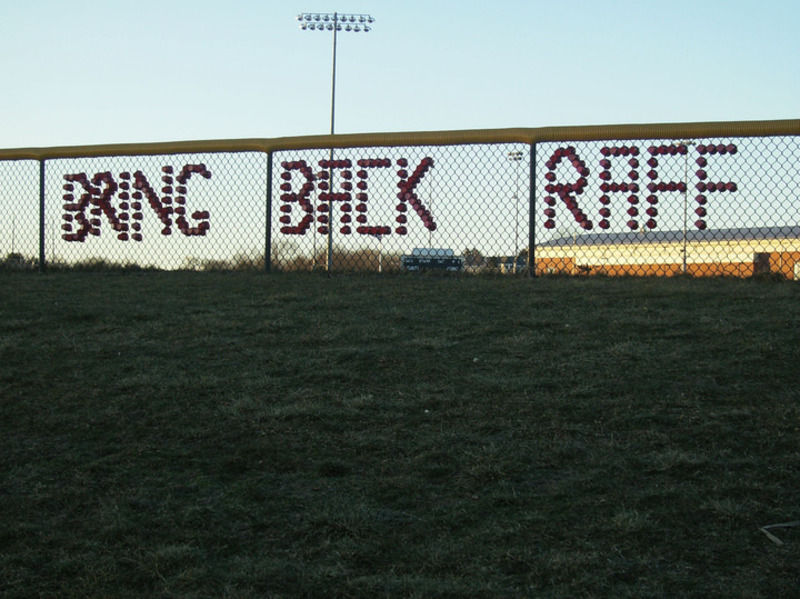 This was up a day after Coach John Rafferty was fired and has since been removed.

This was up a day after Coach John Rafferty was fired and has since been removed.

NORTH ANDOVER — Coaches are hired and fired (or not rehired) all of the time at our local high schools.

But the decision last week not to rehire North Andover High football coach John Rafferty after 12 years has touched a nerve among many residents.

Support movements started immediately after the decision was revealed, and a week later they show no signs of lightening up.

Signs — “Bring Back Raff” — have popped up throughout the town.

A Facebook page, “Support Coach Rafferty,” was started the same day he was fired and has received more than 600 “Likes,” as well as numerous postings on the page, questioning the move.

There are also petitions, containing about 700 signatures, supporting Rafferty at several locations in town, including Stachey’s Pizza, the Mobil station on Mass. Ave., and the VFW on Route 125.

One of the common elements in the vast number of complaints is the fact that North Andover school system won’t publicly divulge any of its reasons for firing Rafferty, but it won’t meet with the public either.

“It’s a vicious circle,” said Terry Holland, a former North Andover Booster Club president and owner of Stachey’s, which has a “Bring Back Raff” sign in front of his store as well as a petition inside.

Holland and other requested to get on the agenda for the School Committee meetings this past week and next week. But they have been turned away.

Hutchinson said while he understands the frustration of so many people like Holland, personnel matters are not discussed publicly in North Andover Public Schools.

“If a meeting is set up, what do people expect us to say,” said Hutchinson. “We don’t discuss personnel decisions in public.”

Former player, Patrick Turner, who graduated in 2003 and was a junior in Rafferty’s first year, called his former coach the best he ever had.

“I can think of countless times that he was there for me as both a coach and a mentor, while I was a student and well after I graduated,” said Turner in an e-mail to the Eagle-Tribune. “Playing for Coach Rafferty meant something.”

Dr. Hutchinson said he is well aware of the movement and support like Turner’s for the former football coach.

“When I hear all the great things and testimonies about Coach Raff and his staff, that’s a wonderful thing to hear,” said Hutchinson. “That means a lot to us that it was a great experience for many of his former players and parents. But you can’t connect that with discussing the issue with people.”

Hutchinson said that Longley and Scuzzarella met with the captains and their parents, as well as all the players (in small groups) who requested a meeting.

One concern about the “new” football coach is that many people feel that the application process will be a farce and the new coach has “unofficially” been hired.

“That’s not true,” said Hutchinson. “I think people saw that we opened the position internally, but we’ve done it externally as well. We will have a process in place to vet the candidates. There will be community and parent representation. In the end, the athletic director and principal will do final interviews, and the high school principal will make the final decision.”

Coach Raff: I'm not coming back

John Rafferty says he is humbled by the Facebook page in his honor as well as the petition drive, not to mention the dozens of letters he has received from his players, former players and parents.

"Humbling is a good word," said Rafferty, who was fired last week after 12 years as head football coach. "I'm overwhelmed. It shows a lot, about what people thought of the program."

But the 59-year-old Rafferty says he wants no part of the petition drive to bring him back as coach.

"I'm not about being involved in controversy ...  none whatsoever," said Rafferty. "I appreciate the support. But I'm done (there). They made their decision."

A week after the decision, Rafferty admits he is still stunned after he was told he wouldn't be returning for a 13th season after going 81-49.

"I feel the same I did a week ago," says Rafferty. "Myself and the staff invested a lot of our lives in that program. I'm glad we did. I have no regrets. None.

"I am sincerely thankful for the tremendous families, kids and townspeople ...  I know this sounds like a cliche, but being head coach in North Andover was a great experience. That will never change."

Asked if he has checked out the Facebook page (Support Coach Rafferty) in his honor, Rafferty started laughing. "I can barely get on (my computer)," he said.

"I wouldn't even know how to get on it, not media savvy, I'm handicapped that way."