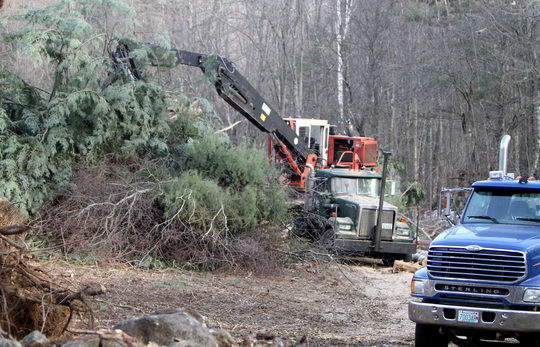 HAMPSTEAD — Some residents were upset when they heard chain saws and saw trees cut down on protected conservation land this week. A few of them called Town Hall to express their concern.

But there's no reason for alarm, according to town officials.

The Hampstead Conservation Commission is working with a licensed forester to harvest and thin trees on the West Road conservation property for the good of the forest.

Conservation Commission Chairman Timothy Lovell said he understands why residents reacted so negatively to the town cutting down trees on portions of the 250-acre property.

"Usually, people don't want anything to change," he said. "They love the heavy growth of trees, but the reality is that's killing the forest."

He said the forest is too dense and hardly any sunlight reaches the forest floor, stunting the growth of the trees.

By weeding out some of the older trees, he said, the town can plant new trees that will have a chance to flourish.

"We're going to plant in excess of 300 crab apple trees that will provide food for deer and birds," Lovell said.

"By opening up the fields, you'll have birds that need open space to live in come back to the area, like birds of prey," he said. "We'll let the grass grow out for rabbits and birds like pheasants that need grassland."

He said the thinning will only take place in portions of the 250 acres.

David Treat, vice chairman of the commission, said they knew residents would be concerned.

"We did our best ahead of time to publicize this during our meetings and selectmen meetings, but expected people would react," Treat said.

"The conservation area is heavily used for recreation year-round and a timber harvest brings in a lot of machinery and makes a big mess. So, people who are used to nice, pristine woods are seeing tree cutting and wondering what's going on."

Treat said there will be noise and disturbance caused by the project.

"The saw that does the cutting makes a lot of noise and the trucks make a lot of engine noise," he said.

Because of this issue, Lovell said the town specifically reached out to the family whose home abuts the property.

"Initially, they were very angry," Lovell said. "But we've spent a lot of time with the family, and walked them on the property and showed them how the whole thing works. A professional forester spent another 45 minutes with them and now they understand. Once they saw why you cut down trees to help the forest, they were onboard."

But other residents are still upset. The area is used in the winter for snowshoeing, skiing and more, so seven people have gone to Town Hall to complain, and many more have e-mailed and called.

Treat assured residents the bulk of the work should be done in the next two to three weeks, with more cleanup to be finished in the spring once the snow melts.

"In the spring, we'll get a tractor in and clean up the debris, and plant grass seed and wildflower seed in the fields," he said.

Treat said most of the trees being cut are low quality timber that will be chipped and taken to an energy plant in Portsmouth.

"All the revenue we get from the wood will be reinvested in the town forests to further maintain them," Treat said.