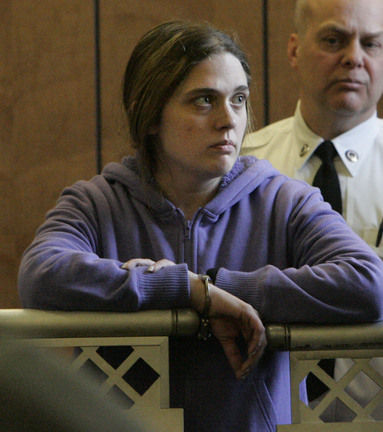 Joanne Belmer of Haverhill is arraigned in Haverhill District Court yesterday on charges of possession of heroin with intent to distribute. 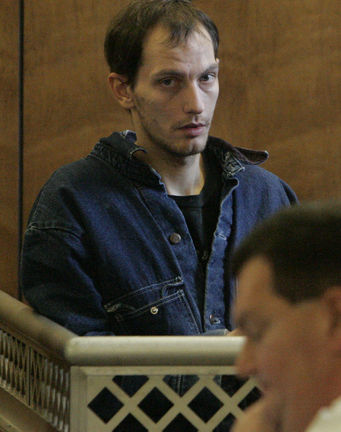 Anthony St. Onge of Haverhill is arraigned in Haverhill District Court yesterday on charges of possession of heroin with intent to distribute. 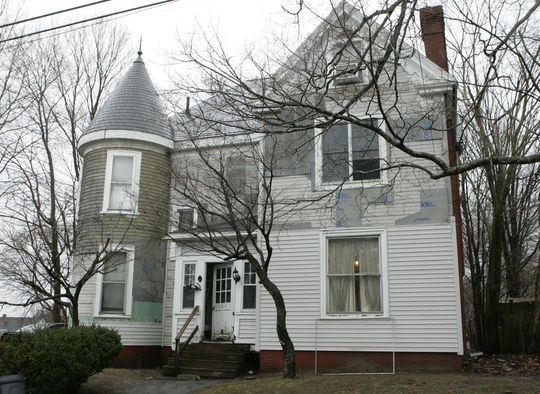 This house at 142 Cedar St. was raided by police on Friday leading to charges against residents Joanne Belmer, Anthony St. Onge and three others.

Joanne Belmer of Haverhill is arraigned in Haverhill District Court yesterday on charges of possession of heroin with intent to distribute.

Anthony St. Onge of Haverhill is arraigned in Haverhill District Court yesterday on charges of possession of heroin with intent to distribute.

This house at 142 Cedar St. was raided by police on Friday leading to charges against residents Joanne Belmer, Anthony St. Onge and three others.

HAVERHILL — The lawyer for the couple accused of running a heroin "shooting gallery" out of their Cedar Street apartment told a judge that his clients are drug-addicted users, not drug dealers, as police and prosecutors allege.

Police arrested Joanne Belmer, 30, Anthony St. Onge, 28, and three others after a raid Friday night of their apartment on the first floor of 142 Cedar St. in the city's Acre section.

Police also found two young children in the apartment amid cat feces, urine and other filth. One of the children, Belmer's and St. Onge's 4-year-old son, is now in the custody of the state Department of Children and Families, prosecutors said during an arraignment yesterday in Haverhill District Court.

"The place was dirty, filthy and just disgusting," police spokesman Sgt. John Arahovites said of the apartment. "It should be condemned. Children living there don't deserve that. Animals have better living conditions."

Belmer and St. Onge are charged with possession of heroin with intent to distribute, knowingly being present where heroin is kept, reckless endangerment of a child, and a drug violation in a school zone.

Also arrested in Friday's raid and charged with possession of heroin were David Plourde, 26, of 30 Lenamay Way, Salisbury; Eric D. Balsamo, 32, of 50 Rossi St., Methuen; and Tania M. Cormier, 36, of 96 Winter St., Haverhill. Plourde also is charged with reckless endangerment of a child — his 21-month-old daughter was with him in the apartment.

Belmer and St. Onge have been in custody since their arrests. They were shackled for their court appearance — she wore a purple hooded sweatshirt; he wore a denim jacket. The other three defendants posted bail and were released over the weekend, although Balsamo was taken back into custody at yesterday's hearing on a drug case from another court.

Dowling released Plourde and Cormier on a promise to appear in court April 22, when the case will continue against all five defendants. Balsamo was to be held last night and returned to Newburyport District Court today to resolve an open case there.

Because Belmer and St. Onge have a history of drug dealing convictions, Dole said prosecutors might file more serious charges against the pair that could send their cases to Superior Court, where longer jail sentences are possible.

Attorney David Stuehr, who was appointed by Dowling to represent Belmer and St. Onge at their arraignments, characterized the couple as drug users, not drug dealers.

"This is people in a run-down building using heroin," he said. "It's personal use. That's why police found syringes and spoons and scissors that are used to open packages, not close them."

Stuehr said Belmer was "a productive citizen for a period of time until she fell into drug addiction." He said she has been out of work about six months, having previously worked at a local restaurant.

"She wants to get into a recovery program and focus on her family," Stuehr said. "She needs medical help."

Stuehr said St. Onge has lived in Haverhill all his life. He said his client cooperated with police when they raided his home.

"He didn't try to run or hide when police entered the home," Stuehr said.

Stuehr also claimed St. Onge didn't know the home was being used as a place to do or sell drugs because until recently he had been living in a home for drug addicts in Amesbury. St. Onge also recently spent time at the Worcester House of Correction and the Middleton jail, Stuehr said.

Police had been watching the apartment for the past few months after receiving complaints from multiple sources, including neighbors, calls to the police tip line, and by e-mail.

"They were selling heroin morning, noon and night," Arahovites said. "They would pool their money for four or five customers at a time, go to Lawrence to buy the heroin, then bring it back, and it just kept going."

Arahovites said the apartment was "not fit for human habitation." He said it was littered with cat feces and urine, there were bugs and standing water in the bathroom, along with trash, garbage and a strong stench of urine throughout the living areas. A litter of kittens were present and neglected, and there was trash in the cellar, in the yard, on the back porch and in a hallway.