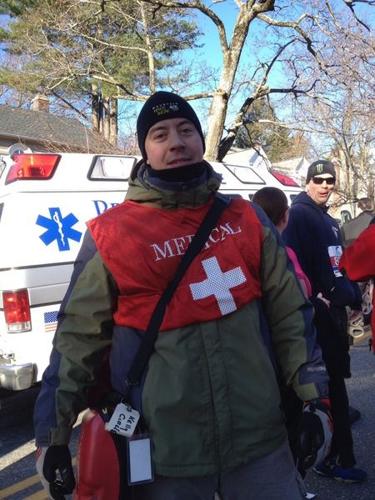 Dr. Lawrence Bourdeau helped save the life of Alan Dewhirst, 52, of North Andover, near the finish line of the Feaster Five Road Race on Thanksgiving morning in Andover. 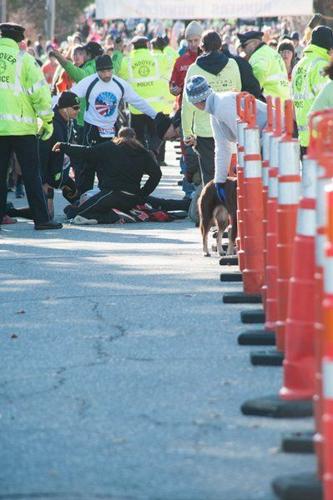 Medical personnel work on Alan Dewhirst after he suffered a heart attack near the end of the Feaster Five road race on Thanksgiving morning in Andover.

Dr. Lawrence Bourdeau helped save the life of Alan Dewhirst, 52, of North Andover, near the finish line of the Feaster Five Road Race on Thanksgiving morning in Andover.

Medical personnel work on Alan Dewhirst after he suffered a heart attack near the end of the Feaster Five road race on Thanksgiving morning in Andover.

Alan Dewhirst had a lot to be thankful for on this particular Thanksgiving Day.

On this chilly morning he was among nearly 10,000 pumped-up people running the Feaster Five Road Race in Andover. He ran with his daughter Paige, a student at the University of West Virginia.

“I was really excited,” said the 52-year-old North Andover resident. “It was the third time I had run the Feaster Five. I was with my daughter, who was home from college (University of West Virginia). I just remember being so happy.”

With about 150 yards to go in the 5K race, Dewhirst turned right onto York Street, a pain-in-the-neck hill near the end the course.

“I really wanted to give it my all and finish strong,” said Dewhirst. “I started charging up the hill. I was about three-quarters of the way up when I started feeling light-headed, like I was going to pass out.”

That’s the last thing Dewhirst remembered of his run. He collapsed on the street. He had suffered a heart attack.

About 100 yards away, Dr. Lawrence “Larry” Bourdeau, who works many races each year, was around the medical tent talking to an Andover police officer.

“His radio said somebody went down just before the finish line,” said Bourdeau, owner of Off-Season Sports and Physical Therapy in North Andover. “I just took off and started running. I could see people around one person who was down.”

Within a minute, Bourdeau got to Dewhirst, who was being given CPR by Paul Weinburgh, a firefighter from Haverhill, who was running the race, and a woman named Rebecca, who also was running.

Despite CPR efforts, Dewhirst didn’t have a pulse. That’s when Bourdeau used the Automated Electronic Defibrillator he always keeps strapped over his shoulder when working a race.

“This was the real deal,” said Bourdeau. “I remember getting (the AED) open as fast as I could, applied pads (to his chest), then ‘zapped’ him. He slowly came around. It was about a minute to a minute and a half after he had gone down before he was revived. It was amazing.”

The EMTs arrived about two minutes after Dewhirst was revived and whisked him off to Lawrence General Hospital.

Dewhirst said he has since learned that the heart attack occurred due to an artery that was 99 percent blocked and was later opened up with the insertion of a stent.

He’s had five days now to count his blessings and give thanks for the team that saved him.

“Three weeks ago, I was hunting with a friend, and we got a 200-pound buck,” said Dewhirst. “And we dragged it about a mile. What if I got the heart attack then? I’d be dead.

“What if it happened on Elm Street, where there wasn’t a medical tent or someone with an AED?” asked Dewhirst. “I’d probably be dead. The fact that I had the heart attack where I did, near the finish line, where there was medical personnel is incredible. What about the fact that two people who first helped me, both knew CPR? I am so thankful. I really am.”

Bourdeau said problems usually come in the last leg of road races, which is why there were spotters on York Street looking for runners who were struggling.

“In fact, it was a spotter, Tom Papile, who first saw Mr. Dewhirst go down, and he got on the radio immediately,” said Bourdeau. “The thing is you have meetings throughout the year, in preparation, then you have meeting the last month, then the day of the race, talking about what do in situations like this ... Then it happens. Most of the time, this race goes off without a hitch. But this one time, we were ready, and the story ends well.”

Dewhirst, who at 5-10 and 200 pounds, figured he was in decent shape due to his jogging. But he does recall some issues over the last six months in which he was a little more tired than normal or his heat was “racing” and he needing to stop and breathe.

“I’ve had high blood pressure, and I have to get my cholesterol down a little bit, but I’ve always felt like I was pretty healthy,” said Dewhirst. “It’s only been a few days, but I already feel better. I’m just trying to rest a little bit before I get back to work, maybe next week.”

Feaster Five race director Dave McGillivray was in awe of what transpired before, during and after the incident with Dewhirst.

“He had no pulse, no heartbeat,” said McGillivray. “Our medical team, along with a few runners in the area, responded right away and performed CPR and with an AED and brought Alan back to life. He is lucky he went down in a road race versus in his back yard or walking up his stairs. It’s proof again that running in a road race can actually save your life.”

As for Thanksgiving, Dewhirst’s personal calendar might as well be Thanksgiving Day for 365 days every year from now on.

“I’m so thankful for the first responders and what they did for me,” said Dewhirst. “I’m a very lucky guy.”

Dewhirst, Bourdeau to speak tonight at Sal's The Merrimack Valley Striders monthly meeting will be a little extra special when the running club does its wrapup of the 2013 Feaster Five Road Race. Heart attack victim Alan Dewhirst and Dr. Lawrence "Larry" Bourdeau, who helped revive him, will be on hand tonight at Sal's Restaurant in Lawrence to talk about their experiences. Both men reside in North Andover and have been at recent Feaster Five races in Andover -- Dewhirst running and Bourdeau working the medical tent. There will also be EMTs who were on hand and Lawrence General Hospital personnel who aided Dewhirst's amazing recovery. The monthly meeting begins at 7 p.m. and is open to the public.