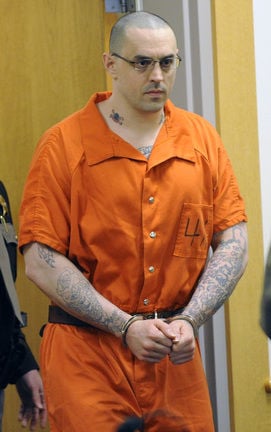 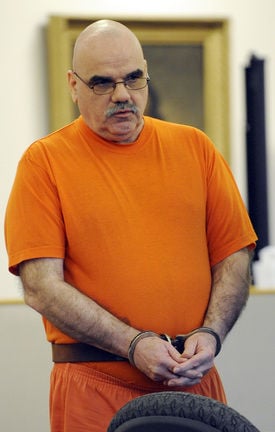 BRENTWOOD — Two men were sentenced to decades in prison yesterday for their involvement in the 2005 murder-for-hire of Derry resident Jack Reid.

Michael Benton, 33, was sentenced to at least 33 years in state prison. He was convicted of second-degree murder and conspiracy to commit capital murder.

Joseph Vrooman, 53, will serve 17 1/2 to 30 years in prison. He was convicted of conspiracy to commit capital murder and hindering apprehension.

Both men were given plea agreements in exchange for testifying against their coconspirators. Multimillionaire John "Jay" Brooks is serving a life sentence for orchestrating the plot that included Benton, Vrooman, his son Jesse Brooks and Robin Knight.

Later this month, Jesse Brooks will be the final man to be sentenced in connection with Reid's murder.

Two of Reid's daughters and a son addressed Benton before he was sentenced yesterday in Rockingham County Superior Court.

Jaye Klos of New York asked Judge Robert Lynn not to have any mercy on Benton in his sentencing.

"There was no mercy for my father when he was struck with a 3-pound sledgehammer," she said.

Megan Reid said she had been waiting for five years for Benton to be sentenced. He deserved to suffer like her father had when he was tricked into going into a barn, where he was beaten to death, she said.

"That was the worst part, knowing he was alone, and all of you stood around and watched him suffer," she said.

Both Benton and Vrooman took responsibility for their roles in the murder and apologized to Reid's relatives, who sat in the first row of the courtroom.

Klos asked Vrooman whether the $10,000 he was paid to help kill her father was worth leaving their family without a father.

"Jack Reid had five children that loved him and many others that miss him," she said. "Was that worth the price that you got paid?"

When Vrooman addressed the family, he responded to Klos' question.

Lynn, who presided over both hearings, said it was difficult to understand how Vrooman, who had a military career and no criminal record, agreed to the murder plot so casually.

"He accepted his involvement in this the same as if someone who asked me, 'Hey, let's go to lunch at Pizza Hut today,'" Lynn said.

The elder Brooks began plotting to kill Reid in 2003, when he became convinced Reid had stolen moving trucks filled with Brooks's family belongings.

Benton, a childhood friend of Jesse Brooks, was hired along with Vrooman and Knight to carry out the murder.