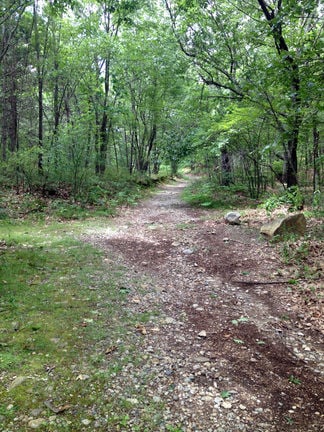 The main trail leading into Den Rock Park is an easy incline but a little rocky. The trails were built by the Works Progress Administration during the Great Depression. 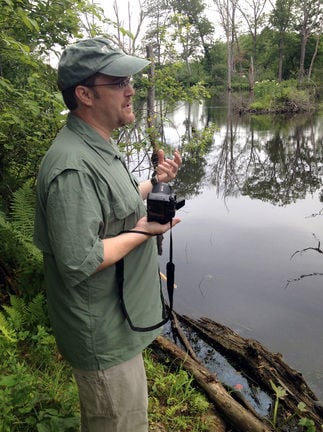 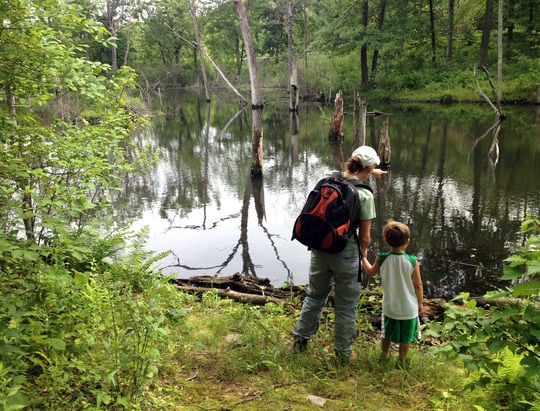 Rebecca Veilleux and her 4-year-old son Jax stand at the edge of a beaver pond in Den Rock Park.

The main trail leading into Den Rock Park is an easy incline but a little rocky. The trails were built by the Works Progress Administration during the Great Depression.

Rebecca Veilleux and her 4-year-old son Jax stand at the edge of a beaver pond in Den Rock Park.

Located off Route 114 and bordered by Lawrence, North Andover and Andover, the park is made up of just 120 acres of land, but contains a lifetime's worth of outdoor experiences.

"I've been coming here for 25 years, and every time I return, I see something I've never seen before," Tennis Lily, chairman of the Lawrence Conservation Commission, said during a mid-morning walk Wednesday on a short loop of the park's several miles of winding trails.

On this particular stroll, we encountered a half-dozen or so bird species, heard bull frogs croaking to one other, watched two groups of young rock climbers scramble over the granite spine of the preserve and found a burned-out area of the park that may have been the result of a lightning strike.

That's what caught Lilly's eye this time around.

"I was here five weeks ago and I didn't notice this," he said, as he studied the blackened ground and charred tree branches that littered about a half-acre of the forest floor.

It is what keeps him coming back after all these years; there's always something new around the next corner.

"It wasn't until a year ago that I saw my first deer here," he said. "I followed a family of them for three hours, taking pictures. This is an incredibly diverse habitat. Right in the middle of an urban setting, you can see deer, coyote, fox, river otter, possum and dozens of different kinds of bird species, along with endangered plants and animals you can't find outside the park."

According to a write-up in the Andovers Trail Guide, the land that makes up the park was purchased by the city in 1877 originally for use as a cemetery. It was changed into a city park in 1896, and was improved in the 1930s by the Civilian Conservation Corps and the Works Progress Administration, whose workers built trails, two amphitheaters, and a boardwalk, among other improvements.

Over the years, the park has been used as a source of stone for the construction of nearby Interstate 495, as a dumping area for city composting material, and was even eyed for development as the site of a mall.

It was this last threat that galvanized Lilly to action. He and others in the city fended off the mall developers, protecting the park for future generations.

As we left the entrance just off Route 114, marked by a small parking area and a large sign with maps and information about the park, we were joined by Lawrence High School biology teacher Rebecca Veilleux and her 4-year-old son, Jax. As we walked up the wide, rocky trail, Lilly pointed off to the left, at the first of three beaver ponds that border the eastern edge of the preserve.

Since beaver trapping was banned in the early 1990s in Massachusetts, he said, the park has undergone a dramatic transformation. What was once a creek bed bordered by thick woodlands is now a series of three, consecutively larger ponds, starting with the smallest at the entrance along Route 114 and working around to the back of park, with the largest along the Andover border.

Once they were created by beavers, the ponds have become magnets for birds, fish, frogs, turtles and, of course, at least three families of beavers.

As we stopped at the second pond, a pair of kingfisher birds swooped down on some unseen prey in the water. Their loud calls echoed as they perched on the bare branches of dead trees and peered into the murky pool below.

A bullfrog chimed in, and circular ripples in the middle of the pond indicated fish, or possibly turtles, were rising to the surface.

"Water attracts all kinds of animals," said Lilly, as he and Veilleux snapped pictures.

A short while later, standing at the largest beaver pond at the back of the park, Lilly remarked that what was now an enormous wetland covered in white lilly-pads was once a dense forest bisected by trails and streams. But a beaver dam changed all that, and now it is home to a blinding array of wildlife.

"There's a green heron," Lilly announced, pointing at an elegant-looking bird in the distance, obscured by the whitened trunks of trees, pock-marked by tree-dwelling birds' nests. "This was once all a dense oak and hickory forest, as recently as 1996 or 1997," he said, snapping a close-up shot of the heron.

The occasional tree swallow and chimney swift darted across the sky, gobbling up flying insects — hopefully mosquitos. In the distance, a car drove by on Stirling Street, but otherwise we could have been in the middle of the White Mountains National Forest.

As we hiked up from the last beaver pond on the Red Tail Hawk/Great Blue Heron trail, we climbed to the top of the 'Den Rock,' a granite outcropping that is popular with rock climbers. On Wednesday, groups from Boston and Brooks Academy were there, ropes affixed to anchors at the top of the cliffs, climbers dangling on the rock below.

In addition to rock climbers, one of the more consistent user groups of the park are local students, including those taught by Villeux. She said she brings in kids from the nearby high school about three or four times a year.

Green Teams from Groundwork Lawrence have helped over the years with trail maintenance and construction of viewing platforms and boardwalks. Boy Scouts have done projects linking the park with other open spaces in neighboring Andover.

Students learn about such diverse subjects as geology — how glaciers carved the granite spine of the park over 12,000 years ago — biology, urban ecology, evolution and land preservation, among others.

Last year, students from Villeux's classes helped to identify and classify three, new vernal ponds in a marshy area near the back of the park. They are now protected areas and are home to threatened species including fairy shrimp and clam shrimp.

Editor's Note: Part of a weekly series of articles on easy and short walks and hikes in the Merrimack Valley area.

How to get there

Where: Den Rock Park is located off Route 114, opposite the North Andover Plaza.

Parking: There are a dozen or so spaces in the lot off 114; parking is also available on Stirling Street in Andover.

Guide maps: Available at the entrance or online at andovertrails.org or groundworklawrence.org.

Hiking difficulty: Easy, with one moderately steep incline to the top of Den Rock.

Pleasant Valley - Maryann Towers, 84, of Pleasant Valley, NY passed away on Monday, June 21, 2021 at Lutheran Care Center. Born in Lawrence. on April 23, 1937, she was the daughter of the late John and Katherine Petrow Koralishn. She was a graduate of Lawrence High School, Class of 1954, Mt.…