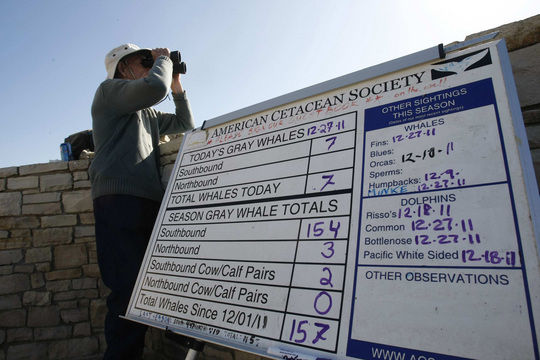 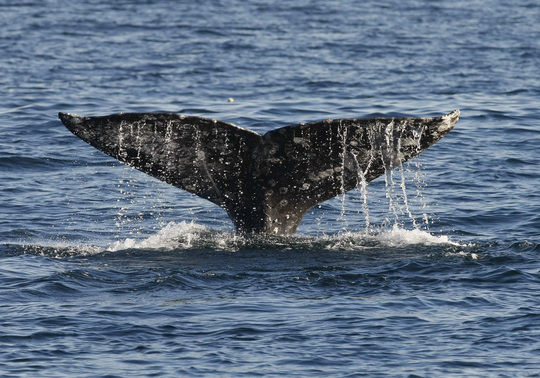 A gray whate reveals its fluke while diving off the Southern California coast near Palos Verdes. The annual migration of whales has begun earlier than every before, baffling experts and delighting tourists.

A gray whate reveals its fluke while diving off the Southern California coast near Palos Verdes. The annual migration of whales has begun earlier than every before, baffling experts and delighting tourists.

LOS ANGELES — Gray whales cruise through Southern California waters every winter, but this month the migratory giants have shown up so early and in such numbers that they are astounding many longtime observers.

Whale spotters stationed at Point Vicente in Rancho Palos Verdes have logged a record 163 sightings so far this December, more than they have seen at this point in 28 years.

Although the gray whale-watching season doesn't typically start until the end of December, the unprecedented number of early arrivals is delighting tourists, boaters and divers as the animals travel south along the coast to Mexico.

Volunteers for the American Cetacean Society/Los Angeles Chapter Gray Whale Census and Behavior Project work from sunup to sundown between Dec. 1 and May 15, using binoculars and high-powered spotting scopes to find whales and log their numbers from an overlook at the Point Vicente Interpretive Center.

"I've seen some pretty good years but never anything like this," said Joyce Daniels, a volunteer who heads the whale census from noon to dusk. On Monday, when there were more than two dozen sightings,

"We had whales everywhere. So many I was having trouble figuring out which whale was which," she said. "It's a real adrenaline rush to have so many whales."

After spotting them by their spouts, the eagle-eyed observers determine whether they are indeed gray whales by their mottled coloring, the shape of their flukes or the gentle notches in their backs. For each confirmed sighting, they note the whale's location, what direction it was swimming and add it to a running tally on a dry erase board.

Visitors are offered binoculars to scan for the creatures themselves.

By this point in December last year, the observers had spotted 26 gray whales. The previous record was 133, spotted in 1996.

It's something of mystery why so many gray whales are passing through Southern California this early in the season.

But it could have to do with climate, food supplies or other conditions far away in Arctic waters, where the huge mammals begin their annual journey to the shallow lagoons and bays of Baja California to give birth. It's also possible that more are being spotted because they are venturing nearer to shore.

More than 20,000 gray whales migrate each year from the Arctic to Baja California and back again in the spring. Their population, once depleted by commercial whaling, successfully rebounded and was taken off the endangered species list in 1994.

The influx of gray whales has sightseeing vessels off to a busy start. Already, divers have captured dramatic underwater video within an arm's reach of a juvenile gray whale in Laguna Beach.

On an excursion Tuesday out of San Pedro's 22nd Street Landing — the first of the year for the Cabrillo Marine Aquarium's Whalewatch program — a small boatload of whale seekers crowded along the bow of the ship, marveling as a gray whale spouted and surfaced over and over again a few miles from the Port of Los Angeles.

Gray whales, which can grow up to 50 feet long, arrive so predictably each winter that decades ago, even as other species struggled, they became a reliable draw for sightseers, said Bernardo Alps, a volunteer naturalist for the Cabrillo Whalewatch program.

"They're really the species that started whale watching here in Southern California in the 1950s," he said. "The idea of watching them instead of hunting them."

Though it may take months to learn if the gray whales' strong showing this month is part of a larger, seasonal uptick — sightings typically peak by the end of January — their admirers are hoping it means the animals are healthy, well-fed and reproducing.

"It's really incredible. It may very well be the whales are coming earlier or coming in closer," said Alisa Schulman-Janiger, director and coordinator of the whale census.

"To me, it's a very good sign that things are going very well with them."