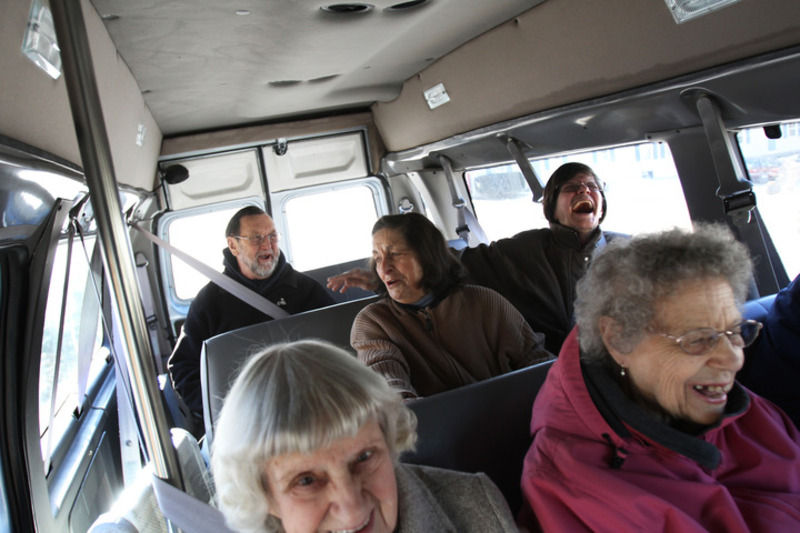 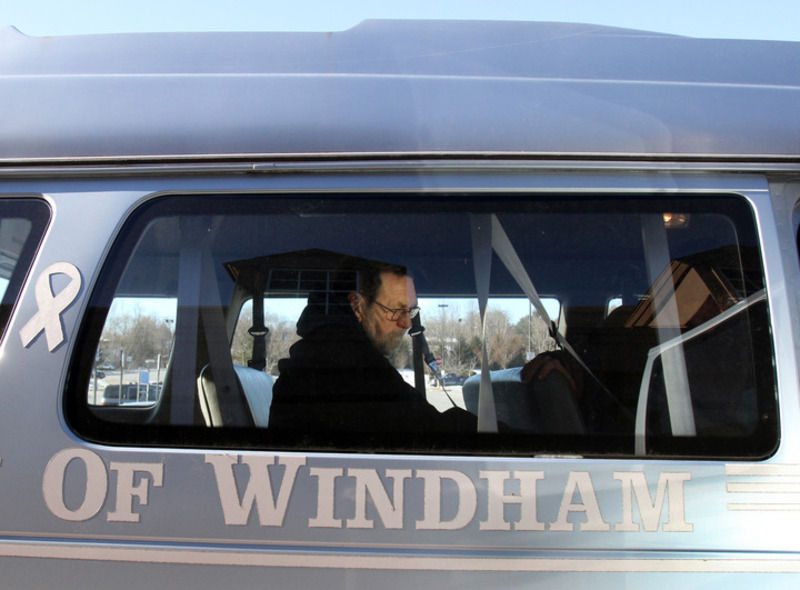 Windham resident John Leppala sits in the back of a town van outside Walmart in Salem. The town van is free for the elderly or disabled to use to run errands. 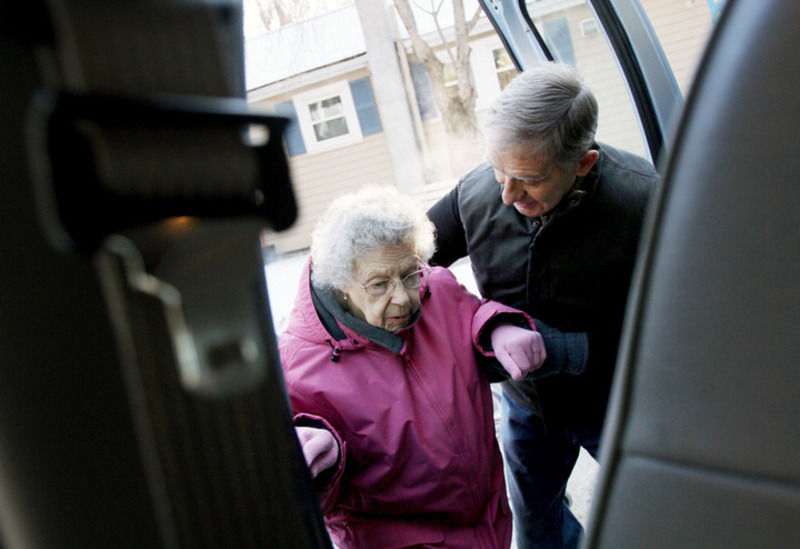 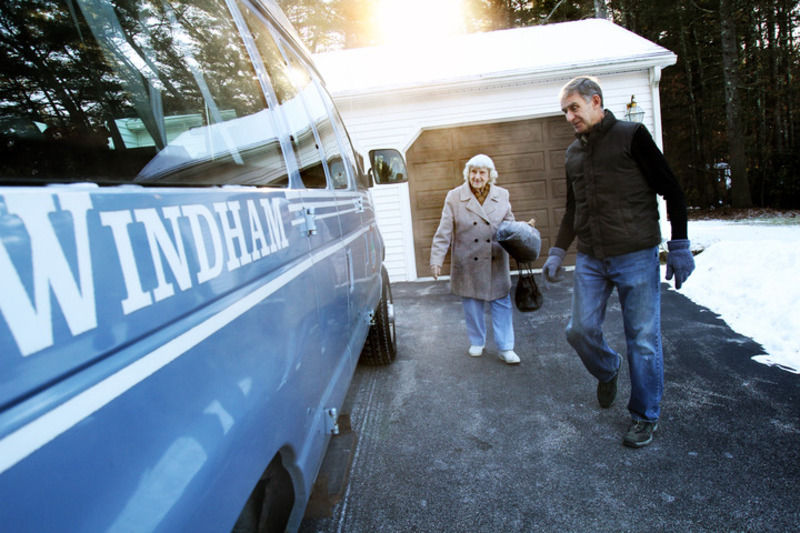 Van driver Dennis Root helps Windham resident Mary Grace Labadini to a town van that will take her to Walmart.

Windham resident John Leppala sits in the back of a town van outside Walmart in Salem. The town van is free for the elderly or disabled to use to run errands.

Van driver Dennis Root helps Windham resident Mary Grace Labadini to a town van that will take her to Walmart.

WINDHAM – Dennis Root pulls out of the parking lot behind the senior center and town offices, then turns onto North Lowell Road, bound for the Pine Hill Retirement Home.

Root is Windham’s wheel man, a volunteer who drives citizens in the town van. He is in his 13th year on the job.

It’s 9 o’clock on a Wednesday morning, 71,000 miles on the odometer, 10 degrees on the thermometer. The van is warm because someone in the town offices thought to start it up and run the heater before Root arrived for his rounds.

Root, 68, is a retiree who never had a delivery this special in his days as a rural mail carrier.

His six regular passengers, ages 61 to 93, are on their weekly shopping trip to Walmart in Salem. Their transportation won’t cost them. It is on the town’s dime, a courtesy service started at the urging of citizens in the 1990s.

Selectmen opposed the idea when first proposed back then, but town officials since have come around.

They recently voted to discontinue the town’s participation in the Cooperative Alliance for Regional Transportation. That would have cost Windham $13,000 next year.

Board members concluded it was a better value for taxpayers to put more money into the town’s own service if needed. They are putting aside up to $8,000 for the van.

“The first one we pick up is the only one in a nursing home,” Root said Wednesday. “She’s 93.”

He helps Nora Campanella, a retired millworker from Lawrence, down the walkway and into the van.

Campanella is displaced from her usual seat, the one near the heater, by the presence of an unexpected guest traveler. Root helps buckle her up in the center bench seat of the 15-passenger Ford van.

Campanella has no shopping list with her. She will browse the aisles.

“Even if I didn’t need anything, I’d go every Wednesday because of the people I have met,” Campanella said.

She is a five-year rider. She learned about the service at the retirement home.

“When he came, I just got in the van,” Campanella said, nodding toward Root. “I’m not shy.”

Neither is Mary Grace Labadini, 90, who boards a few minutes later at her home. She’s the one they call “the head leader.”

Labadini is on a mission to buy bread, pastry and some meat. She is there this Wednesday and every Wednesday.

“Unless it snows,” in which case Root and his riders will skip a week, she said.

That happened the week before.

The passengers either don’t drive because they can’t or won’t.

Sandy Morrissey, 61, “the youngest,” is a widow. Her husband died a couple of years ago and she admits she gets nervous driving, so she uses the town van.

She is shopping for her children and grandchildren. Root said she will fill the back with groceries. This week, they include bread and Scooby-Doo cereal.

Morrissey shares a picture of granddaughter Vicky with Labadini and Campanella. Vicky no longer lives in town, but remembers the women from their expeditions with her grandmother.

“She would always come and talk with us,” Campanella recalls.

“Vicky has a message for you,” Morrissey said. “She said to tell you she will see you in June.”

The passengers on the Wednesday rounds are mostly seniors, Root said.

People also can call, as Morrissey has done, to schedule rides to the doctor where the driver will wait for them.

Town Administrator David Sullivan said about a half dozen people regularly schedule trips to medical appointments with the town.

Root said some townspeople who use the service are young and disabled.

John Leppala, 67, started using the van because of a medical condition that keeps him from driving.

“I only have a little bit to get today,” Leppala said. “I doubled up before.”

He is shopping for milk, eggs, bacon, meat.

He has children to help him get around, but, with their schedules, it can be hard.

“This way, I can plan a normal lifestyle,” he said.

The other riders call him a historian. Down to his grandchildren, there have been seven generations of Roots in town, so the family does know a lot.

Root recalls his days as a boy when he said there was only one traffic light in town, a blinker on Range Road.

Frances Feroce, 86, has been riding the van for about a year. She said she gave up driving.

“My reflexes are not as good,” she said.

Feroce is a believer in the van service.

“This is exactly what I needed,” she said. “It’s a total godsend.”

Feroce likes the company, too.

“They’re constantly smiling,” she said. “They are very pleasant.”

The women talk about how they have lunch at the Subway shop as part of their weekly trip and catch up on their families.

“They gossip,” Leppala says, prompting laughter from the women.

The group marks special occasions, too, but say there is never any singing of “Happy Birthday.”

Morrissey said they don’t shop as a group; they go their different directions inside the Walmart.

Before Mary Spera boards, her fellow riders insist she will not share her age.

She doesn’t, but she does share some wisdom about the importance of the service.

“It’s wonderful,” she said. “I don’t know what we would do without it.”

Spera has taken part in the shopping trips for several years and can recall missing only a couple of weeks.

While the group takes an interest in one another’s lives, even sometimes exchanging calls, they don’t visit each other regularly.

“We don’t live close, so we don’t see one another,” Spera said.

The riders all appreciate Root and the way he thoughtfully helps them in and out of the van. They even have a thank-you for his wife, Janice, for sharing him with them.

Root spends about three hours picking up the passengers, waiting for them to shop and then returning them home.

“We have a lot of fun,” Morrissey said.

There’s something they want townspeople to know, too.

“We want them to realize how grateful we are, how much we love it,” Feroce said. “And how lost we would be without it.”