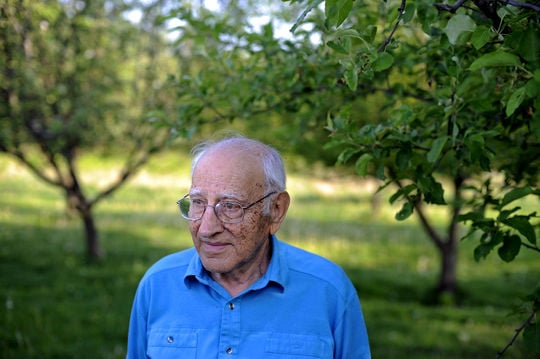 Ann Hermes/Staff photo James Derderian, 91, stands in his orchard in the backyard of his home in Methuen. Derderian recently closed his door and window business to go into semi-retirement. 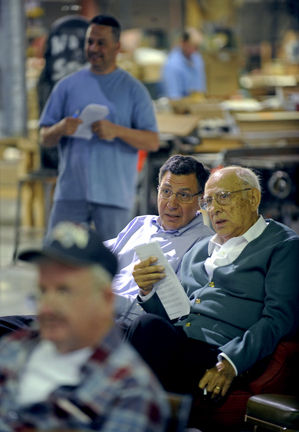 Methuen resident, James Derderian, 91, sits with his son, Jim, at the auction of his business, Merrimack Valley Wood Products in Derry.

Ann Hermes/Staff photo James Derderian, 91, stands in his orchard in the backyard of his home in Methuen. Derderian recently closed his door and window business to go into semi-retirement.

Methuen resident, James Derderian, 91, sits with his son, Jim, at the auction of his business, Merrimack Valley Wood Products in Derry.

Jim Derderian hops on his riding mower to cut the grass on his family's six or so acres on Chalet Drive on a regular basis.

When he's not mowing his immaculate lawn in Methuen, the 91-year-old mills around his garage welding and fixing machines, such as the front-end loader he bought in 1969. He recently built a grape arbor out of boredom. He grows raspberries in his yard. He has an orchard in back of his house, behind the tennis court.

If he gets stumped trying to figure something out, he reads.

"When in doubt, always look it up," Derderian said.

He may be pushing 100, but he walks with the ease of somebody half his age. Until this spring, he was still working at his business, Merrimack Valley Wood Products in Derry, N.H., but the economic recession forced him to shut it down. The door and window business employed 50 people before closing. Named a Legend of Industry by the Home Builders Association of Massachusetts in 2009, Derderian sold most of his inventory to Jackson Lumber a month ago.

"We said,'About time we closed our doors,'" he said.

Derderian insisted he isn't retiring. He speaks about "new ventures" and property in Derry he plans to develop. He also owns the Village Mall in Methuen.

What's his secret to longevity?

His wife, Liz, said he is retiring though, but that could be tough. Derderian could barely sit still during an interview at his home, where he rocked back and forth in his chair.

"I just have to do something," he said.

Derderian graduated from Haverhill High School in 1937. He became a pilot and opened a sea plane base and flying school, Merrimack Valley Sky Port, on the Merrimack River in Methuen.

A man asked Derderian to trade woodworking machinery for Derderian's boat, and Derderian accepted the offer. He then started woodworking and eventually started his business.

A flight student asked him to make a window that could be bought pre-assembled, and Derderian figured out how to do it. He built the first pre-hung window in the country for his airplane hangar, he said. Before that, windows used ropes and weights.

He built his business, along with most of his house, and owned buildings in Lowell and Boston. He invented an election booth that allows two people to vote simultaneously. He picked up beekeeping somewhere along the way, and he can cook, too.

"There's nothing he can't do," his wife said.

Except when it comes to computers.

"You talk about e-mails or e-things or whatever it is ... I don't take to it," Derderian said.

His work ethic brought him financial stability that allowed him to put nine children — four children, three grandchildren and two cousins — through college.

"He paid for all of us to go to college. A couple of us twice," said his daughter, Alison.

Genetics are on Derderian's side. His father, Krikor Derderian, lived to be 112. The Armenian immigrant was the oldest man alive at the time of his death in 1989, the younger Derderian said.

Jim Derderian is an inspiration to his family.

"Whenever I wake up on a Saturday and don't feel like doing much of anything, all I have to do is look out the window and see Dad in the yard dressed in those famous overalls puttering away at one project or another," Alison Derderian said. "That always motivates me."