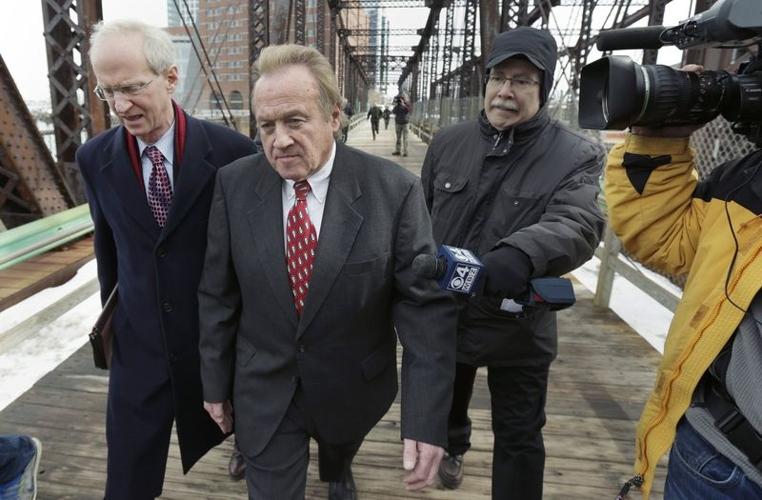 Former Methuen Town Manager Michael McLaughlin, right, pleaded guilty yesterday to four counts of falsely reporting his salary as director of the Chelsea Housing Authority in U.S. District Court in Boston. He is shown here leaving the courthouse with his lawyer Thomas Hoopes. 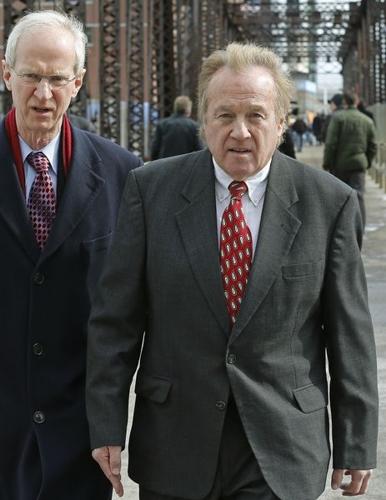 Former Methuen Town Manager Michael McLaughlin, shown right, pleaded guilty yesterday to four counts of falsely reporting his salary as director of the Chelsea Housing Authority in U.S. District Court in Boston. He is shown here leaving the courthouse with his lawyer Thomas Hoopes. Both refused to comment.

Former Methuen Town Manager Michael McLaughlin, right, pleaded guilty yesterday to four counts of falsely reporting his salary as director of the Chelsea Housing Authority in U.S. District Court in Boston. He is shown here leaving the courthouse with his lawyer Thomas Hoopes.

Former Methuen Town Manager Michael McLaughlin, shown right, pleaded guilty yesterday to four counts of falsely reporting his salary as director of the Chelsea Housing Authority in U.S. District Court in Boston. He is shown here leaving the courthouse with his lawyer Thomas Hoopes. Both refused to comment.

BOSTON — Wearing a suit and his hair in a mullet, ex-Methuen Town Manager Michael McLaughlin pleaded guilty yesterday to four counts of deliberately hiding his bloated salary as director of the Chelsea Housing Authority from federal regulators.

Michael McLaughlin, 67, of Dracut, was charged last month with knowingly concealing his salary in annual housing authority budgets from 2008 to 2011 and submitting the false figures to state and federal regulators.

The plea agreement requires McLaughlin to cooperate with law enforcement, and includes a provision where prosecutors can recommend a sentence below the sentencing guidelines if McLaughlin provides “substantial assistance” in a prosecution. The agreement does not name any other potential targets of the investigation.

U.S. District Judge Douglas Woodlock scheduled sentencing for May 14, and informed McLaughlin that he would not substitute the advice of defense counsel or prosecutors for his own discretion on sentencing. Woodlock said that each count carries a maximum sentence of 20 years, three years of supervised release and a $250,000 fine.

Merritt said McLaughlin was hired in 2000 with a starting salary of $77,500. By the time he resigned in 2011, his salary was $360,000, a figure Merritt called “exorbitant” when compared with the salaries of other public housing authority directors. McLaughlin was the fifth-highest paid housing director in the country, even though he supervised just 900 housing units, Merritt said.

McLaughlin did not speak during the hearing, except to answer a series of questions from the judge about his background and whether he understood his legal rights. Both he and his lawyer declined to comment as they left the courthouse.

McLaughlin’s legal troubles have entangled Lt. Gov. Tim Murray. Last September, the Office of Campaign and Political Finance referred its investigation into McLaughlin’s role in Murray fundraising - an investigation Murray had requested - to the attorney general.

Murray has acknowledged that McLaughlin was a political supporter, but that he never asked McLaughlin to raise campaign money for him. He has also said he was unaware of McLaughlin’s inflated salary. Murray has maintained that he was duped by McLaughlin, and said he has never asked him for fundraising help.

Public employees are not allowed to solicit or collect political contributions, host fundraising events or help identify people to be targeted for political fundraising, according to an OCPF fact sheet.

McLaughlin has had a long and controversial career in local politics, including a two-year stint as Methuen town manager in the early ‘90s.

In 1970, McLaughlin, then just 24, was elected state representative. Five years later, the Middlesex District Attorney’s office investigated him for allegedly pressuring Billerica businesses into making campaign contributions while he was a state representative. The case was eventually dismissed.

In 1976, he was elected to the Middlesex County Commission, which ran courts, jails, hospitals and work programs. Two years later, he was called to testify before a grand jury on a county commissioner’s office job-selling scandal.

Repeatedly pleading the Fifth Amendment, McLaughlin refused to answer questions about his relationship with his aides and his approval of two courthouse janitor jobs for relatives of high-ranking Boston gangsters, including the nephew of former Boston mafia boss Gennaro Angiulo. McLaughlin was never charged in the scandal, but his aide was eventually convicted.

In 1979, McLaughlin became executive director of the Somerville Housing Authority. He would hold the position, in addition to his role as county commissioner, until 1985.

McLaughlin went on to direct the Lowell Housing Authority in 1986. A year later, authorities tape-recorded at least nine conversations between McLaughlin and reputed mobster John R. “Jackie” McDermott, a bookmaker whose phone was wire-tapped as part of a state police and FBI investigation into organized crime in Lowell.

McLaughlin, who was in the running for city manager at the time, allegedly asked McDermott to pressure city councilors into picking him for the job. McLaughlin, passed over for the Lowell manager job, was never charged with wrongdoing for his involvement with McDermott. However, in 1990, Lowell Housing Authority board members accused him of politicizing the authority and bought out the remainder of his contract.

He came to Methuen as town manager in February 1990, and within weeks angry residents were calling for his resignation.

Within a month, town councilors had ordered a police investigation into his background and formed a subcommittee to explore a contract buyout. In 1991, he came within a single vote of being fired after councilors derided him as “power hungry” and a “ruthless politician.”

McLaughlin eventually resigned under pressure from the town council in October 1992.

“In all my life in politics, from the Lowell City Council to the U.S. Senate, no one worries me more than Michael McLaughlin,” the late-U.S. Sen. Paul Tsongas, a longtime McLaughlin adversary, once said.

Information from The Associated Press and State House News Service was used in this report.