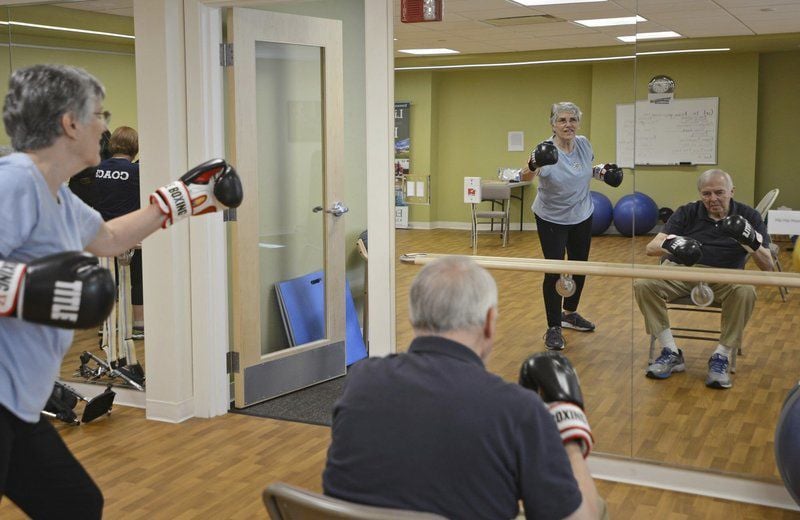 RYAN HUTTON/ Staff photo Reflected in a studio mirror, Serena and Charlie Caperonis work on their shadow boxing during a Rock Steady Boxing class at the Edgewood Retirement Community. 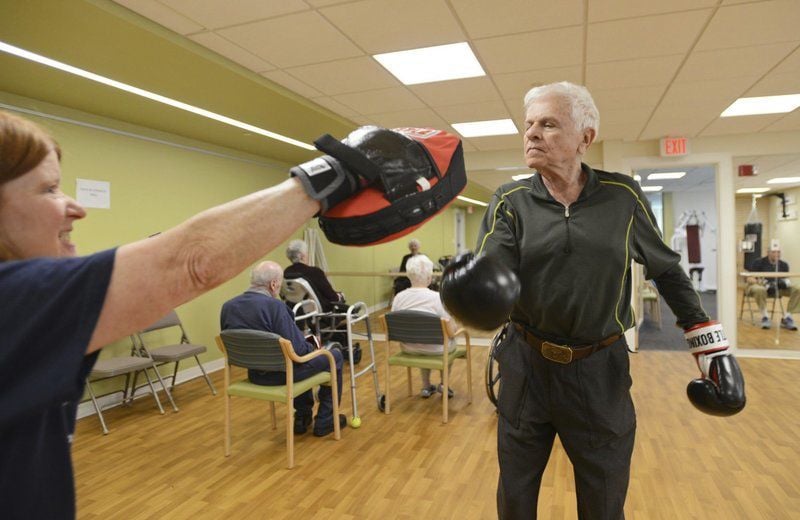 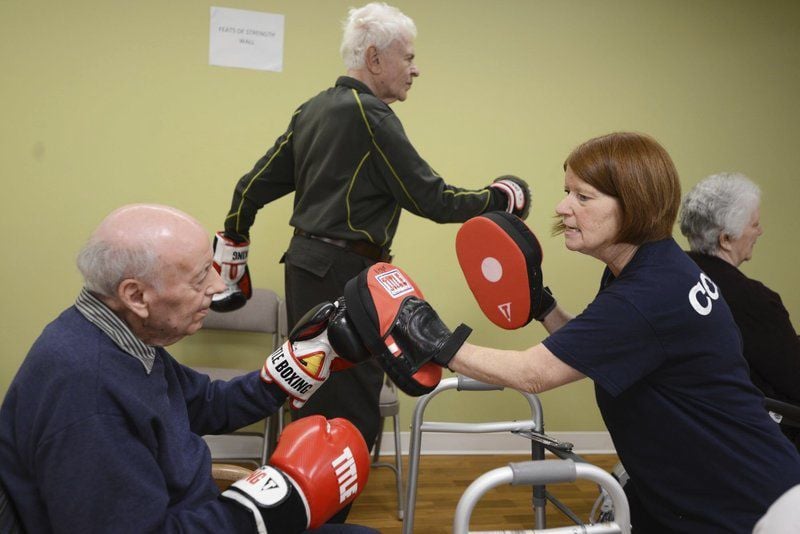 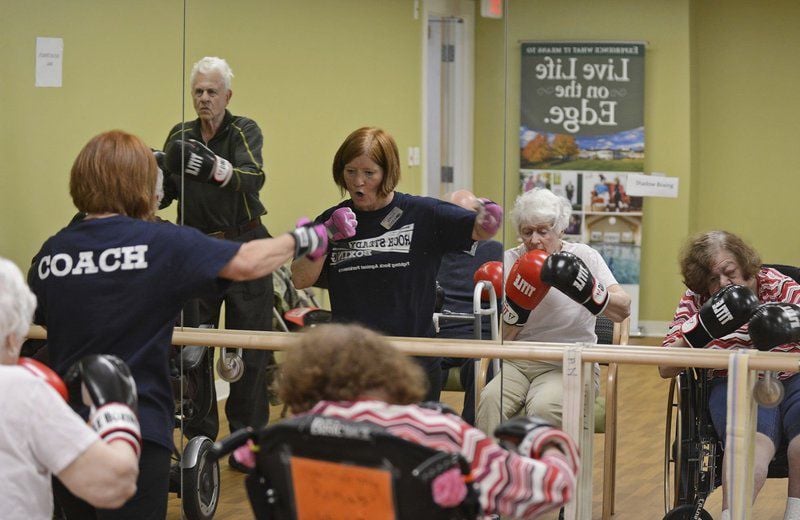 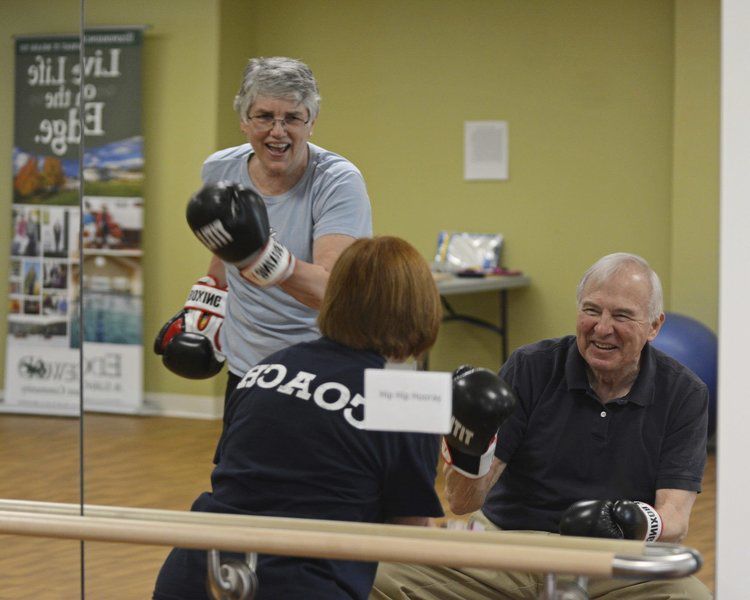 RYAN HUTTON/ Staff photo Reflected in a studio mirror, Serena and Charlie Caperonis work on their shadow boxing during a Rock Steady Boxing class at the Edgewood Retirement Community.

NORTH ANDOVER — Last time Marty Schecter boxed, it was the kind without gloves, back in the day walking home from school in the Bronx, fighting or fleeing neighborhood foes.

All these years later, the Edgewood Retirement Community resident is sinking his hands into boxing gloves to fight his Parkinson's disease. Others here do likewise in Rock Steady Boxing, a non-contact program designed to give them more control over their bodies and lives.

The classes start with them and their helpers in chairs — including wheelchairs — arranged like a boxing ring.

They are Marty and Thelma, Charlie and Sarah, and others.

Banging the heavy bag, throwing jabs, crosses and hooks at mitts, and knocking out a tempo on the speed bag might run counter to what you'd expect from people with a condition that makes it hard to move steadily, or to walk, or even to talk above a mumble for some.

But Rock Steady Boxing has attracted a loyal following since it started at the beginning of May in the fitness center at Edgewood under energetic coach Nancy Ryan.

"It makes them happy," Ryan says. "When they are hitting that bag you don't know they have Parkinson's"

They meet twice a week. Just a few months into the program, it's too early for residents to have come away with lasting physical improvements like getting to the bathroom quicker — greater independence.

It's not too early to know they are enjoying the class, however, and that may have implications for their physical health.

Ryan has worked with older people for 30 years. From day one, Parkinson's has been her nemesis. It seems to attack the smartest people.

The Edgewood wellness specialist was trained and certified by Rock Steady Boxing in Indianapolis, Indiana, to use old-school boxing circuit training and other techniques to improve the lives of those with Parkinson's.

Medical literature is inconclusive on non-contact boxing's benefits for people with the disease, says Dr. Alex Pantelyat, a Johns Hopkins University neurologist, and co-founder and co-director of the Center for Music & Medicine.

Still, he thinks it makes sense, and recommends boxing to patients.

He meets with hundreds of Parkinson's patients. He has heard from them and those of other doctors that vigorous activity has a positive influence on them — in some cases allowing them to reduce their levels of medication.

Physical activity such as boxing releases dopamine in the brain, a compound associated with pleasure. Dopamine is missing in people with Parkinson's, Pantelyat says.

"If people have more fun doing something, then they will continue doing it," he says.

About one million Americans have Parkinson's. There is no cure and it gets worse over time. Its symptoms include tremors, slowness, balance problems and, in the extremity, immobility.

More people are using exercise, including boxing, to manage their symptoms. Traditional treatments to manage symptoms include medication and surgery.

Another Rock Steady outlet in the Valley is operated by Al Latulippe in Lawrence, at Lawtown Boxing,

He remembers thinking that boxing for Parkinson's sounded crazy. But after he trained a man with the disease, the guy came out of the strenuous workout with a huge smile on his face. Latulippe was sold.

Back at Edgewood, Ryan encourages her crew to hit harder, work harder.

Among them is Sarah Warren, who didn't like boxing when she was younger — didn't like the violence. But she is at the program to feel better and likes laughing with the group, she says.

Ryan is a constant voice egging them on.

"This is your calling right here," she tells Marty. He's out of his wheelchair, standing, and hitting the heavy bag.

She turns to Thelma Shapiro, who's wearing red gloves while working on the speed bag.

"I want you to punch it like it is something bad," Ryan says.

She mumbles sometimes when she talks, but wants to speak and feel better. She wants to be less afraid to try things, like when she was kid.

She wants out of her wheelchair, and says she thinks about forging ahead when she's boxing.