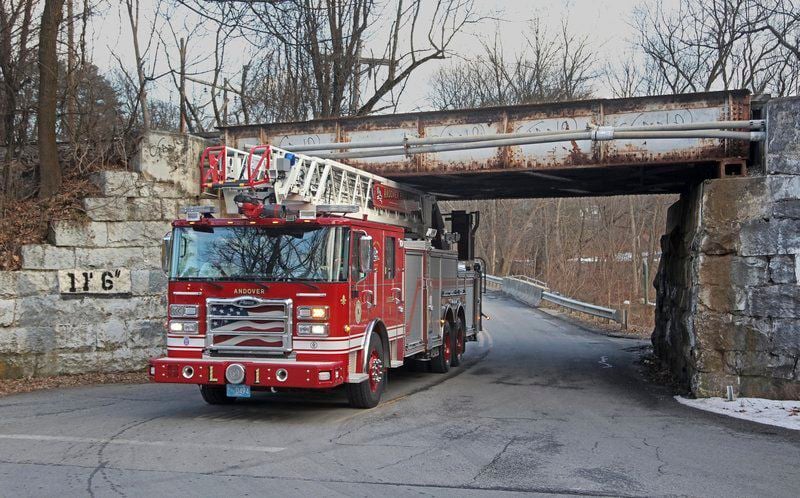 MIKE SPRINGER/Staff photo. The Andover Fire Department's new $1.2 million ladder truck makes it under the Horn Bridge on Wednesday after being modified by its maker. When it was delivered last summer, the truck was too tall to make it under the bridge. 1/8/2019 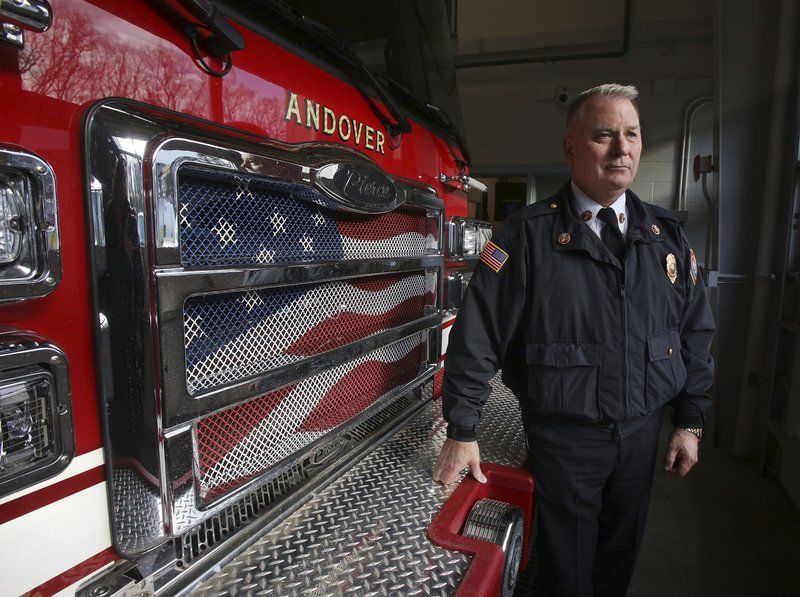 MIKE SPRINGER/Staff photo. The Andover Fire Department's new $1.2 million ladder truck makes it under the Horn Bridge on Wednesday after being modified by its maker. When it was delivered last summer, the truck was too tall to make it under the bridge. 1/8/2019

ANDOVER — With Fire Chief Michael Mansfield at the wheel, the town's new $1.2-million fire truck cleared a railroad bridge in town without any issue Wednesday.

Last summer when it first arrived, the new ladder truck was too tall to fit under the Horn Bridge, a small railroad bridge at Central Street and Red Spring Road.

This week, after work was done to reduce the vehicle's height, the fire truck was returned to Andover and is currently being stored in a bay at the town garage on Campanelli Drive.

Technology and equipment are being installed and loaded onto the truck now. Firefighter training on it is scheduled for later this month, Mansfield said.

Also there is not enough room at Andover's fire headquarters or its two substations to store the truck at this time, Mansfield said.

"If everything goes as well as I am expecting," he said, the truck should be in use by town crews at the start of February.

"There's a lot of technology on this truck that didn't exist 20 years ago or even 10 years ago," he said.

The truck is expected to be used by Andover firefighters for at least the next 20 years.

Unionized firefighters last week publicly questioned where the new truck was, roughly five months after it was returned to Pierce, the manufacturer. Mansfield rebuffed any suggestion that it was missing or he was hiding it.

On Wednesday afternoon, he took an Eagle-Tribune reporter for a ride on the new Ladder 1 and drove under the Horn Bridge to show how it cleared.

Firefighter Eric Teichert, president of the Andover firefighters Local Union 1658, said "he was glad the truck was back."

"And I would only hope the original specifications are still the same," Teichert said. "I'm extremely thankful a firefighter was able to find the problem this summer before the truck was damaged."

Mansfield stressed the truck was modified by Pierce without any further cost to taxpayers.

To reduce the height, lower profile tires were installed "which will not affect the drive-ability of the truck at all," Mansfield said.

A red piece of equipment on the top of the truck, a cradle-device that carries the ladder, was reduced. Adjustments were also made to a front nozzle and the truck's suspension, Mansfield explained.

The truck was returned to a Pierce facility in Wisconsin and then brought back to a dealer in Walpole before arriving back in Andover, Mansfield said.

Several other town-owned trucks and pieces of equipment, including a tree truck and two backhoes, do not clear the bridge, officials said.

Firefighters last Thursday night put a picture of a milk carton with the fire truck on it, asking if anyone knew the whereabouts of the truck.

The inquiry came after the union publicized a "no confidence" vote against Mansfield and said they wanted a new chief to lead the department.

Mansfield on Wednesday declined to comment on the union's recent activities or any ongoing issues.