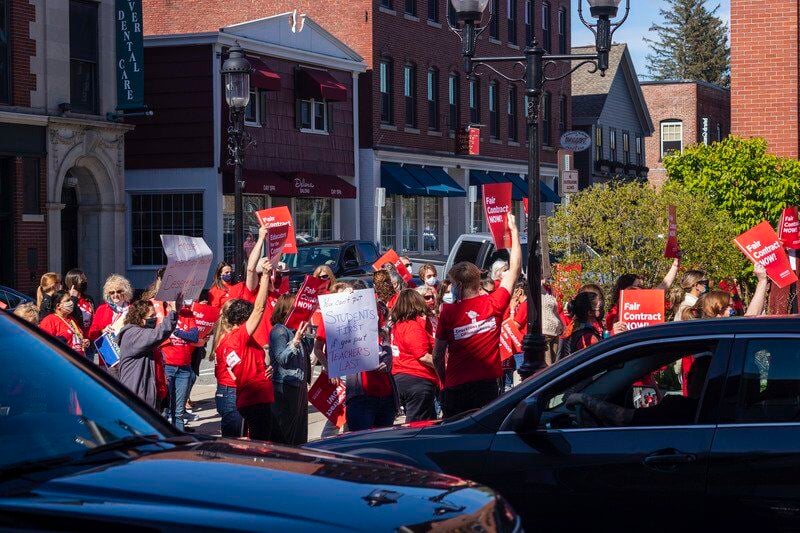 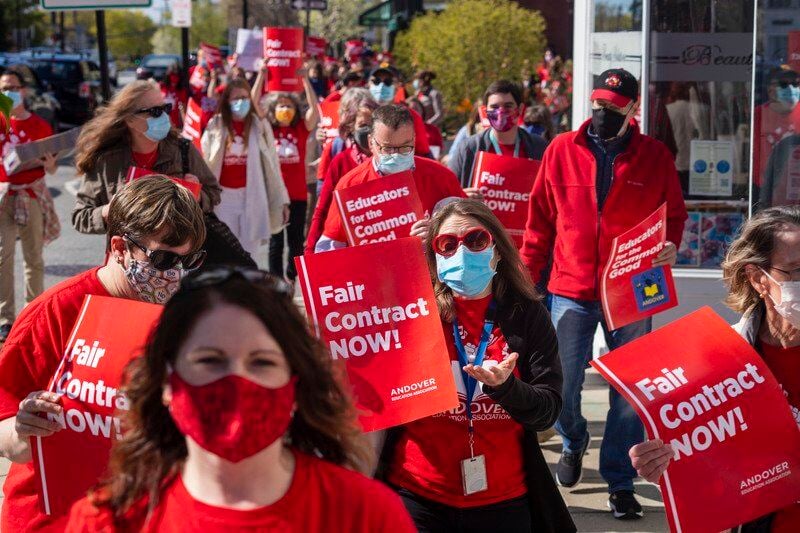 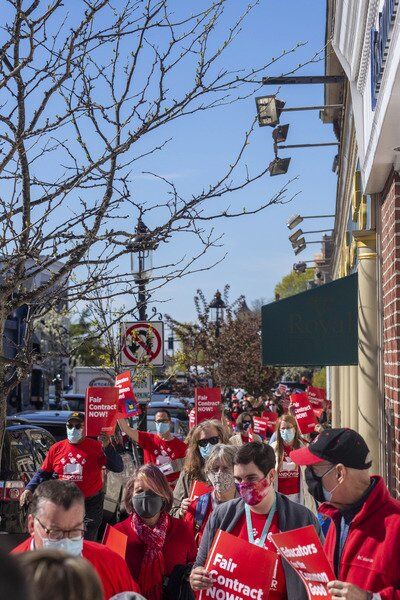 It's been a tumultuous year between the Andover Education Association and district officials. The association's five bargaining groups — teachers, instructional assistants, occupational and physical therapists, secretaries, and licensed practical nurses — have been working without contracts since August.

With instructional assistants in negotiation with the School Committee on Wednesday evening, Matthew Bach, president of the Andover Education Association, said the rest of the union wanted to provide support for them.

"We wanted to make sure they had solidarity and unity," he said.

Contract negotiations began in February of 2020, with one session before, as with most things, the COVID-19 pandemic got in the way.

"Then we proposed a one-year extension of the contract, but the School Committee wasn't willing to offer any compensation," Bach said, explaining the employees were asking for an adjustment for inflation. "Basically we are looking to keep up with inflation, or not fall too far behind inflation."

The teachers postponed contract negotiations to work out an agreement — a memorandum of understanding — for working during the pandemic. However, those negotiations were halted in November when the district announced they were deadlocked after more than 40 hours of negotiations.

The School Committee held more than 20 negotiating sessions with the teachers alone and additional sessions with the association's other groups over the past year for the contracts and an agreement about teaching during the pandemic, wrote Shannon Scully, the School Committee Chair, in a statement. The committee also offered six dates to the teachers last June and August to negotiate a three-year contract, however, the association declined and waited until resuming school, Scully said.

"We continue to negotiate in good faith and in a way that is fair to teachers and respectful and reflective of the needs of Andover students and parents," Scully wrote. "We remain hopeful we can reach an agreement prior to the end of this fiscal year, which would allow the district to provide retroactive pay increases to teachers for their hard work during the 2020/21 school year."

Since March 2021, teachers have held multiple rallies and protested outside polling locations during town elections. Bach said there's been one more negotiation session for teachers and two for instructional assistants, but no other sessions have been announced.

Bach cites multiple sticking points for the union in the negotiation, including non-monetary aspects to the contracts. Teachers at the high school seek to move back to a block schedule instead of seven classes a day, which happened this year because of the pandemic.

"While the administration is open to hearing ways to improve all aspects of school programming, including class schedules, we believe any initiative this significant should include a process of widespread participation from many stakeholders including parents and students, and should not be done by a select group at a bargaining table," Scully wrote.

The educators also want to have a clause written in about diversity and inclusion.

"We are asking for evidence of hiring retention and support for a diverse workforce," Bach said. "It's an important priority to our members and our students who are becoming more and more diverse."

The instructional assistants are fighting for the highest wage hike because they are the lowest-paid staff, Bach said. He declined to say what exact wages they wanted because they were being discussed at Wednesday night's negotiation session, he said.