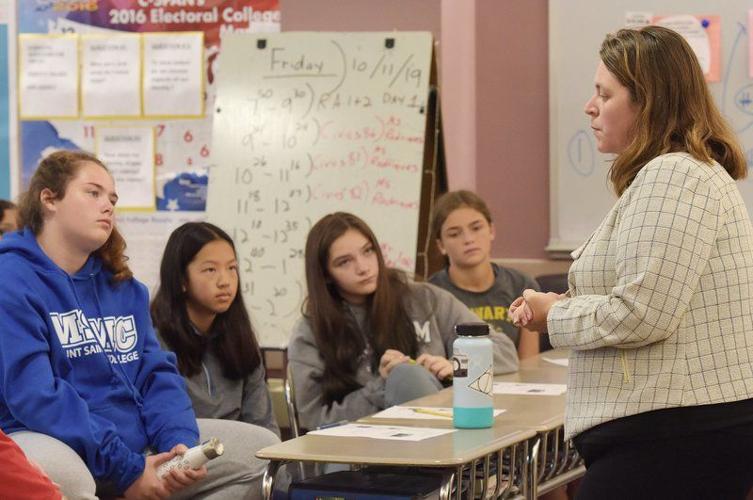 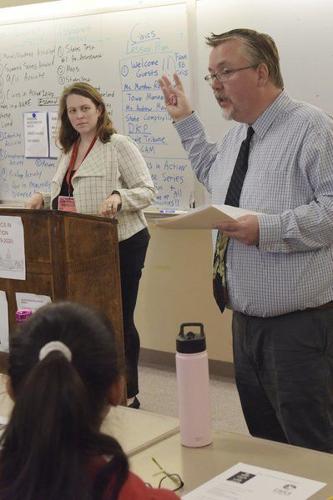 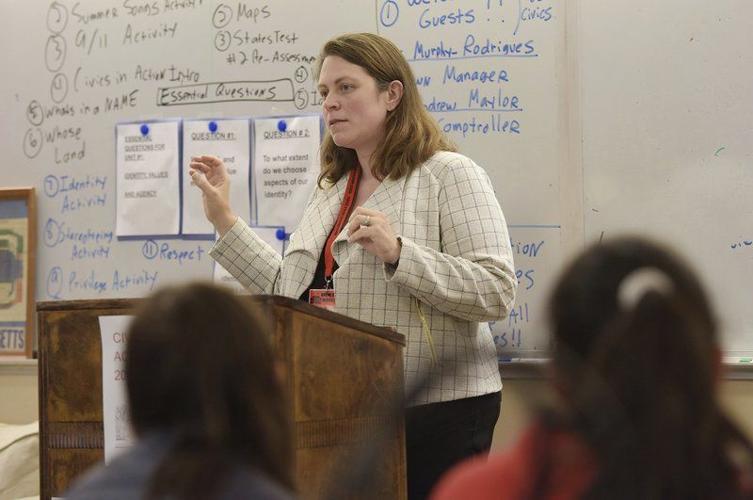 A civic agent, McGravey explained, is a citizen who is "active, not passive" in the affairs of his or her community, state and nation.

Such citizens consistently turn out for elections, are informed voters, and know who the politicians representing them are, for instance.

McGravey, who has been teaching in North Andover since 1996, is piloting a method of civics education developed by the Democratic Knowledge Project of Harvard University. The approach includes interaction with the people who actually run local, state and federal governments.

It does not include lots of memorization of dates – and there are no textbooks.

"I use civics in my job every day," said Murphy-Rodrigues, who began her job Sept. 16.

Students wanted to know what is the difference between a town manager and a mayor. A town manager is hired by a board of selectmen while a mayor is elected by the voters of a city, she pointed out.

Murphy-Rodrigues talked about how local government affects everyone in town – including eighth-graders. She noted that as head of town government, she oversees a number of departments, including the Division of Public Works, which handles snow removal and trash collection, among other duties.

Listening, she said, is a very important part of her job.

"We have to listen — really, really listen," she said.

If someone expresses disagreement with her about a decision she has made, she will say something such as, "I'm sorry you feel that way," she said.

"You can still respect someone if you don't agree with them," she told the students.

Murphy-Rodrigues, who served as town manager of Sudbury for four years before the selectmen hired her to run North Andover, said she reassures herself by knowing she's doing her "best."

She offered some advice for her young audience about how to use Facebook, Twitter and other social media.

"Don't be someone on social media that you wouldn't be proud of," she said.

Maylor, who was town manager of North Andover for slightly more than seven years before Gov. Charlie Baker appointed him to his current position in February, talked about the gas disaster that devastated North Andover, Lawrence and Andover on Sept. 13, 2018.

He pointed out that local, state and federal governments worked together to help displaced residents find shelter and put pressure on Columbia Gas to fix the damage. He urged the young people to consider careers in government.

Maylor had a successful career in the private sector as an accountant before he entered public service. He admitted that when he ran for town treasurer of Winthrop many years ago, "I got my butt kicked."

The unsuccessful candidacy, however, did not stymie his career. Maylor was hired as town accountant for Winthrop and eventually became Swampscott's town administrator.

That was the job he held before he was named town manager of North Andover. In his current post as comptroller, he oversees $60 billion in state spending.

Before the end of the school year, the eighth-graders will complete a civic action project. They haven't yet decided what it will be, McGravey said.

The students are learning about the right way to work for change in the community, state or nation. McGravey suggested Greta Thunberg, the 16-year-old activist from Sweden who advocates for solutions to global warming, is an effective civic agent.