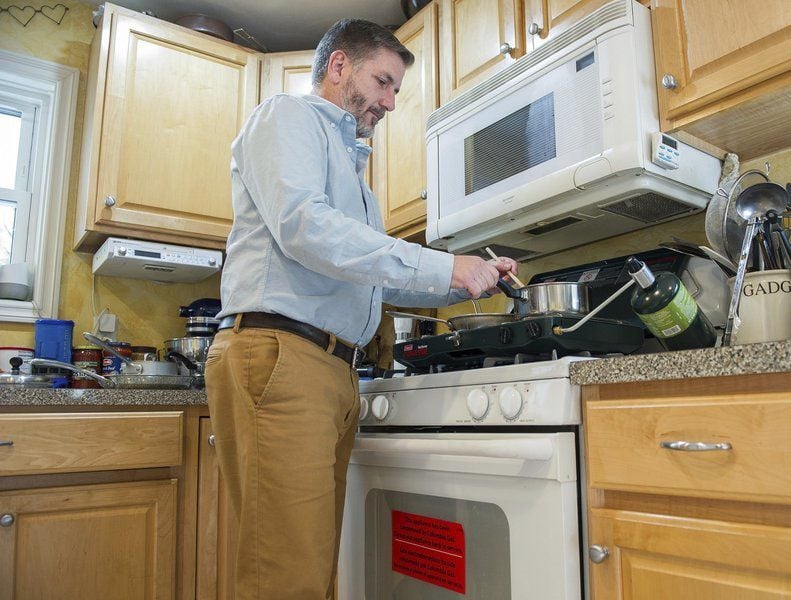 AMANDA SABGA/Staff photo John Eisenhood of North Andover cooks on a propane cooktop placed on top of the condemned stove in his home. 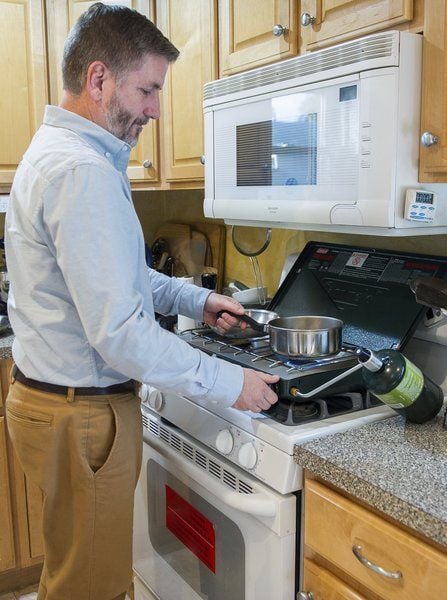 AMANDA SABGA/Staff photo John Eisenhood of North Andover cooks on a propane cooktop placed on top of his condemned stove in his home.

AMANDA SABGA/Staff photo John Eisenhood of North Andover cooks on a propane cooktop placed on top of the condemned stove in his home.

AMANDA SABGA/Staff photo John Eisenhood of North Andover cooks on a propane cooktop placed on top of his condemned stove in his home.

If Columbia Gas continues to inspect and restore gas service to homes at the current rate, it will miss its Nov. 19 deadline by months, possibly not completing restoration until as late as March 1.

According to the daily briefings provided by Columbia Gas to local officials, less than 9 percent of affected homes were deemed "house ready" as of Monday, meaning "all inside work is completed and tested, with at least one appliance ... available for re-light."

A review of the data in Columbia Gas’ daily briefings — released to the public through local officials — shows that over the last week, the company brought an average of 54 meters to "house ready" status every day. By Monday, about 670 residential meters were house ready, leaving approximately 7,000 to go. Those numbers do not include meters at commercial units.

The Eagle-Tribune used numbers from the daily briefings provided by Columbia Gas, but must note that the numbers reported for previously completed work often changed from day to day. The number of meters brought to “house ready” status on a given day were sometimes higher in subsequent briefings after they were initially reported. The company also changed its unit of measurement from “dwelling units” to “meters” on or about Oct. 17.

Data reviewed by The Eagle-Tribune accounts for residential meters made “house ready” each day from Oct. 17 to Oct. 22.

“Unless something changes drastically, the date is in jeopardy,” Lawrence Mayor Daniel Rivera said Wednesday. “The frustration and anger people have about this process, is about information.”

In response to the unexpected hurdles, a spokesman for Columbia Gas said the company will bring in additional contractors to ramp up the restoration effort; but even doubling the company's current output puts full residential restoration back by over a month, to Dec. 26.

“Three additional general contractors have been brought on to support this work, one of whom is solely dedicated to restoring service to businesses, and we continue to source additional plumbers and support resources from around the country," said Chief Recovery Officer Joe Albanese in a prepared statement.

In the daily briefing published Monday, Columbia Gas projects it will complete 1,291 residential meters this week, and ramp up projected completed meters for the following two weeks. The company notes these projections are based on the number of plumbers available.

Columbia Gas has refused to answer direct questions regarding the Nov. 19 deadline, including if and when a new deadline will be announced.

“Unless the company significantly increases the resources applied to the block-by-block repair process, thousands of homes will be left with no heat amidst winter temperatures. Without mitigation, the damage from frozen pipes will be enormous,” Attorney General Maura Healey said Wednesday in a letter directed to executives at Columbia Gas.

Healey called on Columbia Gas to be “clear and forthcoming” about the “timeline for full restoration” and suggested the company “create a contingency plan to drain water pipes and otherwise winterize homes that may not see service restored soon.”

Albanese, who was appointed by Gov. Charlie Baker, said in a statement that code violations as well as prioritizing the elderly and sick have affected the work schedule.

“Over the past several days due to the cold temperatures, we re-deployed our workforce to focus on aiding the elderly and those with disabilities and health concerns. We focused on providing the most vulnerable either temporary heating solutions or getting their homes relit and now we are returning to our block approach," Albanese said. "Additionally, some homes have required additional attention beyond the original scope to ensure these homes were safe for customers. There were various code issues, hazardous material issues, and other issues that have required our crews to spend several days longer than anticipated in some homes."

Albanese had said some of the code issues involved asbestos and lead paint abatement, opening walls to chase gas lines to fix them, and in one case, building stairs to get down into a basement.

The company maintains that it is ahead of schedule in replacing 45 miles of main gas line, with 86 percent of that work complete as of Tuesday; but work inside homes, inspecting and replacing appliances, has proven to be more of a challenge.

"Frankly, we've known since we started planning for this, that this is the most difficult part," Albanese said last week from inside a Lawrence warehouse stacked high with gas appliances for affected customers.

“I’ve been saying this for weeks, but everybody needs to start thinking about calling for housing, taking housing however close or far,” said Rivera. “You don’t want to be in a situation where you need to get someplace warm and the only place you have to get someplace warm is the congregate shelter … I’m encouraging people to get into the housing queue and call every day, twice and three times a day, to get themselves some housing.”