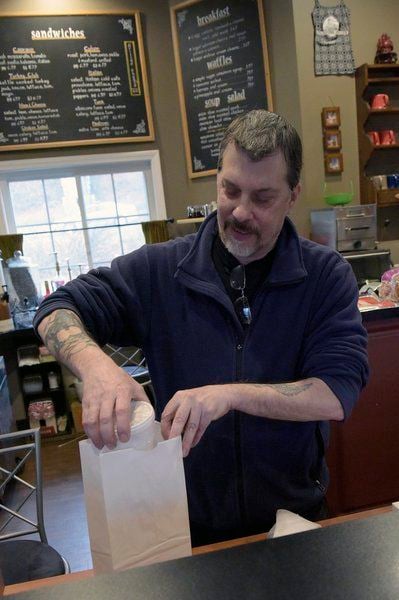 TIM JEAN/Staff photo. Kelly Meile, owner of Steampunk Station restaurant in Bradford bags up a lunch order for takeout. Steampunk is pivoting from sit-down to takeout and delivery meals following Gov. Baker's order amid the Coronavirus. 3/17/20 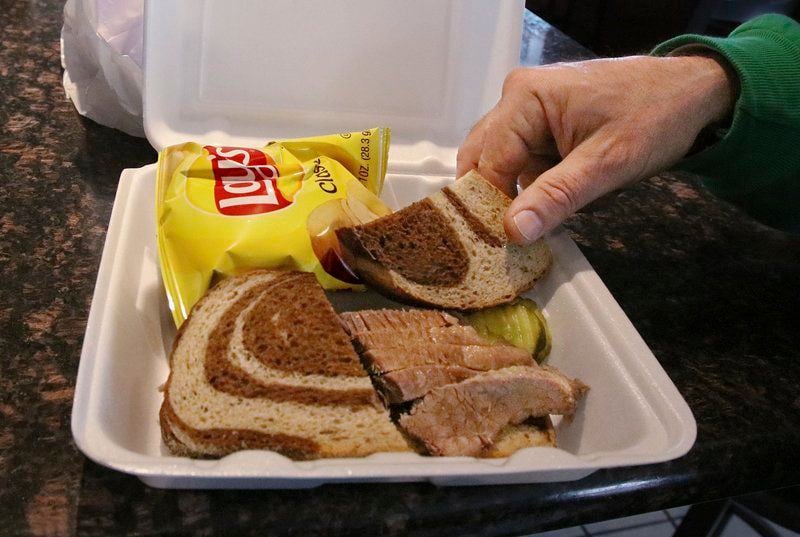 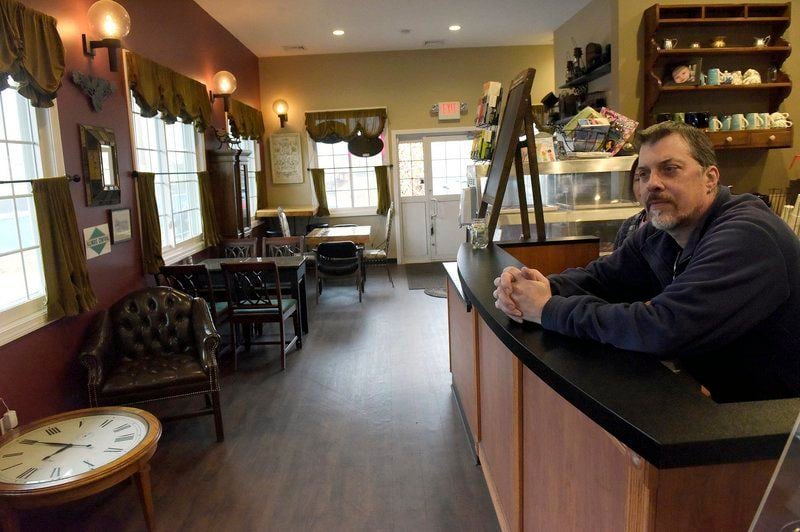 TIM JEAN/Staff photo. Kelly Meile, owner of Steampunk Station restaurant in Bradford, waits for customers to either show up or call ahead now that he can only serve takeout. Steampunk is pivoting from sit-down to takeout and delivery meals following Gov. Baker's order amid the Coronavirus. 3/17/20 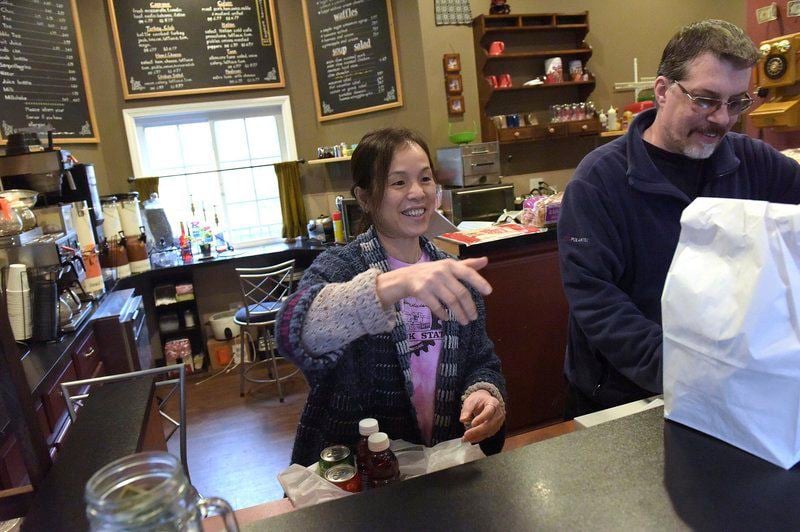 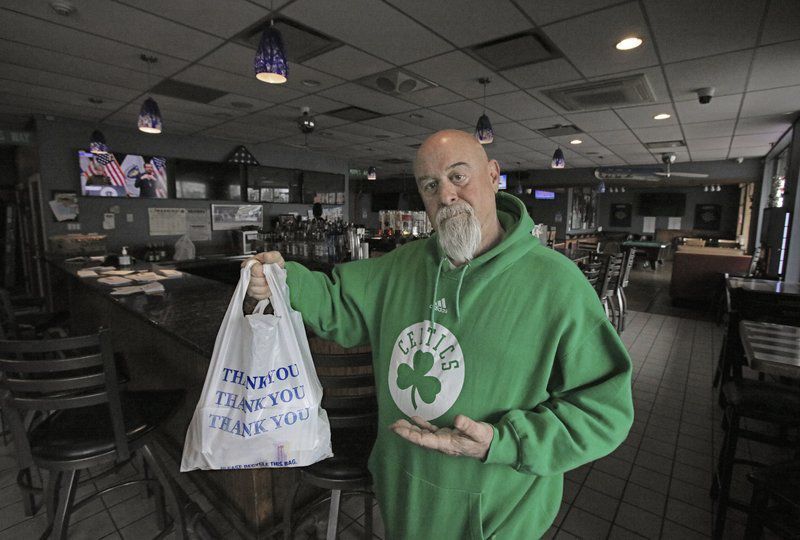 TIM JEAN/Staff photo. Kelly Meile, owner of Steampunk Station restaurant in Bradford bags up a lunch order for takeout. Steampunk is pivoting from sit-down to takeout and delivery meals following Gov. Baker's order amid the Coronavirus. 3/17/20

TIM JEAN/Staff photo. Kelly Meile, owner of Steampunk Station restaurant in Bradford, waits for customers to either show up or call ahead now that he can only serve takeout. Steampunk is pivoting from sit-down to takeout and delivery meals following Gov. Baker's order amid the Coronavirus. 3/17/20

A Navy veteran and former Malden Mills and Polartec manufacturing supervisor, Kelly Meile dipped substantially into his savings, retirement fund and even sold his vintage 1968 Camaro Rally Sport to open his own restaurant.

By 10 a.m Tuesday, he had only sold one cup of coffee — via takeout — at The Steampunk Station on Railroad Avenue in the Bradford section of Haverhill.

"This whole thing is throwing us a big curve ball," said Meile, a Methuen resident. "I hope we get some people by lunchtime so we can pay some bills."

Across the region, restaurant owners and workers are experiencing deep concern and a rapid change in working conditions as they adjust to bans on dine-in services for restaurant and bars in Massachusetts and New Hampshire. Officials in both states issued orders early this week due to concerns over the spread of coronavirus, known as COVID-19, a pandemic-level virus that can cause extreme respiratory illness and possible death.

The orders went into effect Tuesday, St. Patrick's Day, a holiday when traditionally revelers both Irish and otherwise meet in pubs and eateries for boiled dinners, Guinness stew and libations.

St. Patrick's Day hot-spots like The Claddagh and J.Brians in Lawrence and the Irish Cottage in Methuen celebrated the holiday "to-go" style — all offering a variety of specials for patrons to enjoy at home.

"We are doing grab-and-go options, like fruit salad ... to three or four different family style meals," said Christian Breen, 48, owner of the Black Water Grill in Salem, N.H., for the past 15 years.

Breen was also grateful Wednesday when N.H. Gov. Chris Sununu handed down an order allowing beer and wine to be sold with takeout and delivery food.

He described Sununu as a "governor for his people ... not just a person in an office."

"He makes a difference," Breen said.

Officials in Massachusetts are talking about allowing beer and wine sales with takeout and delivery, as well.

At Jocelyn's Mediterranean Restaurant & Lounge on Broadway in Salem, owner Jocelyn Maroun, 33, tried to get ahead of the curve by hyping takeout and delivery days before the order went into effect.

Her hummus, tabbouleh and grape leaves are among the top orders."But we are happy to accommodate any request as long as we have the ingredients," she said.

"We just have our fingers crossed," said Maroun, a Methuen native.

In addition, Maroun said the doors remain open to her employees if they need food and paper products during this time.

At Steampunk Station, Meile and Angela Mo, his girlfriend who works with him, had plenty of cheeseburger soup and chicken soup, meatballs and an array of sandwiches available. Everything is homemade, he noted.

"I'm heartbroken. I've put my whole life into this building," he said of the historic train station where his restaurant is located.

Restaurateurs work very long hours, he pointed out. And even after they close up shop they still have work to do, including shopping, to keep their businesses running.

Also in Haverhill, Kristen Carbone of Carbone's Kitchen has yet to hit the two month-mark of being open. Yet, the restaurant is facing an enormous challenge.

She said roughly 75 percent of their business has been takeout. But with Gov. Charlie Baker's declaration to stop in-restaurant service Sunday night, take-out sales will be essential.

"The support of the community is going to be huge. ... But I'd be lying if I said I wasn't scared," said Carbone, who runs the restaurant with her husband at 151 South Main St.

Baker made the right choice, Carbone said. And she's thankful for the people who have become regulars already.

She urges people to continue helping their local restaurants through these tough times.

At Taki's Pizza in North Andover, delivery drivers will bring food but have as little interaction with customers as possible.

"It's better than having people go to the stores," said owner James Xenakis, who also runs J&M Country Store and Mike's Market in North Andover.

He said his employees are doing more prep work in the morning, before the store is open to the public. They are sanitizing twice as often and wiping down surfaces people touch like doorknobs and refrigerator handles every hour, he said.

"It will be interesting to see where people get their food from. People were buying so many groceries and stores sold out in the past few days. I wouldn't be surprised if people don't get as much takeout," he said.

He said pizza and sandwich shops will be better suited for this because its more of a grab-and-go type business.

"People employed in this sector will be hurt, hopefully it will be short," he said. "I hope the impact can be minimized and I hope when this nightmare is over we will be stronger."

Breen, at Black Water Grill, said the restaurant business is known for competitiveness. This situation has encouraged camaraderie, however, and he said he's personally exchanged cell phone numbers this week with others in the business for support.

"Everybody is scared. Everybody is nervous. Everybody is in the same boat," Breen said. "At this point, who gives a bleep about who is the busiest. We have to help each other out."