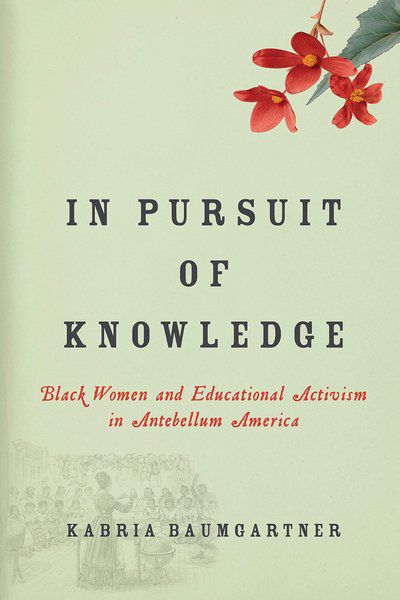 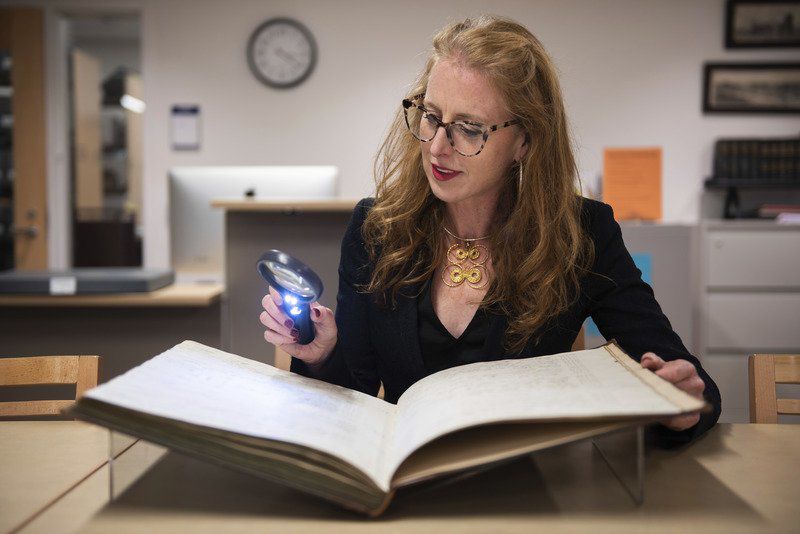 RYAN MCBRIDE/Staff photoElizabeth Duclos-Orsello, seen doing research at Salem State University, is one of two scholars who are compiling a guide focusing on African American life in Essex County that will be used to develop programs, exhibits and other material. 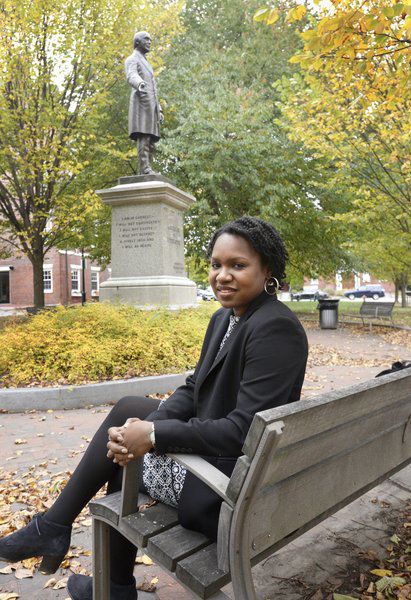 BRYAN EATON/Staff photoKabria Baumgartner sits by the statue of famed abolitionist William Lloyd Garrison in Newburyport's Brown Square. She is working with Elizabeth Duclos-Orsello to compile an inventory of archival material relating to African American life in Essex County. 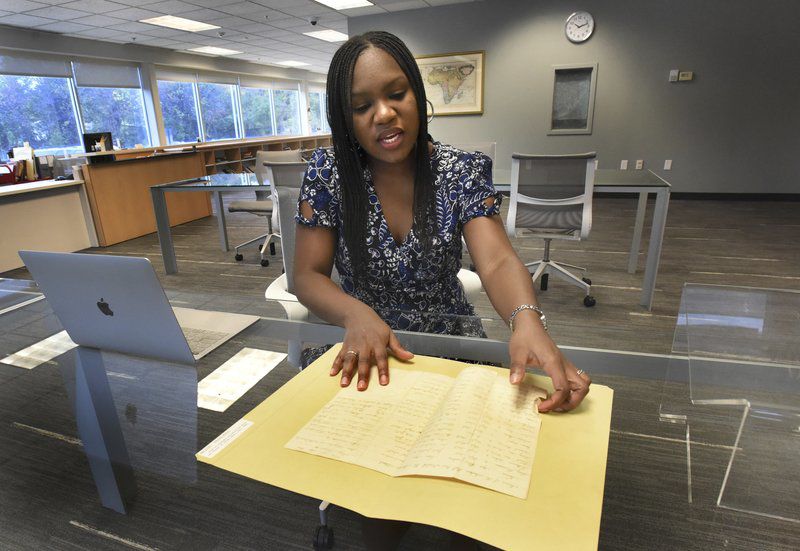 BRYAN EATON/Staff photoUniversity of New Hampshire professor Kabria Baumgartner looks through a list of student who attended the African Schcool in Salem, Mass., in January 1826. It's one of the documents held at the Peabody Essex Museum's Phillips Library in Rowley. 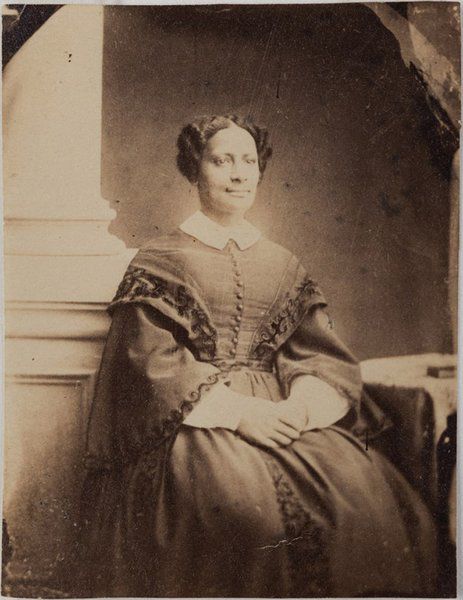 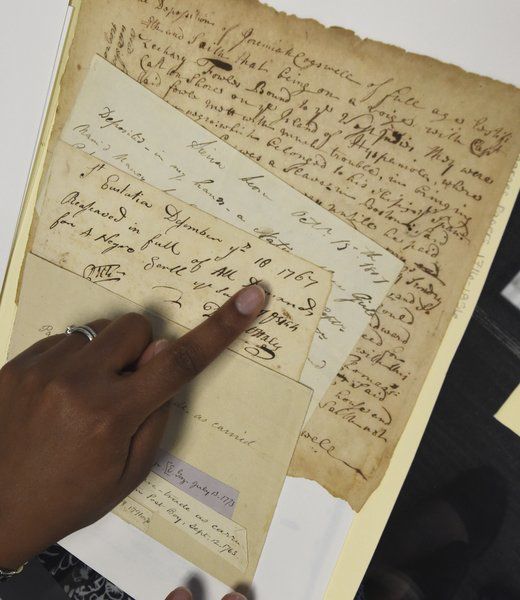 BRYAN EATON/Staff photoThese documents in the Phillips Library are related to the freeing of slaves in Salem, Mass.

RYAN MCBRIDE/Staff photoElizabeth Duclos-Orsello, seen doing research at Salem State University, is one of two scholars who are compiling a guide focusing on African American life in Essex County that will be used to develop programs, exhibits and other material.

BRYAN EATON/Staff photoKabria Baumgartner sits by the statue of famed abolitionist William Lloyd Garrison in Newburyport's Brown Square. She is working with Elizabeth Duclos-Orsello to compile an inventory of archival material relating to African American life in Essex County.

BRYAN EATON/Staff photoUniversity of New Hampshire professor Kabria Baumgartner looks through a list of student who attended the African Schcool in Salem, Mass., in January 1826. It's one of the documents held at the Peabody Essex Museum's Phillips Library in Rowley.

BRYAN EATON/Staff photoThese documents in the Phillips Library are related to the freeing of slaves in Salem, Mass.

It’s hard to share history if you don’t have all the facts, or even most of them.

That’s why the National Park Service in Salem, Mass., hired a pair of scholars to catalog every document they could find in local archives relating to African American life in Essex County.

“I think the park service wants to make sure their programming, building exhibits and interpretive programming is more inclusive,” said Kabria Baumgartner, a Newburyport resident who teaches American studies at the University of New Hampshire.

So she and Elizabeth Duclos-Orsello, who lives in Somerville and teaches interdisciplinary studies at Salem State University, have undertaken a two-year search for documents that started last August.

They have divided more than a dozen archives between them, at sites ranging from Cape Ann Museum and Historic Beverly to the Newburyport Public Library, Andover Historical Center, John Greenleaf Whittier Home and Museum in Amesbury, Peabody Essex Museum in Salem, Mass., and its Phillips Library in Rowley, and Amesbury Carriage Museum.

“We’re looking mostly in the 19th and 20th century, but we have looked at documents that go back to the 18th century, and then even more current documents,” Baumgartner said. “We’re going to be doing some interviews, too, with some African American residents in Essex County.”

The $100,000 grant for the project is jointly funded by the National Park Service and the Organization of American Historians, and the end product will be a guide that the park service can use to develop their programs, tours and exhibits.

“They can just pick up the guide book and say, this is an anniversary we want to celebrate, what do we have about slavery, what can we say about education?” Baumgartner said. “They can choose their time, and they would have the guide book and can figure out which repository has most of the documents on this one theme.”

Duclos-Orsello said that she has been doing research in these archives for 15 years, but that no one has ever conducted a comprehensive search for the “incredibly rich history of African American lives” in Essex County.

“Some of that history has been written, but much of the material and the textual evidence is either hidden, hard to access, misplaced, has not been tagged in archives, or is just unknown,” Duclos-Orsello said.

Along with cataloging all these materials, the guide that she and Baumgartner are writing will include an overview of how these archives are organized, whether the materials have been used in previous exhibits, and whether there are other collections that should be investigated in the future.

The two scholars also hope their guide will encourage collections to learn about each other, so they can tell stories about African American history that go beyond a single, local anecdote.

“If they’re all telling one story, there’s a danger in the single story, in that it allows people to think they know what the experience of African Americans was like because they know one thing,” Duclos-Orsello said. “I feel, from a social justice perspective, if we can get to a point where we can develop out some themes and threads that would allow the different sites to tell stories as part of a bigger story, then we’re doing a good job of placing the experiences of African Americans, we’re doing some good work in recentering those stories in the history of Essex County, because they’ve always been part of the story of Essex County.”

Baumgartner applies this inclusive approach to explaining history in her new book, “In Pursuit of Knowledge: Black Women and Educational Activism in Antebellum America,” which was published in December.

The book introduces the reader to individual women of color who had to fight for access to an education that their white peers could take for granted, but also shows how their personal stories are tied to historical trends.

“I argue for a framework that puts African American girls and women at the center by viewing their actions collectively, not just individually, and by analyzing their ideas, words, and experiences as the valuable historical records they are,” Baumgartner writes in the introduction.

Her book discusses documents from the Phillips Library, among many other sites, and returning to that archive for the parks service project has enhanced her appreciation of African American history in Essex County.

“As somebody who’s a resident of Newburyport, I did not know the extent of black history in this county, and I was actually kind of surprised to see how robust that community was,” she said.

One document in particular, a petition that African American citizens gave to Salem’s school committee in 1844, was believed to have disappeared, until librarians helped her find it.

“(People) knew it had been presented, but the text of it — that, no one had talked about,” Baumgartner said. “No one had written about it.”

These citizens asked to have the schools desegregated, after a petition from white citizens in 1835 had succeeded in forcing African American students out of public schools.

Baumgartner discusses those white citizens in her book and traces their motivation to possible resentment over the fact that an African American girl, Sarah Parker Remond, was at the head of her high school class.

But one of the things that Baumgartner finds exciting about the African Americans’ petition is that, more than 100 years before the Supreme Court outlawed segregation in public schools, these citizens were asserting their rights in terms that appealed to classic American ideals and anticipated arguments in later court cases.

“They say, ‘The present exclusion of our children from the best schools, from competition, from learning with white children, is felt as a slight upon us, and is calculated to repress,’” Baumgartner said.

While their petition asks for a level playing field, it also reveals that these citizens were asking for the restoration of rights that they had previously enjoyed.

“They’re making a historical point,” Baumgartner said. “It used to be better, and it used to be desegregated. They say they want to go back to the way it was.”

That in turn reveals the complexity of African American experience, because it demonstrates that desegregation was actually achieved through “fits and starts” over a long period of time, Baumgartner said.

A matter of record

Duclos-Orsello’s work on behalf of the guide project has included spending time at Marblehead Museum, where she said there are important items that no one has ever gone through.

These include two volumes of ledgers, kept by a man named Nathan Bowen, which “refer in passing to all sorts of things” that deserve to be explored, Duclos-Orsello said.

They also have vital records, which record births, baptisms, marriages and deaths and lists African Americans in separate sections.

“If you can start tracking the names of people born in the Negro section, you can figure out marriages or baptisms, and start to get a sense of the everyday lives of people of color,” Duclos-Orsello said. “That is painstaking work, but there are items in those documents that are fascinating to me.”

One of these, from 1730, concerns a woman named Katherine, who is identified as mestizo — which indicates mixed race — and is described as belonging to William Fairfax.

That same year, there is a reference in the records to the baptism of a “Negro child of William Fairfax,” while other records show that Fairfax had more than one wife and also lived in the Bahamas and Virginia, Duclos-Orsello said.

“Diving into some of these types of references and cross-references, what begins to emerge are more complicated stories that could be fleshed out,” she said.

While going from archive to archive in search of documents, Duclos-Orsello and Baumgartner have discovered that staff members at repositories are interested in their project and are eager to participate.

“But frankly, what I have discovered is, there are a couple places that have done some important work to try to tell these stories in a public way,” Duclos-Orsello said. “Historic Beverly is one of them.”

She pointed out that the organization recently launched a website that tells African American history in Beverly by focusing on people who were fighting for their freedom.

“There are some amazing stories in Beverly, particularly about Juno Larcom, who belonged to the Larcom family,” Duclos-Orsello said. “The arc of her story includes her suing for her own freedom and for some of her children. They have done enough digging around in their collections to tell her story.”

Digging is required because most collections do not include the family Bibles or letters of people who were marginalized, because no one asked for them in the past, Duclos-Orsello said.

Instead, their profiles must be reconstructed from obscure sources, such as bills of sale, which Historic Beverly has in great quantities, along with a number of ships’ logs.

“If they have records that tell these stories, it’s in glancing blows,” Duclos-Orsello said.