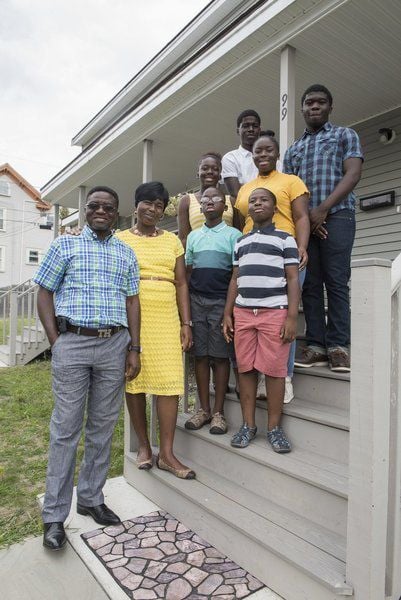 AMANDA SABGA/Staff photo Henry Tshimbalanga and his wife Annie Kabengele pose with their kids, from back left, Joel, 15, Jean-Hugues, 17, Francine, 13, Marie-Ange, 19, Glody, 10 and Jean-Benjamin, 7, at their new home at 99-101 Franklin St., Lawrence, which was built by the Merrimack Valley Habitat for Humanity. Henry and Annie put 360 hours of work into building the duplex, as part of their successful application to buy the house. 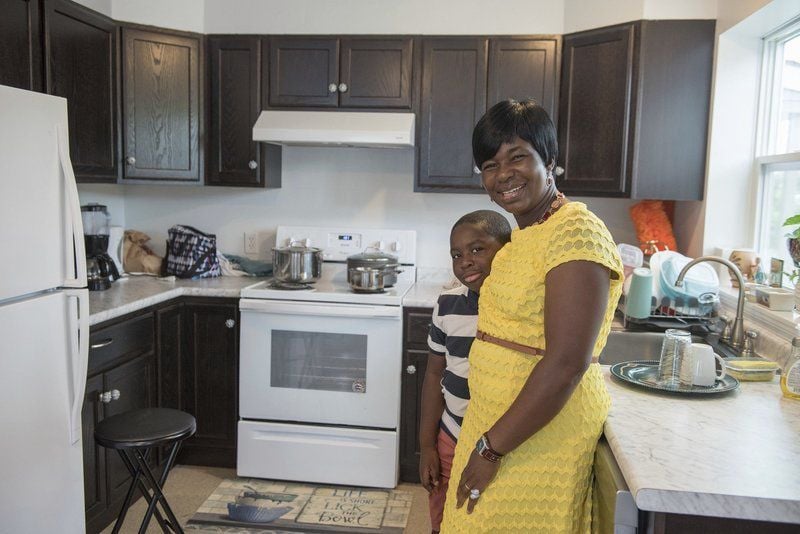 AMANDA SABGA/Staff photo Annie Kabengele hugs her son Jean-Benjamin, 7, stand in the kitchen of their new home at 99-101 Franklin St., Lawrence, that was built by the Merrimack Valley Habitat for Humanity.

AMANDA SABGA/Staff photo Henry Tshimbalanga and his wife Annie Kabengele pose with their kids, from back left, Joel, 15, Jean-Hugues, 17, Francine, 13, Marie-Ange, 19, Glody, 10 and Jean-Benjamin, 7, at their new home at 99-101 Franklin St., Lawrence, which was built by the Merrimack Valley Habitat for Humanity. Henry and Annie put 360 hours of work into building the duplex, as part of their successful application to buy the house.

AMANDA SABGA/Staff photo Annie Kabengele hugs her son Jean-Benjamin, 7, stand in the kitchen of their new home at 99-101 Franklin St., Lawrence, that was built by the Merrimack Valley Habitat for Humanity.

LAWRENCE — For Annie Kabengele and her husband, Henry Tshimbalanga, the timing could not have been better.

The apartment they had lived in for the last six years with their six children at 358 Lowell St. was condemned due to unsafe conditions and they had to move into a hotel.

Four days later, they were in a brand-new home at 99-100 Franklin St. That was no accident, however.

The couple, recently sworn in as U.S. citizens with their six children, helped build the home through the Merrimack Valley Habitat for Humanity.

"We applied two years ago," said Henry, referring to Habitat's home ownership program. "The house was almost finished when the apartment was condemned. We were very lucky."

With their children, the couple, originally from the Democratic Republic of Congo but living in the U.S. after winning a visa lottery, could have been homeless.

Between them, Annie and Henry put 360 hours of sweat equity into the duplex on the Franklin Street lot, according to Meegan O’Neil, executive director of Merrimack Valley Habitat for Humanity.

"They helped to build their home," said O'Neil, adding that the family qualified to live in one half of the duplex, the other half being owned by a single mother with two children.

O'Neil said that the eight-member family moved in about a month ago after rising to the top of the organization's family-selection process.

"They had a need for housing. They were willing to partner with us. They qualified based on income for a 30-year affordable mortgage. And they agreed to put in the sweat equity," she said.

Because their old apartment, which is not far from their current home, was condemned, their situation became somewhat of an emergency, so Habitat is letting them rent to own until they can sign the mortgage. Both of the parents work as custodians at Mary Immaculate Nursing Home.

O'Neil said their mortgage will be based on a formula used by Habitat for Humanity — amounting to 30 percent of the homeowners' income — or anywhere from about $800 to $1,200 a month, which includes principal, interest, taxes, insurance and homeowners' association fees.

It's a good deal for the homeowners, as the units have been appraised at $250,000 each, O'Neil said. The organization protects the affordability of the property, and others it is building, by adding a "deed rider" which uses a formula to tie the value of the house to the area's median income.

Even though the house isn't fully furnished, the family has already made their mark.

Entering through the front door from a shared porch, the first thing a visitor notices is hardwood floors, freshly painted walls, and some gleaming new furniture.

"We threw everything away" from the old apartment, Annie said. A big-screen TV, a glass-topped table and a soft rug take up one part of the living room, leaving space for the eventual addition of a new couch or sectional.

"That will be next week," Henry said, laughing.

The next room in the open floor plan is the dining room with a long table, certainly capable of seating eight people.

"And here's my office," said Annie, giggling and pointing to a kitchen with spotless new counters, cabinets and appliances. A door opens to a small back porch and a fenced-in city playground beyond the back yard, which on a summer afternoon last month was teeming with children from a nearby day camp.

Upstairs, the four boys sleep in two bunk beds in one room, while the two girls sleep in a double bed in the other room. The master bedroom is next to the full bathroom. A half-bath is on the first floor.

When asked what he thought of his new home, 7-year-old Jean-Benjamin put his hand up to his mouth and made the thumbs-up sign. Then he ran off, thumping loudly back down the stairs.

His older brother, Glody, 10, sitting on a couch in the partially finished basement, was a little more talkative.

"I just like the house ... everything," he said, as he settled in to watch a movie.

Seventeen-year-old Jean-Hugues said he liked the neighborhood because it was close enough to their old apartment and his friends who live nearby.

"It's great, I have a lot of friends around here," said the rising senior at Notre Dame Cristo Rey High School, which is just around the corner.

Older sister Marie-Ange, 19, entering her sophomore year at Fitchburg State University, said that even though they've only been there a month, "it feels like home."

"It's really nice," she said. "There's a lot of room for my little brothers to run around."