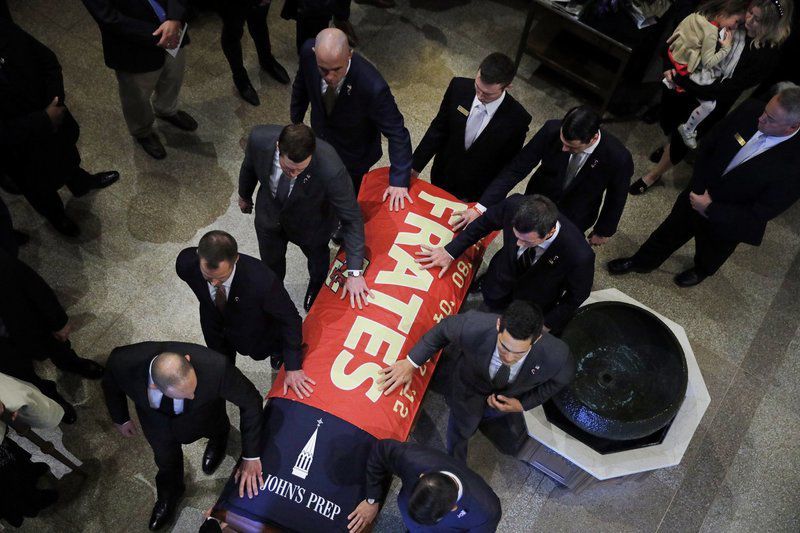 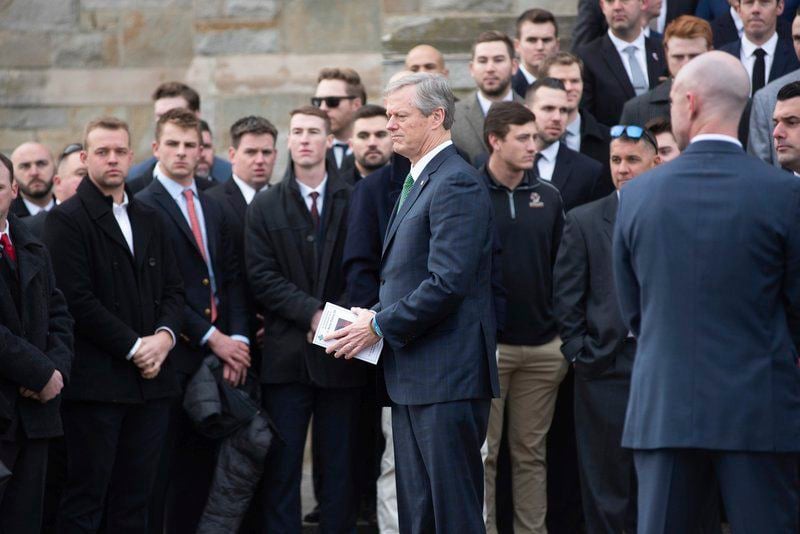 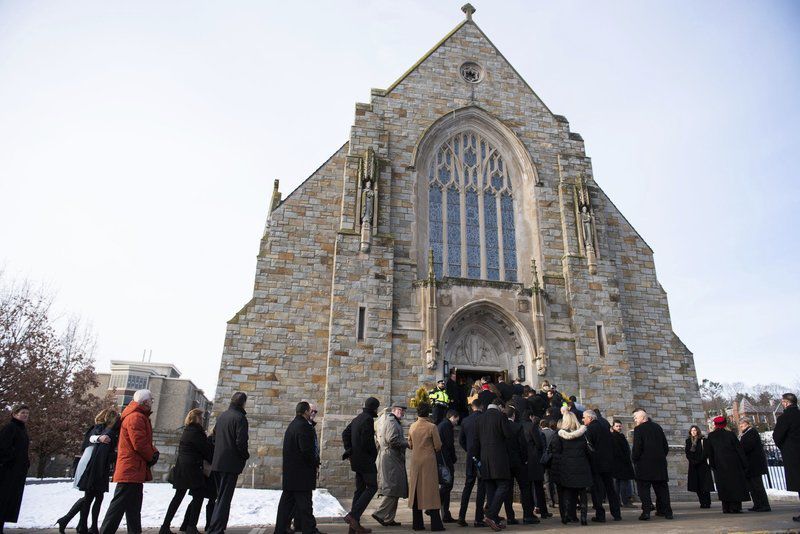 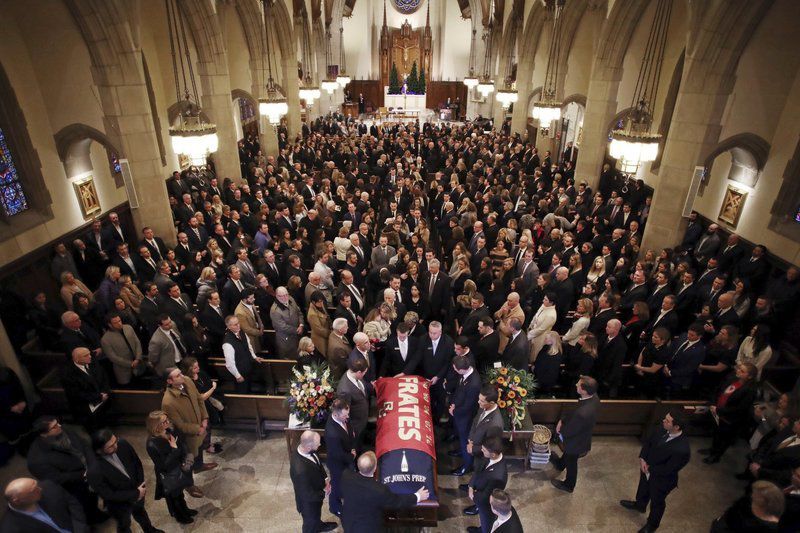 Craig F. Walker/Boston Globe pool photoThe procession follows the casket of Pete Frates, draped in a flag bearing his name, before the start of a funeral Mass for Frates Friday at St. Ignatius Church in Chestnut Hill. Frates, of Beverly, died Monday. He was 34. 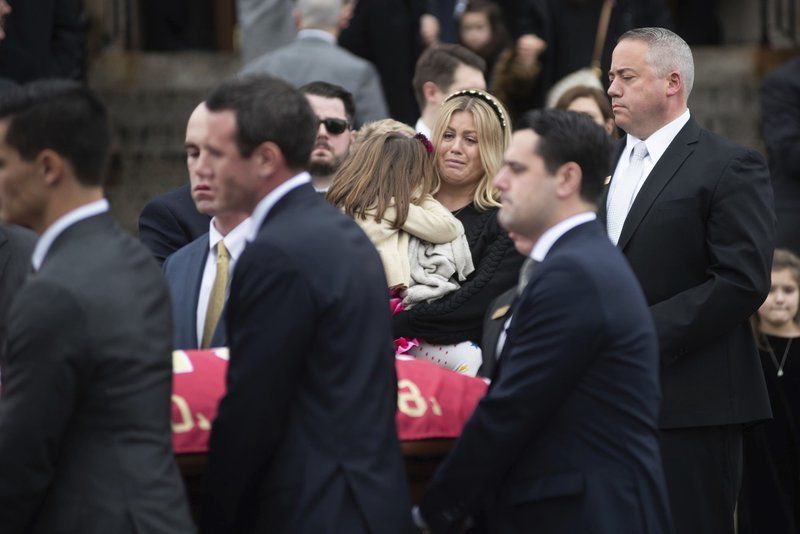 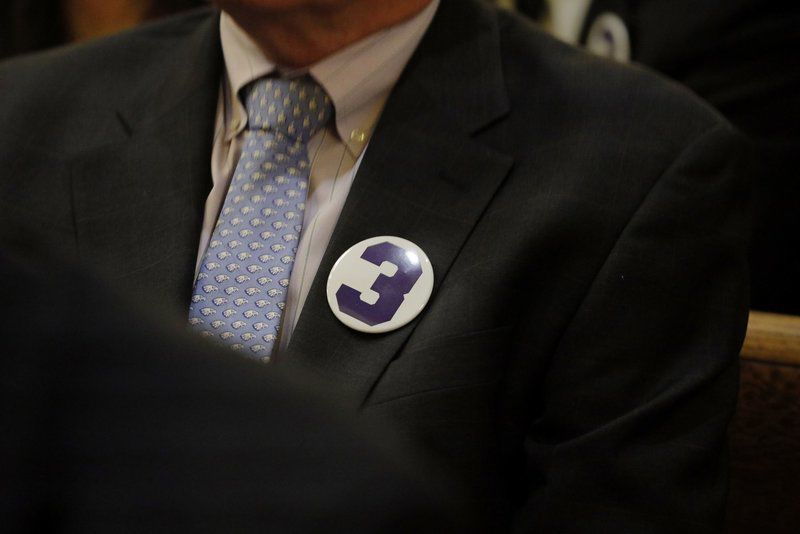 Craig F. Walker/Boston Globe pool photoMany in attendance at the funeral for Pete Frates wore buttons with Frate's No. 3 on them. 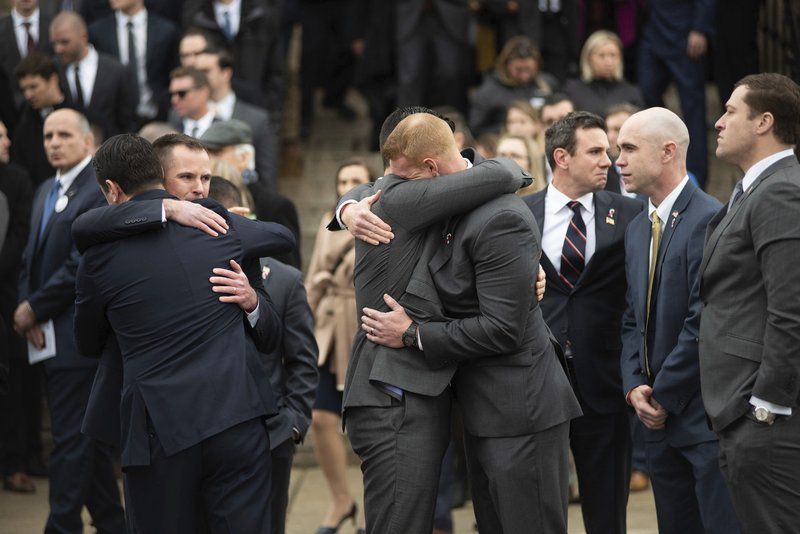 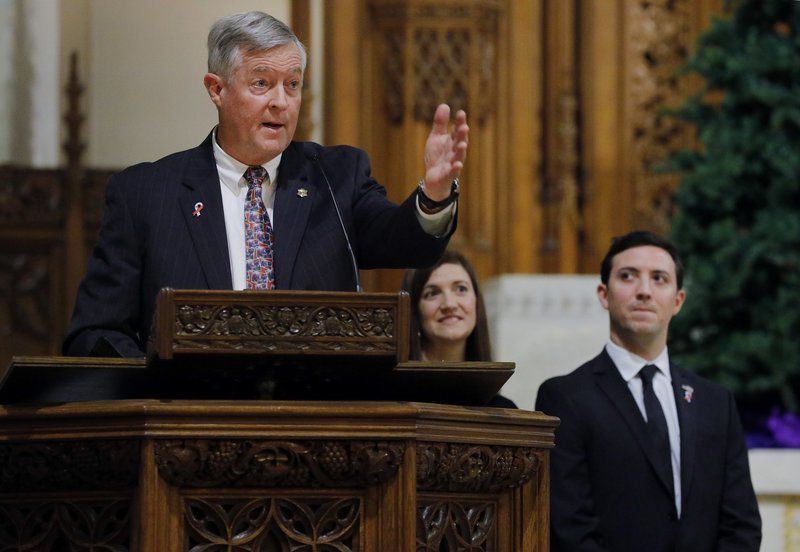 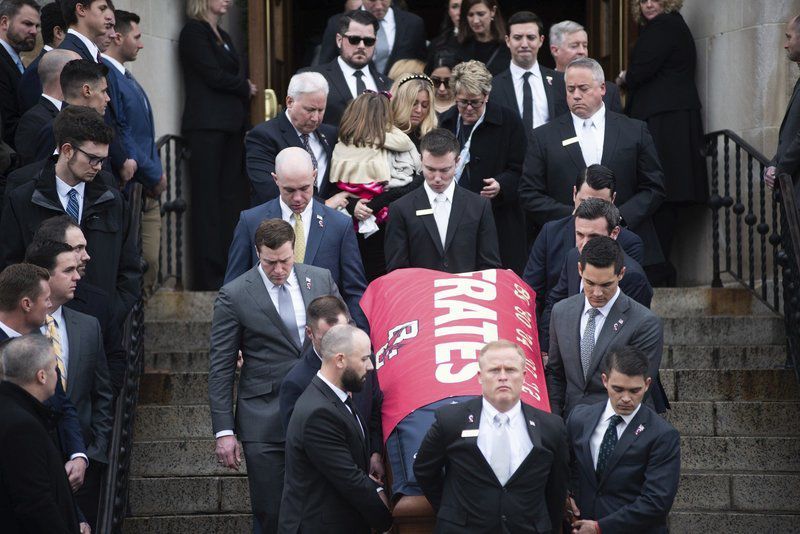 RYAN MCBRIDE/Staff photoPallbearers, led by Beverly City Councilor Tim Flaherty, exit St. Ignatius of Loyola Parish in Chestnut Hill Friday with the casket of Pete Frates after his funeral. Frates' wife Julie, their daughter Lucy, and other members of the Frates family follow behind. 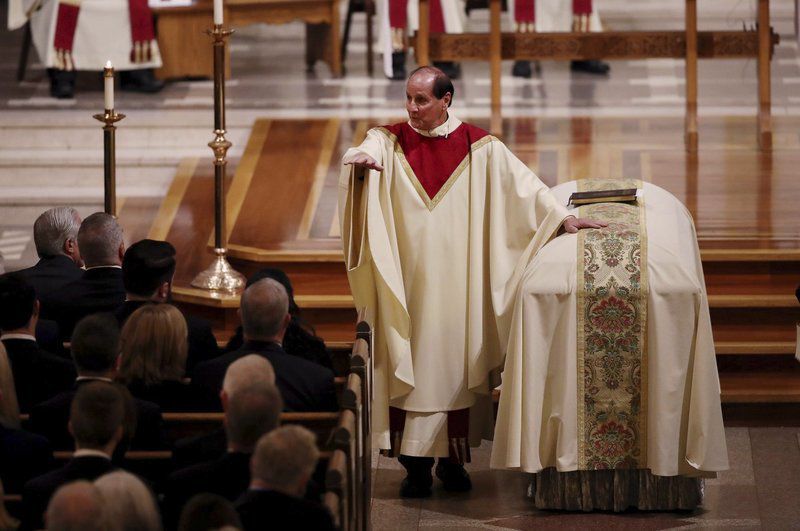 Craig F. Walker/Boston Globe pool photoThe procession follows the casket of Pete Frates, draped in a flag bearing his name, before the start of a funeral Mass for Frates Friday at St. Ignatius Church in Chestnut Hill. Frates, of Beverly, died Monday. He was 34.

Craig F. Walker/Boston Globe pool photoMany in attendance at the funeral for Pete Frates wore buttons with Frate's No. 3 on them.

RYAN MCBRIDE/Staff photoPallbearers, led by Beverly City Councilor Tim Flaherty, exit St. Ignatius of Loyola Parish in Chestnut Hill Friday with the casket of Pete Frates after his funeral. Frates' wife Julie, their daughter Lucy, and other members of the Frates family follow behind.

BOSTON — The grieving over the death of Pete Frates continued on Friday as hundreds packed a Catholic church at Boston College for his funeral Mass. But John Frates, Pete's father, made it clear that the sad times would be over as soon as the last hymn was sung.

"When we walk out of this beautiful, magnificent church we're done grieving," John Frates said during the eulogy for his son. "All we're doing is celebrating Pete Frates for the magnificent person he was."

The funeral Mass at St. Ignatius Church on the Boston College campus culminated a week of outpouring for Pete Frates, a Beverly resident who gained fame for his inspirational battle against ALS disease. He died Monday at the age of 34.

Some people showed up more than two hours before the Mass to get a seat inside the church, where the altar was decorated with Christmas trees. The Mass was shown on a screen in the basement of the church to accommodate the overflow, and was also streamed live on Boston College's website.

The ceremony drew leading figures from the political and sports worlds, including Gov. Charlie Baker, Boston Mayor Marty Walsh and former Boston Bruins star Ray Bourque. Famed Irish tenor Ronan Tynan sang two songs in church before the Mass began. Police escorted the funeral procession from Beverly to Boston with a side trip to St. John's Prep in Danvers, where students and staff lined up wearing No. 3 pins, the number Frates wore as a top athlete at the Prep and Boston College.

Pat Quinn, an ALS patient who is credited with helping Frates inspire the Ice Bucket Challenge, sat near the front of the church in his wheelchair for the service. Current and former members of the Boston College baseball team, which Frates once captained, stood as a group nearby. Julie Frates, Pete's wife, sat among family members in the pews holding their 5-year-old daughter, Lucy, who wore a red bow in her hair.

Looking out over the packed church, with his son Andrew and daughter Jennifer standing behind him for support, John Frates called the tribute "awesome" and "magnificent." He joked that Pete loved pomp and circumstance and would have felt right at home with the sports heroes, political leaders and captains of industry.

"Pete had a healthy ego," his father said. "That's why he accomplished so much."

John Frates thanked the four major Boston sports teams for supporting Frates, who is credited with helping to raise $220 million for ALS research. He gave a "special shoutout" to the Red Sox for giving Pete a World Series ring, which he said "really completed his baseball career." Red Sox President and CEO Sam Kennedy was among the mourners.

John Frates called Julie Frates "truly Pete's love," saying that she "gave him the miracle of Lucy" and "made Pete complete."

Frates told a story about the day Pete went out to do a few snow-plowing jobs in the neighborhood and didn't come back for six hours because he stopped to help so many people, and wouldn't accept any money.

"The currency that Pete worked in was helping others," his father said. "He was a perfect Jesuit in that way."

Frates said he wanted to ask people three things — to stay with the Frates family's mission of striking out ALS; to love and support Julie and Lucy; and to stop grieving and begin celebrating Pete's life.

"There's no crying in baseball, right?," he said. "The words he said the night he was diagnosed is, 'There's no wallowing in ALS.'"

Frates asked the crowd to join him in reciting words that Nancy Frates, Pete's mother, once found in Pete's school work. They were printed on the back of the funeral program and labeled "Pete's Affirmation."

"Be Passionate. Be Genuine. Be Hardworking. And don't ever be afraid to be great!"

As John Frates returned to his seat after the eulogy, he received a standing ovation.

The Rev. Tony Penna, a priest at Boston College who led the Mass, said the first time he heard the name Pete Frates was when an acquaintance from Beverly told him, "There's a kid in Beverly named Pete Frates. We got to get him. He's perfect for Boston College."

Penna compared Frates to Mother Teresa in terms of the "power" and "juice" they had to affect people's lives.

"This Christian did it right," Penna said. "He inspired this priest, and I'm sure you're here because he inspired you, too. You can be the letters of recommendation to God for Pete. The gates of heaven should be wide open today because this man lived an impactful life, a good life."

The crowd broke out in applause after Penna's homily.

After the funeral, current and former Boston College baseball players lined up at microphones across the street from the church to speak to the media about Frates. Ryne Reynoso, who roomed with Frates in his junior year, said, "I'll miss his smile the most."

Chris Shaw, who now plays for the San Francisco Giants, said he was 13 when he first met Frates.

"When you met Pete, you wanted to be Pete," Shaw said. "He was charismatic. I've got six guys sleeping on my couch because they came from across the country to be here (for the funeral). Pete did more than anyone could possibly imagine."

A Celebration of Life in honor of Frates will be held Monday from 4 to 8 p.m. at St. John's Prep in Danvers.

Staff writer Paul Leighton can be reached at 978-338-2675 or pleighton@salemnews.com.