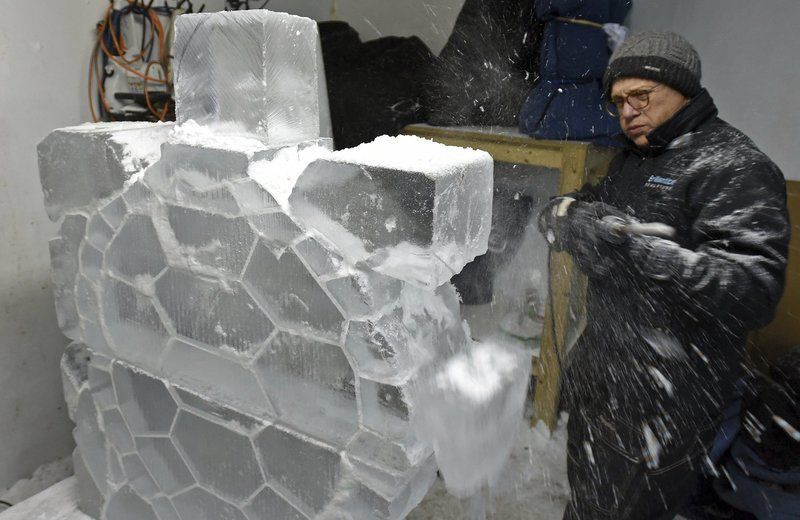 RYAN HUTTON/Staff photo. Don Chapelle, owner of Brilliant Ice Sculpture, works in his Lawrence shop on a sea turtle for the New England Aquarium for the First Night celebration on New Year's Eve. 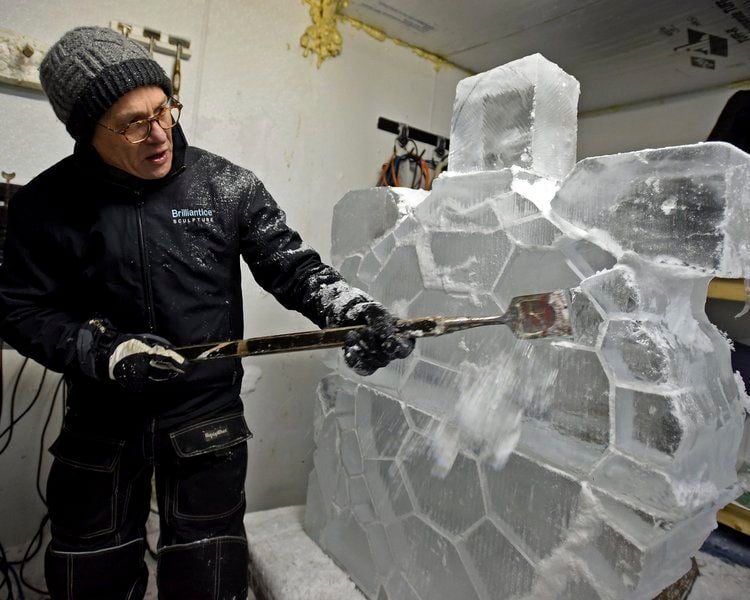 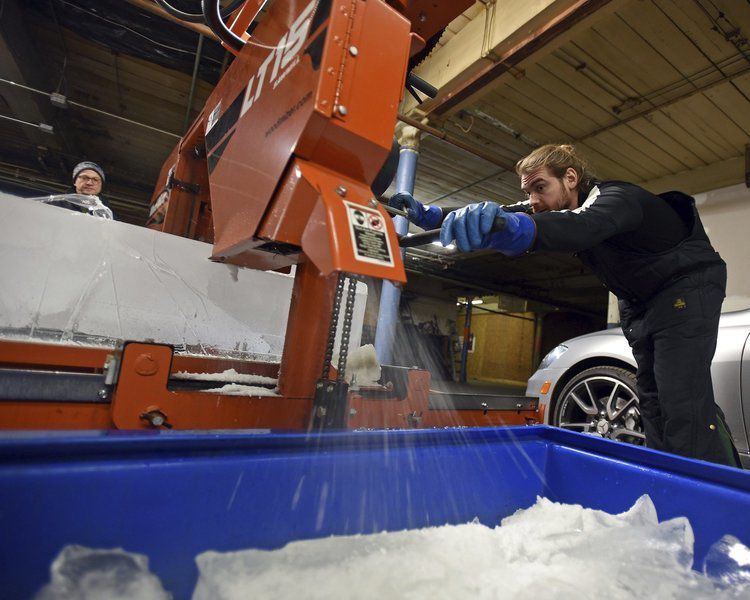 RYAN HUTTON/ Staff photo. Lars-Erik Miller, right, cuts an inch or two off of a 300 pound ice block in the Brilliant Ice Sculpture shop in Lawrence while owner Don Chapelle looks on, left. 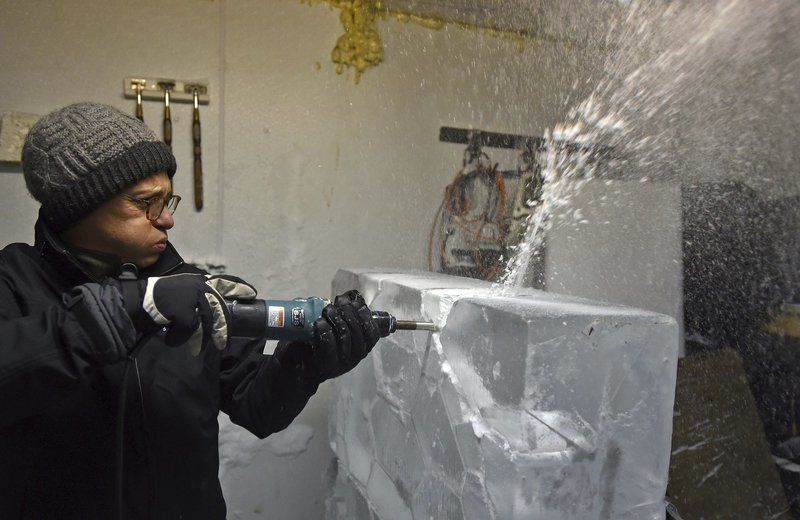 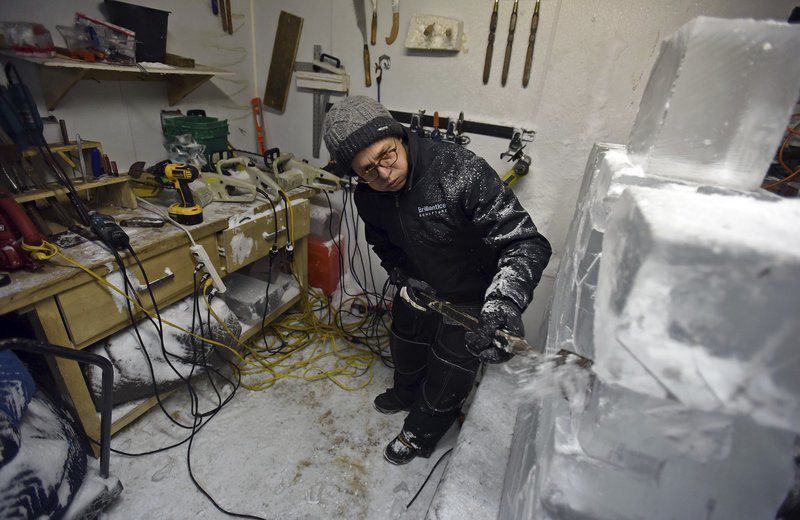 RYAN HUTTON/Staff photo. Don Chapelle, owner of Brilliant Ice Sculpture, works in his Lawrence shop on a sea turtle for the New England Aquarium for the First Night celebration on New Year's Eve.

RYAN HUTTON/ Staff photo. Lars-Erik Miller, right, cuts an inch or two off of a 300 pound ice block in the Brilliant Ice Sculpture shop in Lawrence while owner Don Chapelle looks on, left.

LAWRENCE — In November 2018, the New England Aquarium rescued Munchkin, a sea turtle that had been stranded on Great Island, which is located off Cape Cod.

The aquarium nurtured the turtle at its Animal Care Center in Quincy, restored her health and released her back into the ocean in July. Aquarium employees named her Munchkin and she is among hundreds of hypothermic sea turtles they have rescued and rehabilitated.

The rehabilitation of the sea turtles is the inspiration for master sculptor Don Chapelle's latest contribution to the aquarium. Chapelle, of North Andover, is replicating Munchkin out of 40 blocks of ice. On Dec. 26, the finished sea turtle, along with a coral reef and a school of fish he is making, will be assembled in the New England Aquarium plaza in Boston.

Over the years, Chapelle has crafted countless creatures from the ice he produces at his 468 North Canal St. shop. Much of his work has been displayed at the aquarium.

Using chisels, chain saws, a torch, a die cast router and other tools, he has carved a lobster, a sea lion pup, an octopus and a fur seal, to name a few. Last year, he sculpted a huge family of penguins for the aquarium.

Chapelle's place of business, Brilliant Ice Sculpture, located in a former textile mill that was built in 1902, has 10 ice-making machines. To get the right ice for sculpting, Chapelle explained, it has to freeze from the bottom up.

The machines circulate the water to make that happen. A finished block of ice has a temperature of 41 degrees below zero, he said.

This is not a business for people who can't tolerate the cold. Chapelle and his team do much of their work in a freezer that's 20 degrees. They wear thick overalls as they chip away at the ice.

Chapelle employs a full-time sculptor, Lars-Erik Miller, who graduated from the UMass Lowell with a fine arts degree; and two part-timers, Jeff Hayward and Josh Rondeau. Miller has been working with Chapelle for eight years.

"It has its challenges," Chapelle said of the work he has been doing for more than 30 years. "It also has to be delivered."

He has two cargo vans to complete that task.

Munchkin, for example, will consist of nine pieces. Each piece, including the head, flippers and shell, will be carved in the shop, then assembled in front of the aquarium.

How long will the replicated Munchkin last?

It all depends on the weather, Chapelle noted. January thaw temperatures hitting the 50s could cause Munchkin to go the way of Frosty the Snowman.

On the other hand, a cold snap could keep Munchkin intact for days or even weeks.

Unlike granite and marble, ice does not last long. Isn't it unsettling to put all that time and effort into creating, say, a sea turtle, only to see it melt away?

"When it's a nice piece, it's really hard," Chapelle said. For the most part, however, "we kind of forget about it," he said.

Miller pointed out that sculpting ice is much faster than chiseling stone. This results in more repetition – and that makes him a better artist, he said.

Chapelle has been crafting art out of ice at his Lawrence workshop for 12 years. He worked as a corporate and executive chef for many years before transitioning into his current vocation as a full-time ice sculptor.

This year, the Animal Care Center has been busy treating 195 hypothermic sea turtles that were rescued from Cape Cod beaches since early November. The turtles were warmed and medically treated at the center.

Many of them were flown out to other sea turtle hospitals on the East Coast. As temperatures drop, smaller sea turtles cannot usually survive, but larger loggerhead turtles have a fighting chance of survival.

“What happens is that sea turtles get stuck on Cape Cod when winter temperatures and winds move in come November,” said Connie Merigo, the aquarium’s rescue department manager. “Our partners at the Massachusetts Audubon Wellfleet Bay Wildlife Sanctuary have volunteers who walk the beaches and rescue these cold-stunned turtles. They come to our facility in Quincy where we treat them for hypothermia and sometimes pneumonia. Over the last decade, we have seen an increasing number of turtles, up from an average of 90 a year to more than 300.”