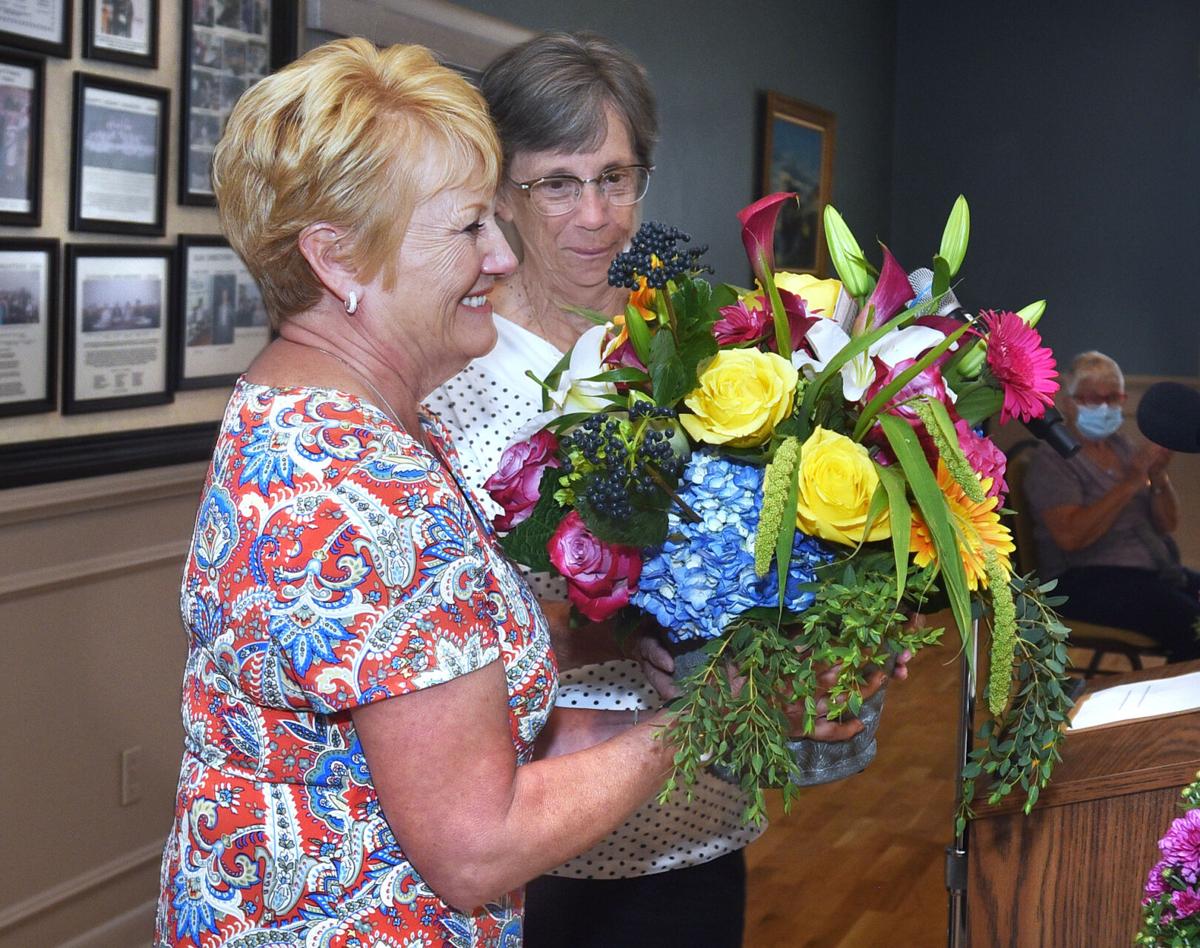 Corinne LaCharite-Johnson, left, executive director for the Department of Elder Affairs for Methuen, receives flowers from Maureen Sharrock, chairwoman for the Methuen Council on Aging, during a retirement reception. 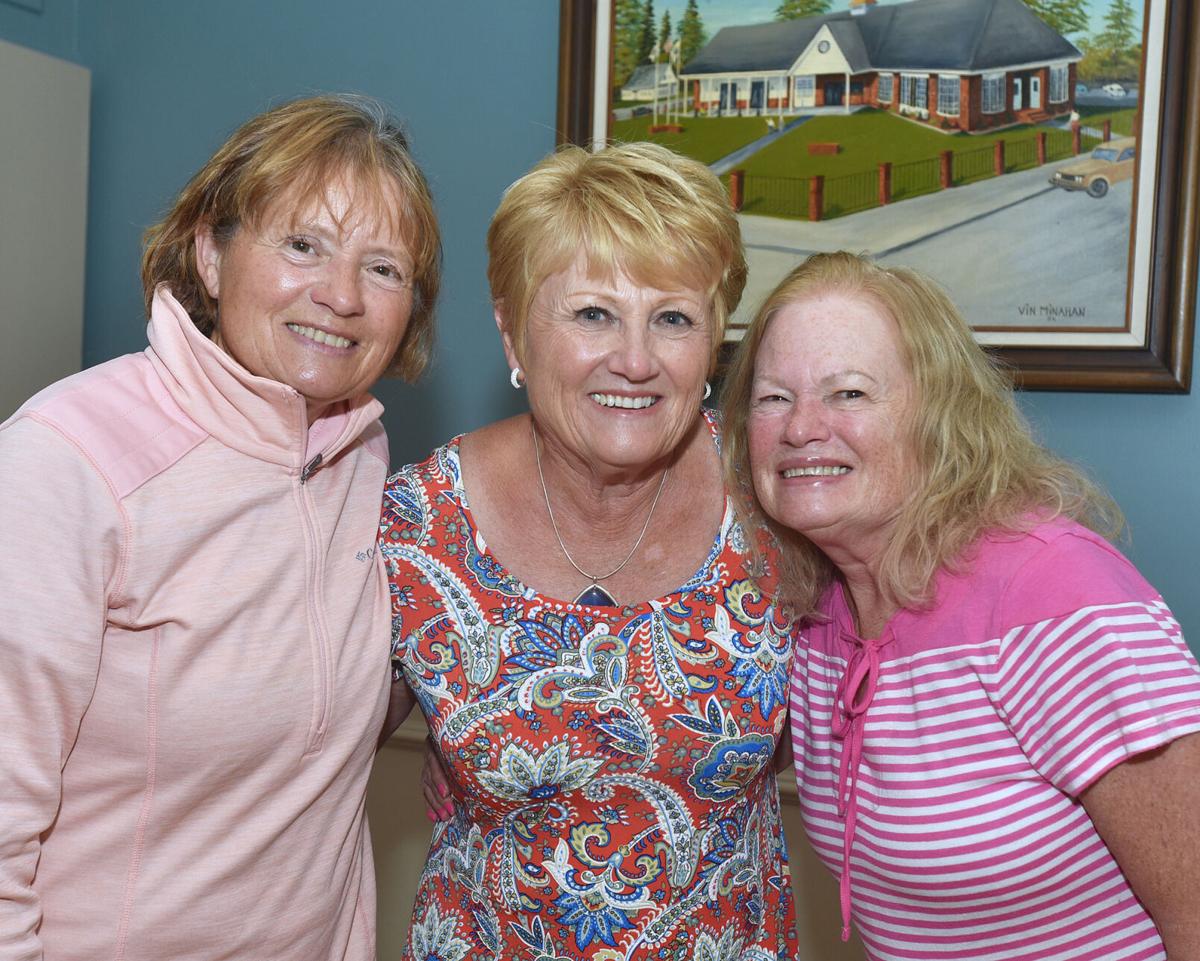 Corinne LaCharite-Johnson, center, is greeted by her sisters, Gena Winchell, left and Rachel Cieslik, at her retirement reception. 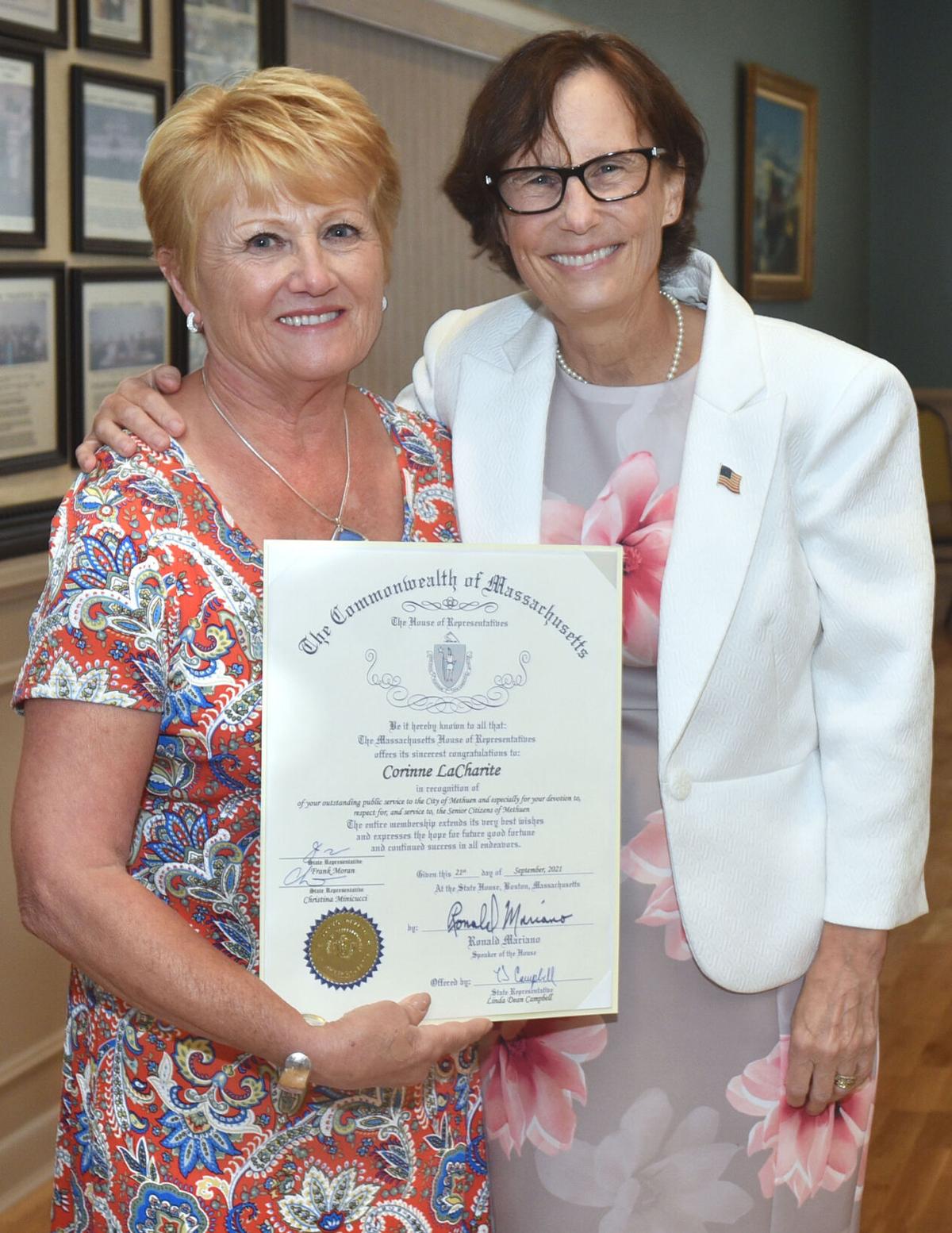 Methuen Senior Activity Center Executive Director Corinne LaCharite-Johnson, left, receives a citation from the House of Representatives from state Rep. Linda Dean Campbell to mark her 32 years of service to the community.

Corinne LaCharite-Johnson, left, executive director for the Department of Elder Affairs for Methuen, receives flowers from Maureen Sharrock, chairwoman for the Methuen Council on Aging, during a retirement reception.

Corinne LaCharite-Johnson, center, is greeted by her sisters, Gena Winchell, left and Rachel Cieslik, at her retirement reception.

Methuen Senior Activity Center Executive Director Corinne LaCharite-Johnson, left, receives a citation from the House of Representatives from state Rep. Linda Dean Campbell to mark her 32 years of service to the community.

METHUEN — For city native Corinne LaCharite-Johnson, it’s mission accomplished after serving as the executive director of the Senior Activity Center for the past 32 years.

Set to retire in mid-October, LaCharite-Johnson, 68, said she is most proud of the work she’s done to create “intergenerational programs” at the Lowell Street center.

“When I began in September 1989, a reporter from The Eagle-Tribune interviewed me and the heading for the article was ‘Life after 60: Many new beginnings,’” she remembered. “The article talked about how the director’s goal was the union of kids and seniors. Now I can say we were successful in doing that with many programs in the schools and other community groups.”

LaCharite-Johnson spoke highly of the well-received pen pal program the center runs with Methuen’s Comprehensive Grammar School (CGS) students. Fourth graders correspond with seniors over a period of several months before visiting their pals at the end of the program at the center for a pizza and bingo party, LaCharite-Johnson said.

Under LaCharite-Johnson’s direction, the Methuen Senior Activity Center received eight awards, including the Fran Pratt Award for excellence in intergenerational programs, as well as the Massachusetts R.O.S.E. Award for outstanding volunteer programming, she said.

LaCharite-Johnson said the 17,000-square-foot center — which boasts workout and game rooms, a lounge, gift and thrift shops, a clinic and the Morrissette Auditorium — was first referred to as the “Taj Mahal” of senior centers for its grand offerings after relocating from a much smaller, rented space on Broadway.

With help from the city and a motivated staff, LaCharite-Johnson went from serving 75 seniors at the start of her tenure to welcoming upwards of 400 residents through the center’s doors each day. According to LaCharite-Johnson, previous census numbers reported that there are 9,063 seniors, or residents over 60, living in Methuen, though she estimates the 2020 Census numbers to be more like 10,000.

“A lot of people have a preconceived idea of what a senior center is. They’ll say, ‘I’d never set foot in there.’ But they don’t know what it’s really like,” LaCharite-Johnson said. “The important thing in the long run is to make connections, and as you grow older it becomes harder to do. Senior centers are a great way to do that. We try to keep all of our programming low-cost so everyone can stretch their budget, develop a meaningful life and have a reason to get up in the morning.”

COVID-19 shuttered the center’s doors temporarily, but now programs, including the distribution of 300 Meals on Wheels daily, are back up and running again.

“My parents always taught me to leave things better than I found them and I’m leaving the Senior Center in good hands,” LaCharite-Johnson said, praising her small but dedicated team, which includes Administrative Assistant Linda Sheehan, among others. “I’m proud I was able to build up a department that was able to respond to the community in many different ways. No matter what problem a senior comes to us with, we try our hardest to find a solution. To develop a caring place is something I’m really proud of.”

After a brief “decompression” period, LaCharite-Johnson says she looks forward to becoming, well, an active senior.

“I’m hoping to go back to some of the things I love — I play guitar and sing — and I garden,” she said. “I look forward to getting a bike and going onto the rail trail with my friends from here (the center).”

“I was recently married on February 14 after having COVID with my now-husband and we realized how precious life is,” she explained. “We have 9 grandchildren between the two of us, ages 5 through 19, so I want to have the time to reconnect with them, pick them up from school and just have fun with them.”