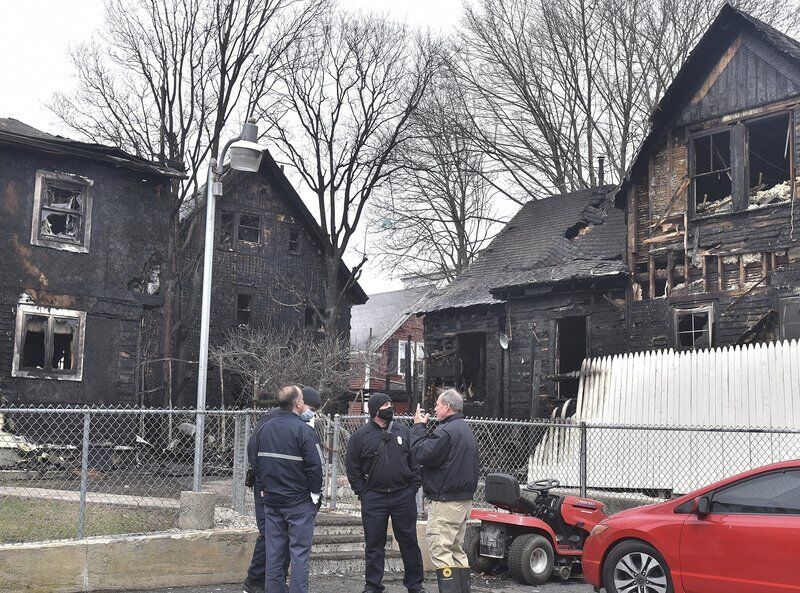 CARL RUSSO/Staff photoLawrence fire investigators, including Building Inspector David Houle, right, are surrounded by houses destroyed in Sunday's fire. The houses, from left, are 12 Saratoga St., the back of 19 Bennington St. and 14 Saratoga St. 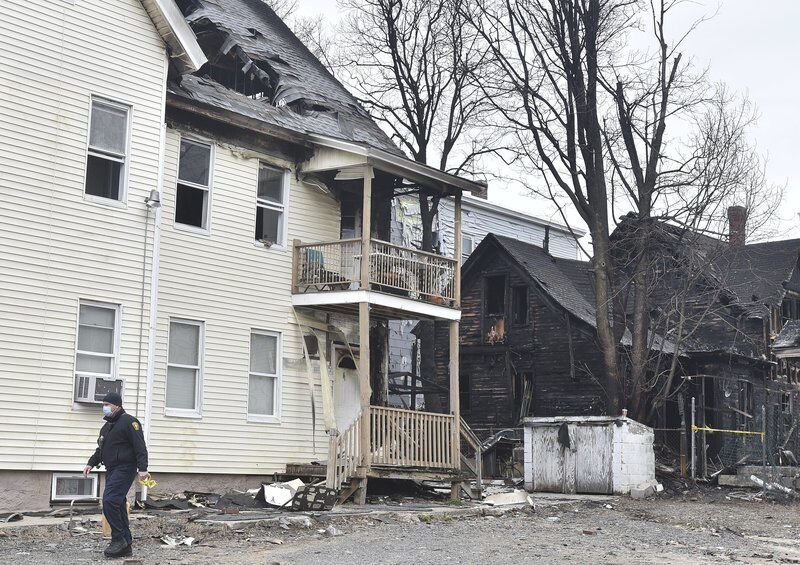 CARL RUSSO/Staff photoA Lawrence fire investigator walks past 19 Bennington St., which was heavily damaged in the Easter Sunday fire. The house to the right, 14 Saratoga St., was destroyed in the blaze.

CARL RUSSO/Staff photoLawrence fire investigators, including Building Inspector David Houle, right, are surrounded by houses destroyed in Sunday's fire. The houses, from left, are 12 Saratoga St., the back of 19 Bennington St. and 14 Saratoga St.

CARL RUSSO/Staff photoA Lawrence fire investigator walks past 19 Bennington St., which was heavily damaged in the Easter Sunday fire. The house to the right, 14 Saratoga St., was destroyed in the blaze.

LAWRENCE — Sixteen residents are out of their homes after an Easter Sunday blaze swept through a densely populated area of the city, destroying three buildings and causing more than $1 million in damage, according to local and state fire officials.

The cause of the fire that destroyed 19 Bennington St., 12 Saratoga St., and 14 Saratoga St., remains under investigation, fire Chief Brian Moriarty said Monday afternoon, less than 24 hours after 26 mutual aid companies descended on Lawrence to assist with fighting the flames.

The fire chief was among those counting his blessings — literally — in the hours after the blaze. He said things could have been much, much worse.

“We could have easily lost 20 buildings," he said, referring to how quick the flames spread. "We had a lot of problems: It was a congested area, there was a lot of wind, and people wouldn't get out of our way — they found it too interesting to come see a fire and mutual aid had to reroute to get to the fire," he said.

"People saw smoke and they drove toward it," Moriarty added. "The wind kicked up a little and it caused the fire to travel. ... It was early, but if this was 3 in the morning, this could have been a lot worse. Smoke detectors save lives."

Moriarty praised the work of Deputy Chief John McInnis, who was initially in charge of the first crew on scene around 6 p.m. Sunday.

According to a statement issued by state Fire Marshal Peter Ostroskey  — in conjunction with Moriarty, Lawrence Mayor Kendrys Vasquez and police Chief Roy Vasque — the three properties involved in the fire have been deemed a total loss.

One woman was taken to Lawrence General Hospital with unspecified injuries and released, the statement said. There were no firefighter injuries.

According to the fire marshal’s office, three other properties received heavy exterior damage to the vinyl siding but no interior damage: 16 Saratoga St., 21 Bennington St. and 23 Bennington St. A vehicle and motorcycle were also damaged during the fire, the statement said.

Damage is estimated at more than $1 million, according to the fire marshal’s office.

The cause of the fire remains under investigation by Lawrence fire and police departments with assistance from state police assigned to the fire marshal’s office.

Heal Lawrence, a nonprofit aimed at helping local fire victims get back on their feet, is collecting gift cards and monetary donations to assist families. Gift cards to Market Basket, Walmart, Target or area restaurants may be dropped off at the Lawrence Senior Center, 155 Haverhill St., with “Heal Lawrence” written on them.

Checks made payable to Heal Lawrence’s fiscal agent GLCAC are accepted by mail, with Heal Lawrence in the memo line. They may be mailed to GLCAC at 305 Essex St., Lawrence, MA 01840.