Courtesy photoSome of the dirt bikes Lawrence police have towed after their drivers were operating on city streets illegally. 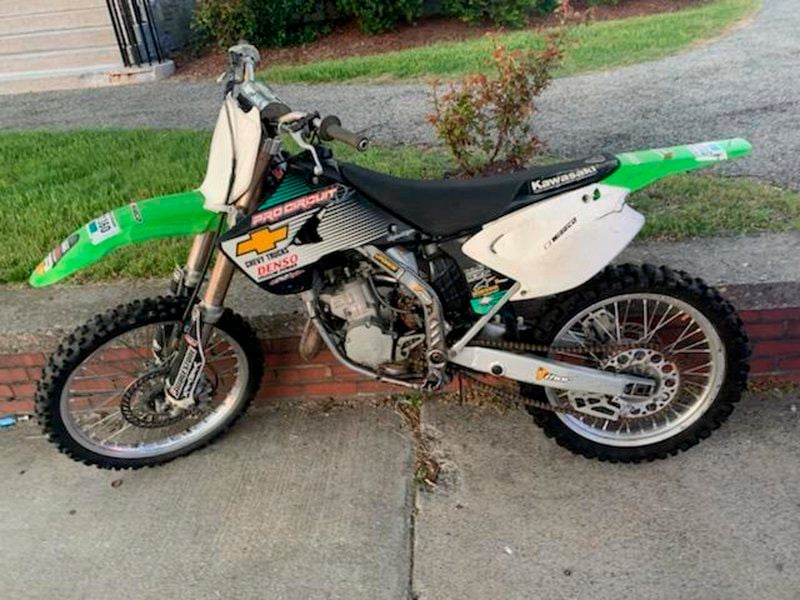 Courtesy photoSome of the dirt bikes Lawrence police have towed after their drivers were operating on city streets illegally.

LAWRENCE — Just after 10 Tuesday night, officer Carl Farrington went to the South Common for a report of a “female hollering and screaming,” according to police.

Farrington did not find the woman but he could “hear the sound of revving motorcycle engines.”

Drivers on dirt bikes, with no head lights, were “zig zagging and popping wheelies along Market Street and Osgood Street at the edge of the newly rehabbed South Common where walkers walk laps around the park day and night,” the officer wrote in a report.

Farrington said there were five bikers and he had to swerve to miss hitting them.

The arrival of warmer weather has also brought out annual complaints about loud and nuisance dirt bike drivers, according to police.

“We are trying to send the message early this year,” said police Chief Roy Vasque, noting numerous arrests were made and dirt bikes towed already this week.

“We are cracking down,” said Vasque, noting police have received complaints about dirt bike drivers “with no helmets, driving like lunatics and popping wheelies.”

Those caught with dirt bikes face criminal charges of driving without a license or registration, failure to wear a helmet, driving to endanger and reckless driving, Vasque said.

“Every time it gets warm we start getting complaints about these bikes individually and in packs,” he said.

Farrington, in his report, noted the dirt bikes he encountered “are not registered, or insured and are not legal to drive on the roadways or any city property, and intended for off highway use with permission of the land owner.”

“They do not meet the standards for safety or roadway usage,” he wrote.

After Farrington put on his blue lights and activated his siren, he said the bikers refused to stop for him. Officers at various locations nearby then reported seeing the bikes.

One Lawrence man, Alexander Martinez-Lopes, 25, of 345 Jackson St., was eventually placed under arrest for driving with a suspended license and other related charges, according to the report.

The drivers of an off road dirt bike and a scooter style bike were involved in a disturbance Wednesday night at Dracut Street and South Broadway, according to another report by Detective Charles Saindon.

Police say the dirt bike driver was not wearing a helmet. When Saindon and fellow Detective Angel Lopez tried to pull him over, though, the driver sped away, according to the report.

After a brief pursuit, Joneivy Liranzo, 25, of 86 Byron Ave., Lawrence, was placed under arrest, according to police. His dirt bike was towed by Sheehan’s of Methuen.