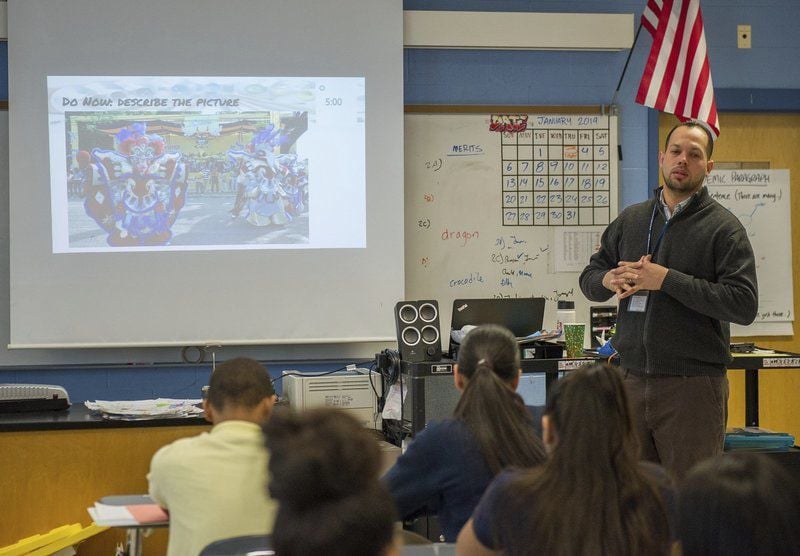 AMANDA SABGA/Staff photo Art teacher Shaddai Vargas and his students are representing Massachusetts in the Samsung Solve for Tomorrow contest. They are designing and building a prototype device to prevent high-pressure gas from reaching homes, a lesson plan based on the Merrimack Valley gas disaster. 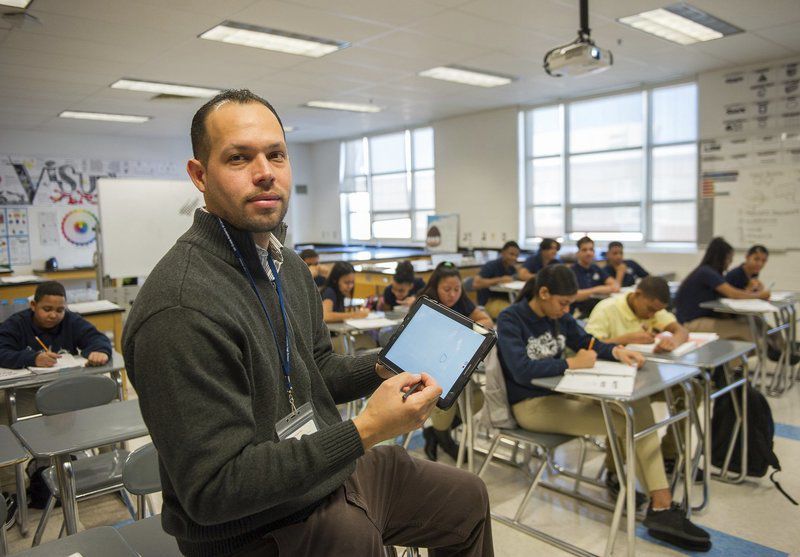 AMANDA SABGA/Staff photoArt teacher Shaddai Vargas and his students are representing Massachusetts in the Samsung Solve for Tomorrow contest. They are designing and building a prototype device to prevent high-pressure gas from reaching homes, a lesson plan based on the Merrimack Valley gas disaster.

AMANDA SABGA/Staff photo Art teacher Shaddai Vargas and his students are representing Massachusetts in the Samsung Solve for Tomorrow contest. They are designing and building a prototype device to prevent high-pressure gas from reaching homes, a lesson plan based on the Merrimack Valley gas disaster.

AMANDA SABGA/Staff photoArt teacher Shaddai Vargas and his students are representing Massachusetts in the Samsung Solve for Tomorrow contest. They are designing and building a prototype device to prevent high-pressure gas from reaching homes, a lesson plan based on the Merrimack Valley gas disaster.

LAWRENCE — For Shaddai Vargas's students, the gas explosions and fires that rocked the city Sept. 13 were difficult to comprehend.

Many of them were immigrants, mere weeks into the school year and still adjusting to life in a new country, confused and scared to see flames and destruction in the city they were beginning to call home.

“They couldn't believe it at the beginning. They didn't understand what was happening,” Vargas said. “They wanted to go back to their country.”

Vargas, an art teacher at Lawrence High School, came up with a project to help his students understand how over-pressurized gas lines could cause homes to catch fire — and how to potentially prevent it from happening again.

He submitted his idea to the Samsung Solve for Tomorrow contest, a nationwide competition designed to pique students' interest in science, technology, engineering and math (STEM) through projects that help local communities.

After being selected as one of five Massachusetts finalists in November, Vargas recently learned his project was selected as the state winner. So far he's won a Samsung tablet for being a state finalist, $20,000 for classroom technology for being a state winner, and the chance to compete for the national prize — $50,000 in Samsung technology and classroom resources for finalists and $100,000 for the ultimate winner.

“It feels awesome,” Vargas said. “It's a big responsibility, representing the state. I'm going to do my best to make it happen.”

Vargas teaches in the high school's Engaging Newcomers in Language and Content Education (ENLACE) program, a transitional program that serves teens in ninth- and 10th-grades who are new to the country and still learning English.

After the gas fires, Vargas said his students experienced a mix of emotions — sadness at losing 18-year-old Leonel Rondon, discomfort sleeping in their homes.

From classroom conversations about the disaster, he developed a project in which students will build a prototype of a safety device that could prevent future gas explosions by preventing high-pressure gas from reaching residences. Along the way they'll learn about the use of natural gas as fuel, the region's aging pipeline system — among the oldest in the country — and the risks and safety precautions of using natural gas.

While the project is still in the idea development phase now — so far, Vargas has only had to submit written proposals for the Samsung contest — students will soon be designing and building their prototype device and test house with the aid of a 3D printer acquired with the help of donations. They'll also produce a video that documents their progress and disseminates gas safety information, which will be submitted to Samsung for the next phase of the contest.

Student leaders will be in charge of various aspects of the project, including animation, media, and research and development. Among them is 15-year-old Luis Angel Paulino, a ninth-grader from the Dominican Republic, who taught himself stop-motion animation through a cell phone application. He deftly animated a stick figure Vargas's tablet, a sample of what's to come with their project.

Vargas hopes to bring in Columbia Gas representatives to talk to his students about pipeline and gas safety. He also wants the company to test the students' prototype at their facilities. Should they be selected as one of the national finalists, Vargas and his students will be invited to demonstrate their prototype to a panel of judges.

The project goes beyond just teaching students about the causes and effects of a gas explosion, however. By connecting technology and artistic representation with problem-solving skills, Vargas is introducing students to careers in fields related to science and technology.

“They don't know what those chances are, they don't know the importance of math and science in solving problems for the community,” Vargas said.

Part of the ENLACE program is teaching new students to be agents for change in their community, said Principal Allison Balter. This project gives them a “tangible way to impact the community,” she said, noting that the students are “already really excited and engaged” in the concept.

In the project description he submitted to Samsung, Vargas said the students' efforts would help “empower local students and their families for a safer Merrimack Valley.”

Vargas said the project helps students understand “they can be part of the solution, too.”