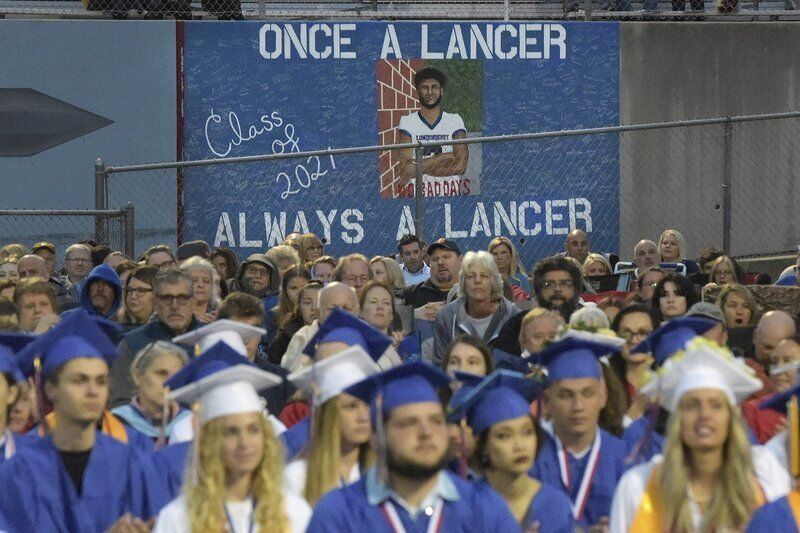 TIM JEAN/Staff photoLondonderry graduates sit near a mural honoring their classmate Jake Naar, who died during the school year. 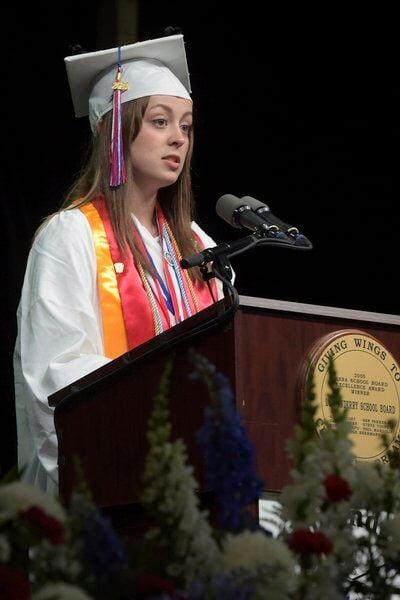 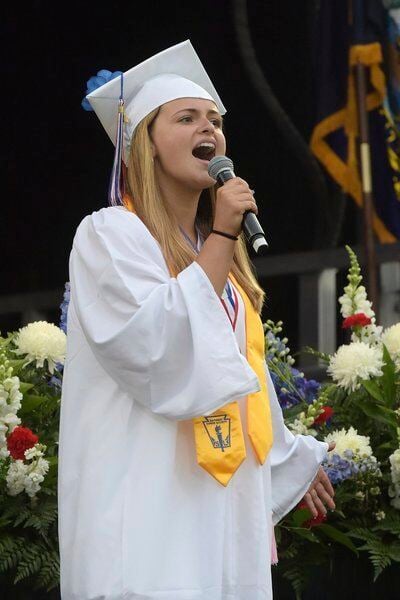 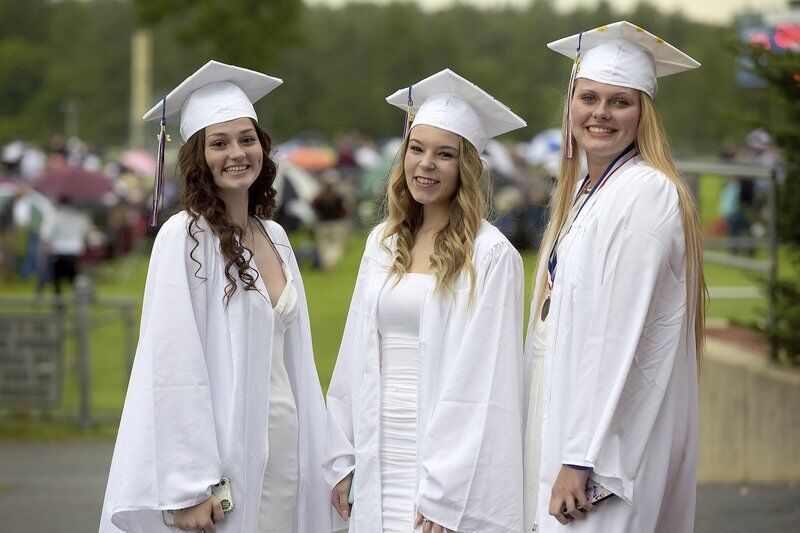 From left, Guinevere Gilchrist, Emily Moran, and Alexis Meola pause for a photograph before the start of their graduation from Londonderry High School.

TIM JEAN/Staff photoLondonderry graduates sit near a mural honoring their classmate Jake Naar, who died during the school year.

From left, Guinevere Gilchrist, Emily Moran, and Alexis Meola pause for a photograph before the start of their graduation from Londonderry High School.

LONDONDERRY —The Londonderry High School class of 2021 has a lot to celebrate.

Those were the words from students and administrators speaking at the high school’s 42nd annual commencement ceremony Friday night, highlighting the challenges of the past year, along with successes and students’ drive to persevere, adapt, show kindness and look to the future.

Diplomas were awarded to 333 students in Londonderry High’s “Lancer Nation,” with the ceremony held on the school’s football field.

Londonderry High Principal Jason Parent offered a welcome and said this class was to be commended for its strength through some tough times, while keeping focus on friendships, academics, and a will to make the senior year something special.

Parent also credited the many accomplishments of this class. Twenty percent of the class excelled with a cumulative weighted grade point average of 4.0 or higher. There were also 249 members of the class of 2021 named New Hampshire Scholars and $137,738 awarded in scholarships.

The principal also read a long list of successes from athletics, to performance, music, and community service.

Valedictorian and class president Madison Walden, the first female student in Londonderry High history to hold both honors, offered a tribute to her classmate Jacob Naar, who died in March in a car crash. Walden said the teen embodied all good things as a high school athlete student and friend.

“Jake was someone who took all the bad so many of us had to pour out into our high school experiences and made it all something we should have seen all along,” Walden said. “He was someone who had that effect on people.”

Walden encouraged the class to take all that high school gave them and move on to whatever path they choose and to always have hope.

“Twenty years from now if you feel you haven’t accomplished a whole lot, I urge your future selves to think back to this group of students and what they represent,” she said. “So, if nothing else, you will forever know that you were one of the individuals who made up this monumentally beautiful whole.”

Salutatorian Caden Elghazal spoke of his high school times and felt graduation night hadn’t quite hit him yet.

He thanked many people on his journey, including teachers, administrators, coaches, family, and friends.

“I think we can all agree that this past year has been wild,” Elghazal said.

Elghazal also paid tribute to Naar and also remembered the memory of a beloved school counselor, Kate Sherwood, who died in February.

“They were both loved and cared for by all and they will always be a part of us,” he said. “The love from the entire Londonderry community after both of those tragic events, combined with the stress and struggle that COVID had already been putting us through, made us all closer together than ever before. It showed us that we aren’t just the class of 2021, we are the family of 2021.”

Naar’s memory radiated throughout the ceremony.

An honorary diploma was awarded posthumously to Naar and accepted by Londonderry High School Assistant Principal Katie Sullivan. A nearby painted image along a concrete wall stating “Once a Lancer, Always a Lancer,” along with Naar’s image was signed by every member of the graduating class.

The second seat within the graduating class also remained empty to honor Naar’s memory, and as a symbol of his athletic jersey #2.

Parent told the graduates they were a kind and compassionate group of young men and women and embodied all the positive traits that make a high school class special.

“You all shined in this year’s darkest moments,” Parent said. “You were resilient, you were united and you stuck together,”

Earlier on Friday, graduating seniors participated in a longstanding tradition in the school district and headed back to their elementary schools for a breakfast and to meet with past teachers and say one last goodbye to their school years.