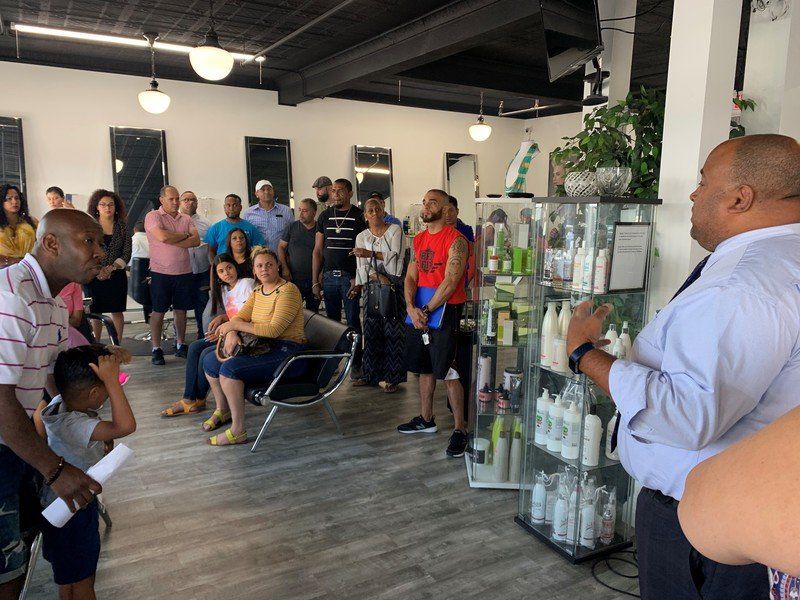 Bill Kirk/staff photoMayor Dan Rivera speaks to a group of business owners at a South Broadway hair salon about measures the city is taking to help them in the wake of the ongoing fallout from the Sept. 13 gas explosions. 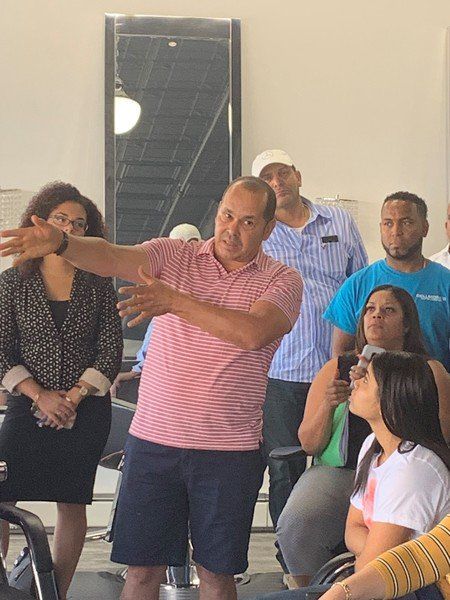 Bill Kirk photoAntonio Amable Batista, owner of Amable Supermarket on South Union Street, makes a point during Friday's meeting with the mayor at a hair salon on South Broadway.

Bill Kirk/staff photoMayor Dan Rivera speaks to a group of business owners at a South Broadway hair salon about measures the city is taking to help them in the wake of the ongoing fallout from the Sept. 13 gas explosions.

Bill Kirk photoAntonio Amable Batista, owner of Amable Supermarket on South Union Street, makes a point during Friday's meeting with the mayor at a hair salon on South Broadway.

LAWRENCE — A group of disgruntled South Lawrence business owners packed into a hair salon on South Broadway Friday afternoon, asking Mayor Dan Rivera how they can recoup their losses from the ongoing impact of the Sept. 13, 2018 natural gas explosions and fires.

Rivera arrived at the 1 p.m. meeting at Lucia's Beauty Spa, 81 So. Broadway, armed with answers — and money.

Rivera announced a four-part plan, which includes paying up to three, $3,000 installments for rent or mortgage payments (in addition to money that's already been paid for rent and mortgages), a TV ad campaign, a marketing brochure mailing in Spanish and English, and, finally, a consumer incentive program entitled Shop.Share.Win.

The meeting, organized by business owners in South Lawrence in conjunction with E for All and the mayor's office, was billed as an opportunity to vent frustrations as well as a chance to learn more about how businesses can get compensated for continued losses.

One of the biggest questions was how business owners could be added to the recently announced $143 million class action suit that is restricted to homeowners. Rivera vowed to intervene on behalf of the businesses so that the judge doling out the money understands the impact the disaster has had on business owners, too.

Finally, many people asked the mayor about their claims with Columbia Gas, noting that in some cases the company was closing them unilaterally, something Rivera warned against.

"They don't have a formula (for closing claims) because they want to give out the least amount of money possible," Rivera said. "Keep your claim open. If you keep your claim open, the more they will pay out. The moment you close the case, it's all over."

'Going out of business'

For some at Friday's meeting, it's almost "all over" already.

John Farrington, owner of Carlene's Coffee Shop at 209 South Broadway, was blunt about how the disaster continues to affect him.

"I'm going out of business," he said, noting that he was closed from September, when the gas explosions hit, "until Jan. 15." He struggled through the winter, then all spring the roads were being worked on. That work is just now finishing up.

"I've got a lot of new, good equipment," he said. "But I'm coming up on a year of people not being able to get to my place."

He said E for All offered to put banners up saying he was open, "but that's not paying the bills."

Farrington said what he really needs are big, permanent signs over his business, "but they say I'm asking too much. I'm a good friend of Dan's (Rivera) but it's frustrating. I'm just trying to get my clientele base back. My old clients have gone elsewhere. ... But I hear we have a Starbucks though."

Leonidas Garcia of Evolution Beauty Supply, 160 Winthrop Ave., said she was shut down for four months.

"I lost my employees, I lost my clients, and the area around my business is dead," she said.

Antonio Amable Batista, owner of Amable Supermarket on South Union Street, told the mayor his business was seriously damaged and he continues to struggle.

"South Union Street was closed for months, my kitchen was destroyed, my customers moved north, and there was no way to get to my store," he said. Making matters worse is that Columbia Gas recently announced a $143 million class action lawsuit that he, as a business owner, isn't allowed to participate in or benefit from.

He noted, however, that insurance companies are telling businesses to join the class action suit anyway, just in case their claims get closed by Columbia Gas.

Rivera, speaking to the business owners, said the city was trying to help on several levels.

"We may never get back to where we were before the explosions," Rivera told the group. "So many people were impacted. But we have to move on."

To help in that move, he said, every business affected by the explosions and fires — 479 to be exact — would be eligible for a $3,000 check to make back-rent or late-mortgage payments.

Rivera explained that the program, being run by Mill Cities Community Investments, is simple.

He said that once businesses receive the registered letter, all they have to do is fill out an application, and a check would be cut for $3,000.

"The bar to get the money is thorough but not rigorous," he said.

The money is coming from the $2 million Columbia Gas gave to the city in December 2018.

Rivera said a second round of payments may be made, once the city sees how much money is left from the first round of $3,000 payments. If there's still money left after the second round, a third round of checks will be doled out for rental or mortgage assistance, he announced.

The mayor said the city has also purchased cable TV air time, and would be running a series of advertisements on Spanish TV telling people to "come back and shop in South Lawrence."

He said the ads would run three to four times a day during the week and on Saturdays.

"Their frustration is real and we don't want to make it worse," he said. "But I think people left here happier than when they came in."