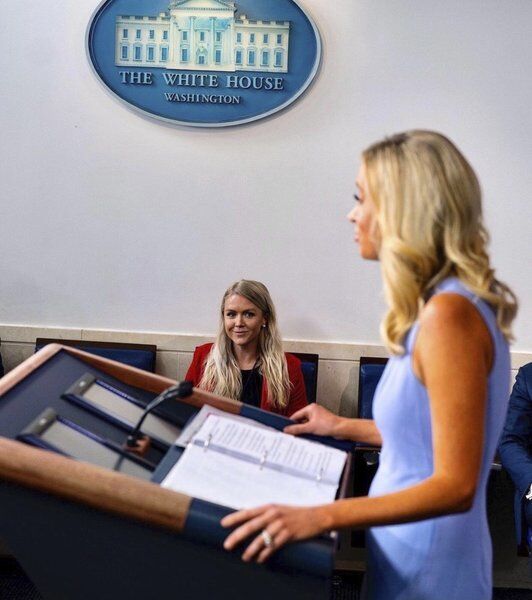 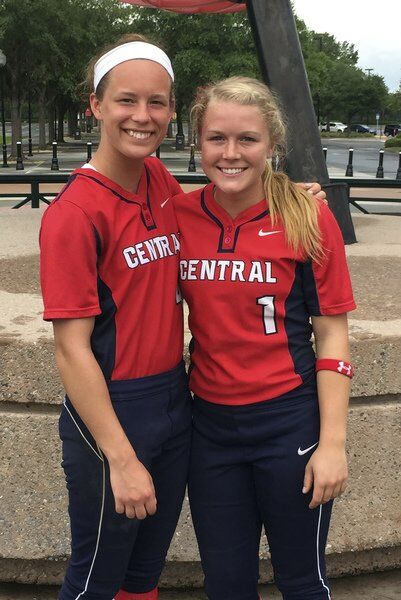 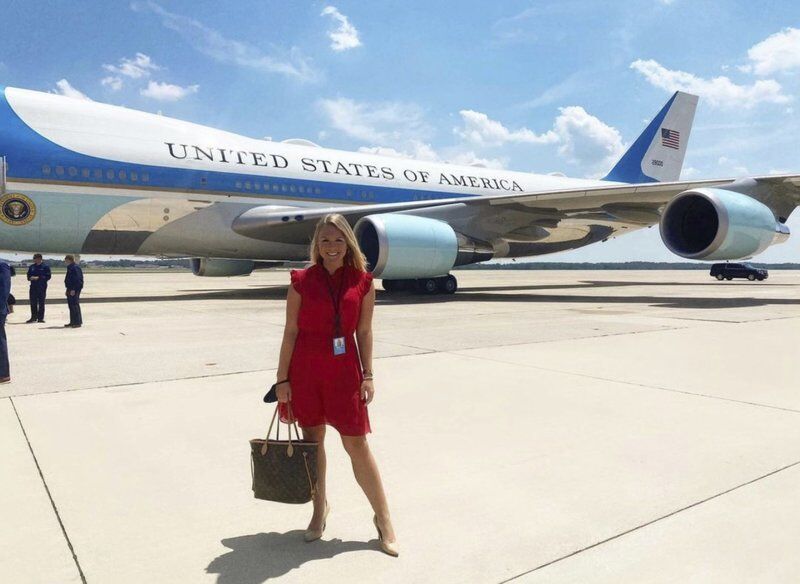 Courtesy photo. Karoline Leavitt, an Atkinson native, poses in front of Air Force One during a recent trip. She is an assistant press secretary to President Donald Trump. At Central Catholic, she was a star softball player. 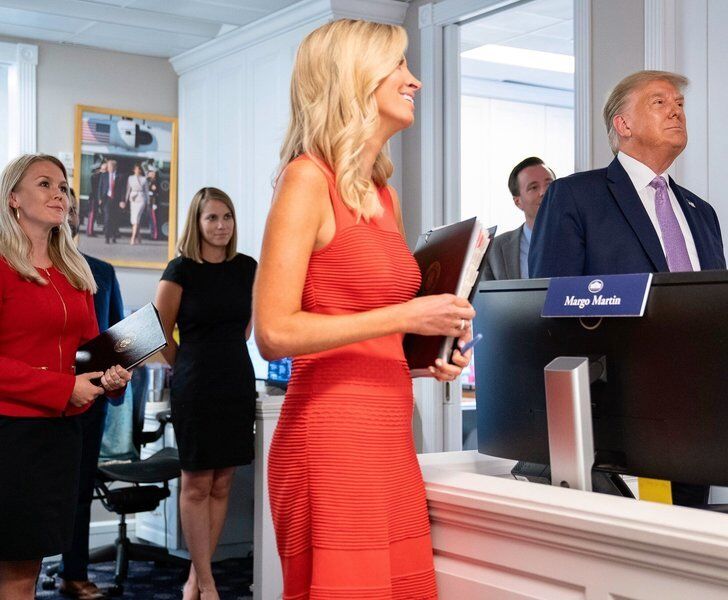 Courtesy photo. Karoline Leavitt, an Atkinson native, poses in front of Air Force One during a recent trip. She is an assistant press secretary to President Donald Trump. At Central Catholic, she was a star softball player.

White House Press Secretary Kayleigh McEnany was commending a co-worker who is relatively new to the difficult Washington, D.C. divide.

She pointed to this person’s competitive nature and ability to adjust quickly in the current political climate.

“Being tough is imperative to succeeding in a fast-pace West Wing environment, especially in a role where you are interacting with press,” she said.

McEnany was expressing her confidence in one of her top underlings, Atkinson native and former Central Catholic softball star Karoline Leavitt.

At age 23, Leavitt is one of three assistant press secretaries who report to McEnany.

“I grew up very interested in politics and the media. It was in my blood,” Leavitt said. “The fact that New Hampshire hosts the first-in-the-country presidential primary and the candidates have always come there probably played a role in my passion.”

Despite that political enthusiasm, Leavitt, a 2014 and 2015 Eagle-Tribune All-Star, originally expected to take her softball exploits to another level at St. Anselm College. But two years in, she gave up her sport because it was getting in the way of her academics and internship at WMUR in Manchester, she said.

Early in her junior year she looked into internship opportunities in Washington, D.C. and noticed an opening as a writer in the presidential correspondence office. The job involved writing "thank you" notes, commendations and letters to the public on behalf of the president on White House letterhead.

She knew it was a long-shot, but she decided to apply, worked diligently on the half-dozen required essays and resume, and submitted them without great expectations.

“I had never even been to Washington, D.C. before,” the young Republican said. “Then I get a call that I was chosen. I was stunned.”

That summer internship went so well that she was offered a full-time job upon graduation in 2019 in the Presidential Correspondence Office.

Then in April of this year, another opportunity arose when McEnany, a Republican political commentator and author, was chosen to replace Sarah Sanders as White House press secretary.

“I always I knew wanted to move over to the (White House) Press Office,” Leavitt said. “When Kayleigh was hired, I knew who she was and I heard she would be bringing in her new team, hiring assistants. A mutual friend got my resume to her and the next day I got an interview.”

Leavitt, who at Central Catholic was noted for her clutch hits as a softball player, said she has never been more nervous than she was going into her meeting with McEnany.

“I usually don’t get nervous in interviews, but I was visibly shaking and almost blacked out,” Leavitt said. “I’ve been nervous in games before, but this was different. This was the Kayleigh McEnany and the White House.”

The following day, McEnany offered her the job. And eight months later, Leavitt said she's living — and working — her dream.

"My role is being the first line of defense with Kayleigh," Leavitt said. "I'm there to answer questions, play defense. It's not an easy job. The reporters are demanding, which is understandable. The questions come all day — calls, emails, statements ... whatever."

Leavitt’s desk is the first thing press members seen when they enter the White House Press Office. She tackles questions every day from some media heavy hitters — people like CNN’s Jim Acosta and NBC’s Kristen Welker. These are questions she takes to McEnany.

“We have a good relationship with the media,” Leavitt said. “Most of them are nice, respectful people. It doesn’t always come off that way on TV or in the newspapers.”

Leavitt has been to many meetings with President Donald Trump in attendance and has even had a few conversations with him.

“He’s very easy to talk to,” she said of these experiences.

For McEnany's part, she said she wasn’t surprised to learn Leavitt comes from a sports family with two brothers — Joe, a golfer, and Mike, who plays football — who were all-stars in high school and college.

Leavitt, who traveled home for Thanksgiving, cites the influence of her parents and brothers when reflecting on making it to Washington, D.C. — and thriving there.

"My dad (Bob) played a huge role in my life,” she said. “My dad came from nothing and worked his way up, created a successful business that my brothers now work at. He didn’t take any handouts from anyone. He reminds me of President Trump. He says what he believes.”

As for Leavitt’s future in media, it won’t end on Jan. 20 when President-elect Joe Biden officially takes the reins from Trump. She is weighing options while finishing out the next six-plus weeks under Trump's administration.

“Karoline has a bright future in media, politics, or whatever field she chooses," McEnany said. "She is a standout talent on the press staff and has exceeded any and all expectations."

You can email Bill Burt at bburt@eagletribune.com