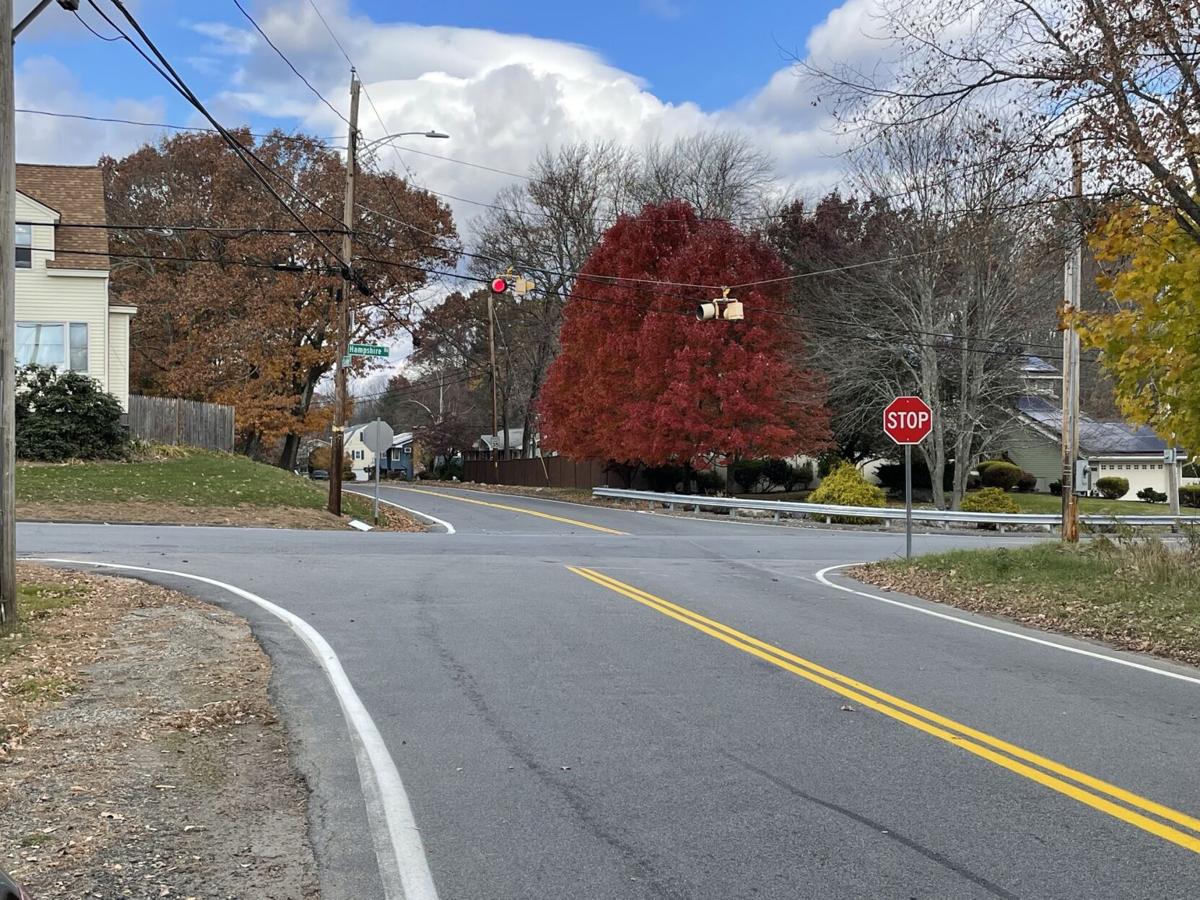 The Methuen City Council is set to consider a citizen request for a four-way stop sign and four-way red flashing lights at the intersection of Hampshire Road and Salem Street. 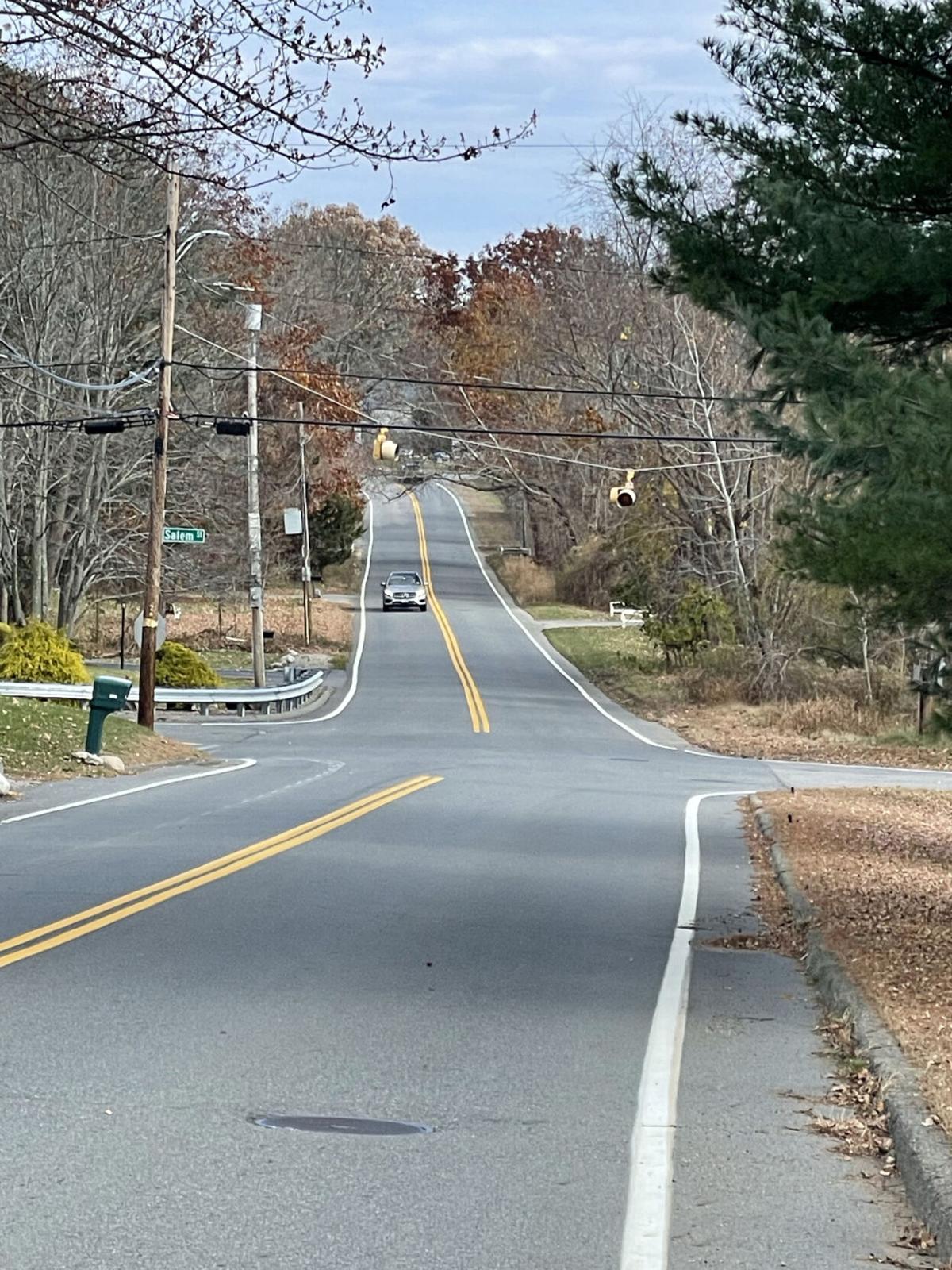 A motorist travels down a stretch of road Laura Levesque wants reconfigured to make safer for all drivers.

The Methuen City Council is set to consider a citizen request for a four-way stop sign and four-way red flashing lights at the intersection of Hampshire Road and Salem Street.

A motorist travels down a stretch of road Laura Levesque wants reconfigured to make safer for all drivers.

METHUEN — After 23 years of living near the intersection of Hampshire Road and Salem Street — witnessing numerous crashes and two fatalities — Laura Levesque had finally had enough.

Last spring, she was driving with her dog in the backseat when she got an idea — unfortunately it took a near-miss accident for that idea to come to fruition.

Levesque said she was driving down Hampshire Road when a fellow driver drove through a stop sign, nearly T-boning her. After she slammed on her brakes and comforted her Labradoodle, Levesque went home and turned on her computer to draft an email requesting that city officials take another look at that dangerous intersection — for her sake and the sake of her neighbors.

Since that day last spring, Levesque followed up monthly with numerous city officials — including representatives from the mayor’s office, Department of Public Works and Police Department — and wouldn’t back down. She sent pictures and personal stories.

“When there were tire marks on the road and my dog flew from the backseat into the front, that’s what made me start this,” Levesque said. “I said, ‘I just can’t take it: I have to do something.’ It was the third time I’ve been almost hit or killed.”

As Levesque explained, the heavily traveled location is in a residential area and carries a speed limit of 35 mph. Visibility is often an issue, she said.

“On Hampshire Road, people don’t do 35. They’ll do 40, 45, or 50 and will constantly speed,” she explained. “If someone has done a rolling stop or has stopped and gone into the middle of the road a little, that’s what causes an accident.”

Two fatal crashes have happened since her family has lived in the area, with Levesque aware of at least seven crashes in the last year alone. Traffic signals and other signage has improved after the deaths, Levesque said, but not to her satisfaction.

“After the first fatality, they put up a blinking yellow light. Years went by and there were more accidents. Then a blinking red went up,” she said. There are also two stop signs at the intersection.

Levesque said she used the assistance of her West District Councilor Mike Simard, who also chairs the city’s Public Safety Subcommittee, to shepherd her requests along.

Earlier this month, councilors were made aware that the Police Department and the city, through its independent engineering consultant TEC, recommended the installation of a four-way stop sign and four-way red flashing lights at the intersection. The traffic mitigation measures will supersede and replace what exists there, Capt. Randy Haggar said in a letter to Chief Scott McNamara.

“Crash history indicates a safety concern that can be addressed with the change of intersection control,” Haggar wrote in his letter. “The presence of an all-way stop-control would be expected to reduce the potential and severity for angle type crashes at the intersection.”

The City Council must formally approve the change and is expected to take up the issue during a public hearing on Monday at 6:30 p.m. in the Searles Building of City Hall, 41 Pleasant St. The hearing takes place immediately before the regularly scheduled 7 p.m. City Council meeting.

Simard thanked Levesque for bringing the matter to his attention and for not giving up for the sake of the city.

“I share her frustration because there are some flaws in the traffic and safety review processes and hopefully we as a city can review them to identify the more serious traffic issues that threaten public safety,” Simard said. “I’m grateful to Chief McNamara for recognizing that this is an important quality of life concern and for bringing this request before the council. He fast-tracked the request and rightfully so.”

Levesque is equally grateful to have played a part in the solution.

“If I can save one more person’s day from being ruined (by a crash), or potentially a death or injury, I can put my head on the pillow at night feeling a little better,” she said. “That could be me or someone I know.”

“I share her frustration because there are some flaws in the traffic and safety review processes and hopefully we as a city can review them to identify the more serious traffic issues that threaten public safety,” — City Councilor Mike Semard