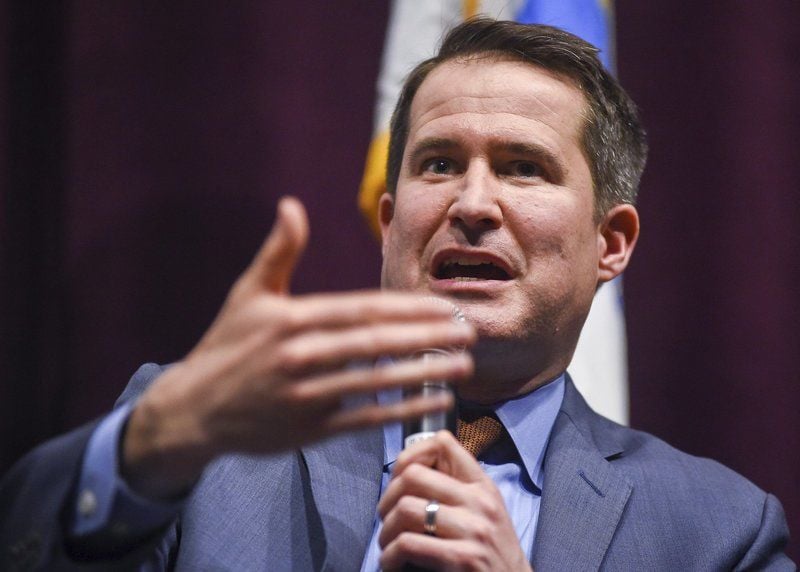 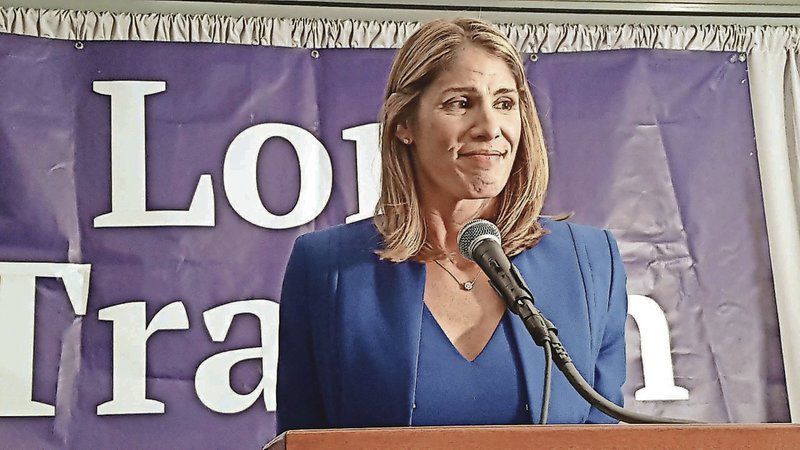 FILE--In this Sept. 4, 2018 file photo, Congressional candidate Lori Trahan speaks to supporters in Lowell, Mass. Following a recount, Trahan on Monday, Sept. 17, 2018, was declared the winner of a razor-close Democratic congressional primary in Massachusetts. Dan Koh, who finished second in the 10-candidate primary on Sept. 4, conceded defeat as the recount in the 37 cities and towns in Massachusetts' 3rd Congressional District came to a close, with Trahan appearing to add slightly to her narrow margin of victory. (Julia Malakie/The Lowell Sun via AP, File)

FILE--In this Sept. 4, 2018 file photo, Congressional candidate Lori Trahan speaks to supporters in Lowell, Mass. Following a recount, Trahan on Monday, Sept. 17, 2018, was declared the winner of a razor-close Democratic congressional primary in Massachusetts. Dan Koh, who finished second in the 10-candidate primary on Sept. 4, conceded defeat as the recount in the 37 cities and towns in Massachusetts' 3rd Congressional District came to a close, with Trahan appearing to add slightly to her narrow margin of victory. (Julia Malakie/The Lowell Sun via AP, File)

WASHINGTON, D.C. — Merrimack Valley legislators reminded their colleagues Tuesday of the Sept. 13, 2018 gas explosions still impacting locals seven months later and the immediate action needed to ensure history does not repeat itself anywhere in the country.

The time to act, Moulton and Trahan agreed, is now, as the committee considers the re-authorization of the Natural Gas Pipeline Safety Act for the first time since 2016.

The purpose of Tuesday's hearing was to consider the status of safety rules previously mandated by Congress, as well as to examine the safety of the nation's pipeline systems and response to mishaps. After Moulton and Trahan made their remarks, testimony was given by the Pipeline and Hazardous Materials Safety Administration and the National Transportation Safety Board, among others.

In his prepared speech, Moulton, a veteran legislator, compared the cascade of sudden explosions that rocked Andover, North Andover and Lawrence last fall to war scenes he witnessed overseas.

"Workers for Columbia Gas replacing a system of 100-year-old cast-iron pipes failed to account for a pressure sensor," he said. "The lines were over-pressurized and set off a series of disasters that brought carnage I thought I had left behind in Iraq."

He said 30,000 people in the Merrimack Valley became temporary refugees. Just shy of 8,000 people were told they could not go home for many months, 2,683 children among them. As of March, he said, 10 families remained in temporary housing and some small businesses were at risk of closing down permanently, unable to bounce back from the blow of months without gas.

Trahan said in her speech, "This never should have happened."

But since the explosions, she said, she has met with victims and heard stories of courage and commitment.

"One local hero, police Officer Ivan Soto, learned his home was on fire," she told the committee. "Once he knew his family was safe, he returned to duty."

She described similar heroic efforts from others and continued camaraderie among residents and business owners as they rebuild and regained strength.

But, she said, "There is no replacing some of what was lost."

Trahan was referencing Lawrence resident Leonel Rondon, 18, who was killed in a parked car by a collapsed chimney just after earning his driver's license.

"I invite any of the members of the committee to come to the Merrimack Valley and see the damage for yourself," she said. "And also meet those who suffered losses, as well as those who came to the rescue."

She implored committee members to approve a strong re-authorization of the Natural Gas Pipeline Safety Act.

"I stand ready to work with you on legislation to prevent such a disaster from happening again," she said.

Moulton spoke of a similar willingness to help, as well as widespread heroism from everyone except the company that caused the explosion.

"Columbia Gas dawdled in the moments and days immediately after this tragedy," he said. "When I asked their president why, during a Senate committee hearing, he assured me that public safety was one of the company's core values. But shortly thereafter, we learned the truth from a courageous whistle-blower who retired three months prior."

Moulton said the retiree tried to warn senior management of a looming disaster after a series of Columbia Gas missteps: less staff monitoring gas pressure in the Merrimack Valley; no longer requiring technicians to be on construction sites to monitor gas lines; and relying on a field engineer with limited knowledge of regulating sensor lines.

"Let's eliminate professional engineer license exceptions for public utility work," Moulton said. "Let's make sure a professional engineer approves all public utility engineering drawings. Let's hold state and federal regulators accountable for sufficient staffing. Let's explore the lack of oversight by the Pipeline and Hazardous Material Safety Administration, which gave the Massachusetts system a 97.4 rating out of 100 just one month before the explosions."

He urged the committee also to "make the regulation of pipeline replacement mandatory, and rethink how the administration could be more efficient as it weighs costs and benefits of new regulations."

"Because no cost is greater than that of young Americans," he said, referencing the death of Rondon. "Let's do it for (the) Merrimack (Valley). Let's do it together and let's do it now."