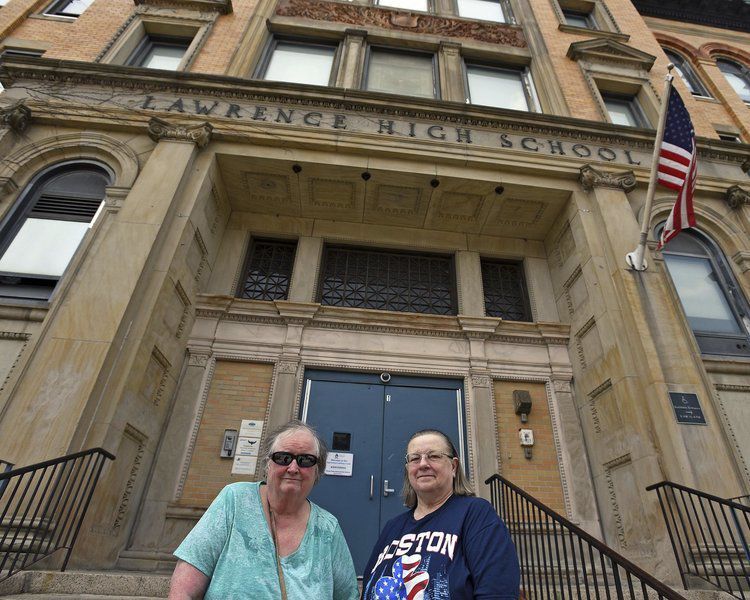 RYAN HUTTON/Staff photosLawrence Public Library archivist Louise Sandberg, left, and fellow librarian Maryann Kaslow stand in front of the old Lawrence High School on Lawrence Street. They, along with other volunteers, have compiled a list of Lawrence High School graduates, dating back to when it was founded. 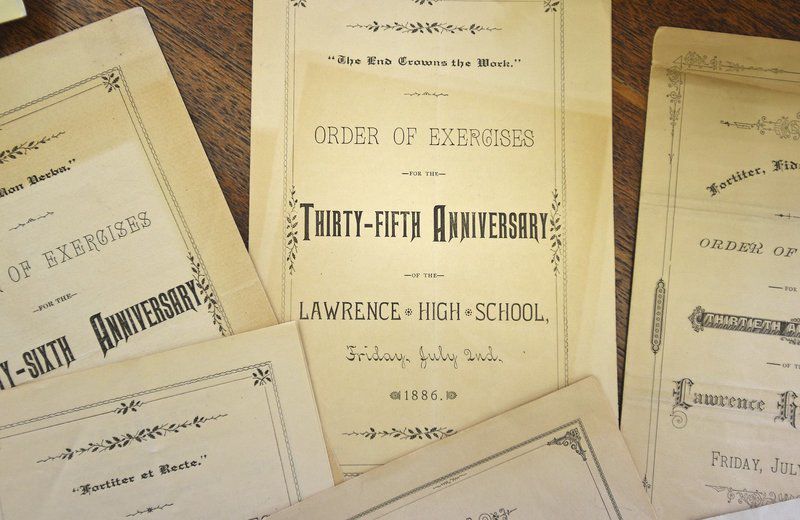 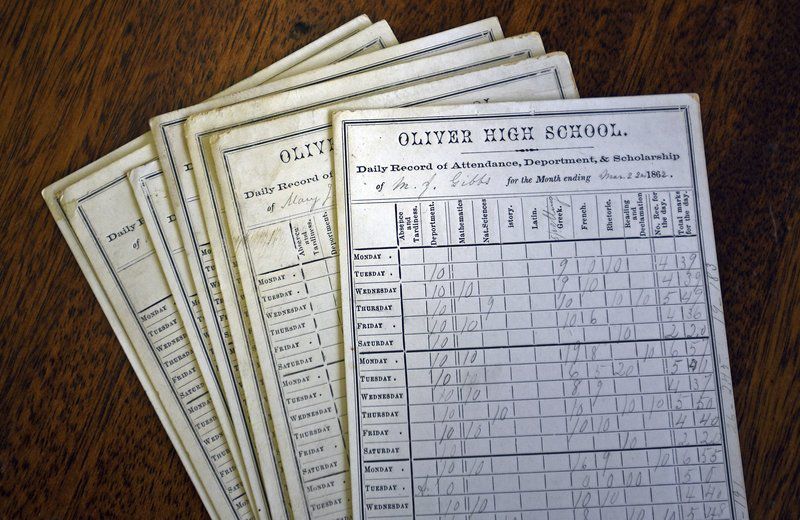 A stack of attendance records from one Mary J. Gibbs for the 1862 school year at Lawrence High School. 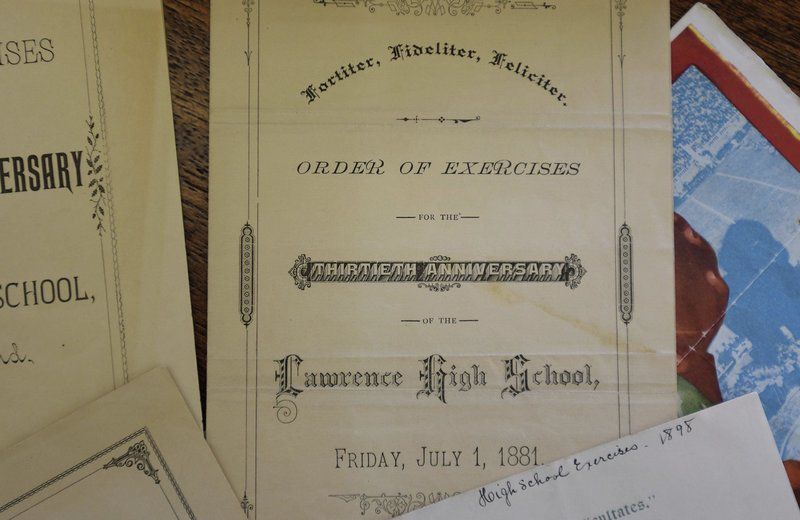 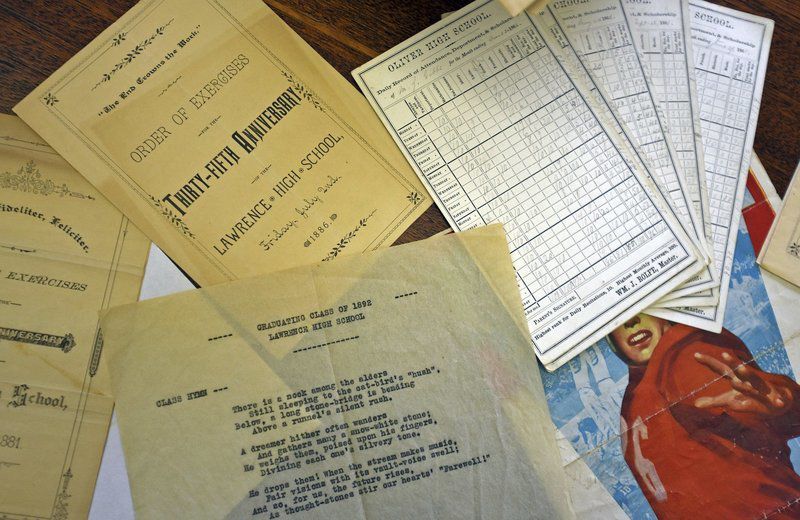 RYAN HUTTON/Staff photoAttendance slips, graduation programs, commencement announcements and football flyers from Lawrence High Scholl, all from as far back as the 1880s. 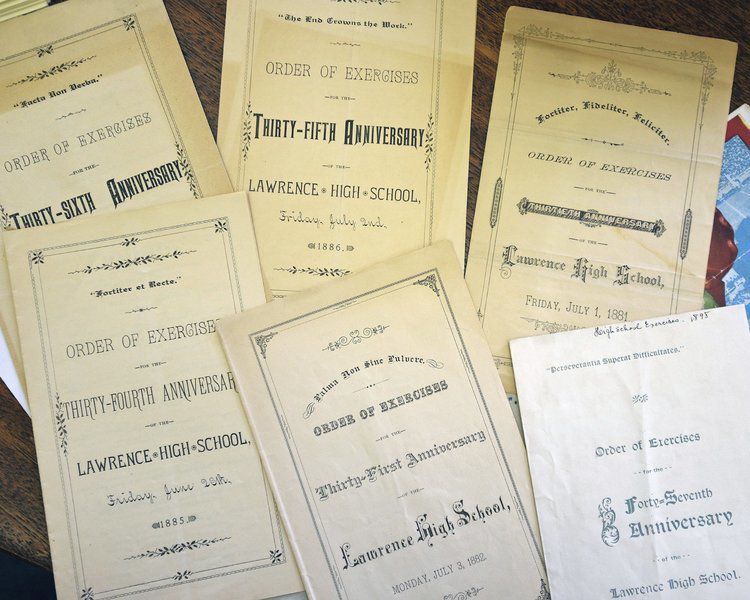 A collection of programs from Lawrence High School commencement ceremonies from the 1880s.

RYAN HUTTON/Staff photosLawrence Public Library archivist Louise Sandberg, left, and fellow librarian Maryann Kaslow stand in front of the old Lawrence High School on Lawrence Street. They, along with other volunteers, have compiled a list of Lawrence High School graduates, dating back to when it was founded.

A stack of attendance records from one Mary J. Gibbs for the 1862 school year at Lawrence High School.

RYAN HUTTON/Staff photoAttendance slips, graduation programs, commencement announcements and football flyers from Lawrence High Scholl, all from as far back as the 1880s.

A collection of programs from Lawrence High School commencement ceremonies from the 1880s.

LAWRENCE — The Lawrence High School graduates list begins in 1852 with L. Maria Cobb. It ends in 2018 with Joseph Xavier Zayas.

Soon, 723 graduates from 2019 will take their place in the online register, pushing the rolls well beyond the 45,000 mark.

Compiled over the course of 10 years by Lawrence Public Library archivist Louise Sandberg and her band of volunteers, the list was culled from shelves and boxes of school committee reports, yearbooks, graduation programs, school records and newspaper articles.

The names were cross-checked, scanned and entered into a spreadsheet for online navigation on the Lawrence Public Library Special Collections’ blog.

It took many hands at least hundreds of hours to complete the work.

Why go to these lengths?

Because, say those who assembled the register, a historical list such as this strengthens a sense of self and place.

The list, a simple thing, cultivates a feeling of belonging, of being part of a continuum in a positive way, of reaching an educational milestone that tells people who we’ve been, who we are and who we are becoming.

“How do I know who I am if I don’t know where I came from?” questions Kaslow, LHS Class of ‘65, the granddaughter of immigrants from Lithuania and Poland.

And in the future people will know of the graduates, she said.

Her class had 611 graduates, among them Jim Jajuga, Methuen’s mayor, and many students who would become police officers and serve in the Vietnam War.

One boy she sat with in homeroom during her school years was killed in Vietnam, she said

Kaslow, a library volunteer, will scan this year’s graduates’ names into the database when the high school guidance department makes them available in the coming weeks.

‘SOMEDAY I CAN SHOW MY KIDS’

Several Class of 2019 students, who were unaware of the project, weighed in on it after learning that they would soon have a place on the list.

Feeling a mixture of nervousness and excitement while assembling for graduation ceremonies at Lawrence Veterans Memorial Stadium a week ago Friday, they said they were glad to be part of the project.

“I think it is pretty cool,” said Iris Montanez. “Some day I can show my kids I was here. It is sweet, being part of this, from generation to generation.”

Asked if he thought the list mattered, Richard Hernandez of the Class of 2019 said it does.

“That list will always go down in history,” he said.

Among those in attendance cheering in the stands and on the field were past Lawrence High graduates including parents, brothers and sisters, uncles and aunts, and Lawrence High staff, teachers and administrators.

Lawrence Mayor Daniel Rivera, who graduated from the school in 1989, addressed the students, telling them that he and they shared a common experience, being the sons and daughters of immigrants. And just as he had, and later others will, they are now moving into the larger world.

He urged them to work hard, not be defined by others, define themselves through positive actions and hold Lawrence in their hearts.

The list’s names have for decades been mostly Spanish, reflecting the city’s 80% Hispanic or Latino population.

Waves of immigrants have arrived in Lawrence from places such as England, Ireland, Canada, Italy, Germany, Eastern Europe, Syria and Puerto Rico and the Dominican Republic.

The list’s numbers of names in particular eras reflect larger national and world events such as war and economic depressions, Sandberg says.

Over the years, Lawrence High School has been located in four different buildings.

The school was founded Jan. 31, 1849, with consultation from Horace Mann, an early American education reformer, teacher, administrator and U.S. representative from Massachusetts.

He advocated for public education.

The ultimate goal of a Lawrence High School degree was to lead students to college or gainful employment.

The first 17 students, who started high school in 1849, were housed on the first floor of the Oliver High School, located where the current Oliver School is today, Sandberg states in her library blog.

The next high school was built just to the east in 1868, the school from which Robert Frost and his future wife, Elinor White, would graduate from in 1892. She and he were co-valedictorians of their class.

The early years cited in the graduation list reveal small classes of 10 to 20 students. The classes grow and eventually expand significantly in the 1920s, as the sons and daughters of immigrants attended school, according to the blog.

To accommodate the larger classes, a new school was built on Lawrence Street across from today’s library. That school is still used for Lawrence education.

Today the high school is at 70-71 North Parish Road, off Route 114 in South Lawrence.

Among the volunteers who worked on the school list project are Bill Wolfendale of Andover and Joyce Boderader, a library volunteer and former school teacher.

Back in 2013 or 2014, Sean Boddy, a teen from Bellingham, volunteered on the project as part of his requirements for earning a citizenship badge in the Boy Scouts.

Boddy, now 21 and a Colby College student studying political science and Spanish, said his job was to type in names and organize them in a spreadsheet program.

He remembers thinking at the time that his work had value, knowing his father — a former Lawrence city attorney — would use such a resource in his genealogy research.

Sandberg uses the list to respond to inquiries from people researching family histories, from people who are curious to know if a certain person was a Lawrence graduate, and from people who organize class reunions.

Boddy also wanted to help the library digitize old records, which was starting to take place on a larger scale throughout the country at the time.

The Lawrence library staff itself has a good number of school alumni.

Both the library’s director and assistant director are local graduates: Jessica Vilas Novas, Class of ‘03, and Cassandra Abou-Farah, Class of ‘09.

The director said a total of five Lawrence graduates work at the library, and members of her high school class work for the police and fire departments.

This being a group with a limited number of people cultivates a sense of belonging, she said.

Maria Cobb was among seven students in the first graduating class in 1852, five of them girls.

The graduating list compilation projects at the library are growing, too.

The archivist was given an entire set of Lawrence’s Sacred Heart School yearbooks and has recently posted a list of graduates from 1932 to 1978.