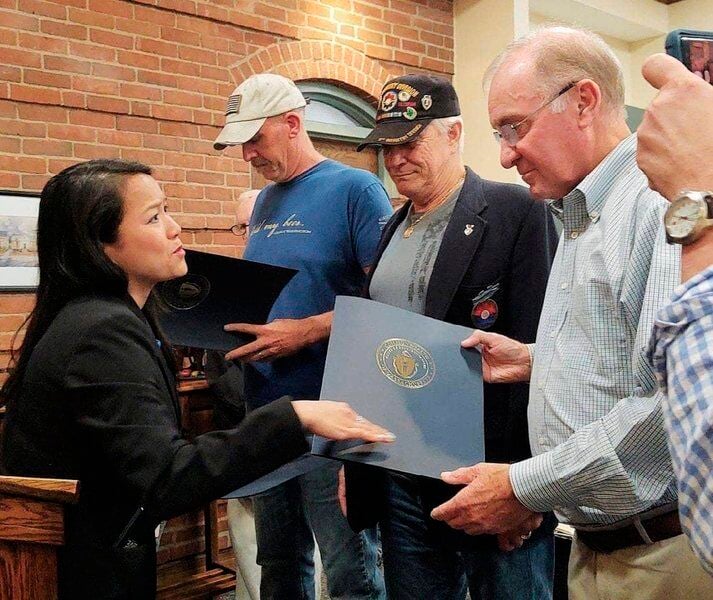 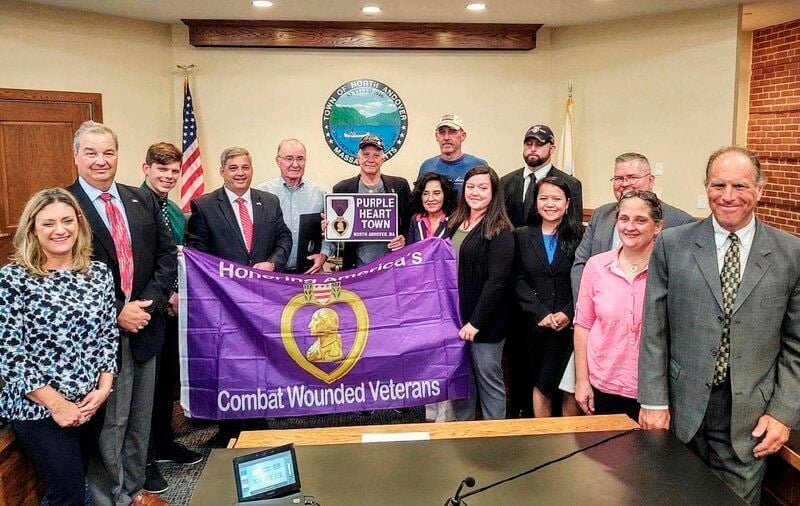 NORTH ANDOVER — As a medic with the Army's civil affairs branch, David Swarbrick's job was to help people in the countries where Americans were fighting.

"We had medical capabilities, veterinary capabilities, winning the hearts of local populations to help us in the fight against terrorists," he said.

But one day on patrol in a village in southern Afghanistan, Swarbrick had to use his skills to help his fellow soldiers, and himself.

"The soldier in front of me set off a pressure plated IED," he said. "I ended up treating seven people that day, at that moment. The gentleman in front of me was a double amputee at the pelvis."

Swarbrick, who served in the Army from 1990 to 2020, was awarded a Purple Heart Medal for the wounds he received.

That fact was honored at Monday's meeting of North Andover's Select Board, which named their town a Purple Heart Community, while also declaring that Aug. 7 will be observed each year as Purple Heart Day in town.

As explained in the proclamation read by Select Board Chair Laura Bates, the Purple Heart was originally created Aug. 7, 1782, by General George Washington, as the Badge of Military Merit.

General Douglas McArthur revived it as the Purple Heart Medal on Feb. 22, 1932, to recognize those who have been wounded or killed in combat.

Local Purple Heart recipients Robert Turner, who served with the Army in Vietnam from 1967 to 1968, and Jack Garvin were also recognized at the meeting.

Along with Swarbrick, they were given citations from the Select Board, state Reps. Tram Ngyuen and Christina Minicucci, and state Sens. Diana DiZoglio and Bruce Tarr.

District Director of Veterans Services Joseph LeBlanc said he has identified five living residents of North Andover who were awarded Purple Hearts, and they also include Steven Grasso and Patrick Danahy.

LeBlanc, an Army veteran of 15 years, knew Swarbrick and Turner personally, but found the other three through word of mouth and social media.

"I had to do outreach," he said. "Really, there's no way for me to look in the database for a veteran who enlisted in North Andover. It's just going to be a name."

LeBlanc has been district director for veterans services in North Andover and Boxford since November 2017, and said it's a "great thing" to honor veterans, particularly those who were killed or wounded in action.

"We have lists of wounded, killed in action and men who served going back to the French and Indian War," he said. "I could have done a roll call (Monday), but it would have become more of a ceremony at that point, and we tried to keep it a presentation."

LeBlanc was moved to seek the Purple Heart Community designation for North Andover after finding out that Boxford had received its own in 2016.

He learned about the process from the state's chapter of the Military Order of the Purple Heart, which was represented at Monday's event by Kurt Power, also a recipient of the medal.

As part of the town's recognition of Purple Heart Day, plaques will be posted in nine locations around town, and a Purple Heart flag will be flown on the town's old center from the Friday before Saturday, Aug. 7 until the Monday after.

A ceremony will be held at that flag on Purple Heart Day by Dave Hruban, chair of the North Andover Patriotic Observance Committee.  The time for the event has yet to be determined, but will be posted on the Facebook page for Veterans Services for Boxford and North Andover.

Swarbrick said he had never heard of a Purple Heart Community before discussing it with LeBlanc, but thinks it's an important way to gain recognition for members of the military.

"In WWII, half the population was related to somebody who fought, and as time goes on, the number of people who know somebody in the military has diminished," he said. "They know we're there, but they don't know us per se, so it's important that the public knows these people are out there."

Swarbrick, who has also been a member of the Lawrence Fire Department for 21 years, spent 10 years in the army on active duty and 20 in the reserves.

He served in the First Gulf War, Somalia, Bosnia, Haiti and Africa, as well as on six tours of duty in Afghanistan. He said he thinks service members from this era are much less visible than veterans of earlier wars.

"You get down to the war on terror and the amount of people who served in a combat role is minute, it's less than 10 percent," he said. "People aren't aware they have neighbors who served, because there aren't that many."

For his part, he knows that he will never be able to forget the wounds he suffered along with his fellow soldiers that day in Afghanistan.

"I would say that I think anybody that's been in war carries it with them forever," Swarbrick said. "That's the best way I can describe it."