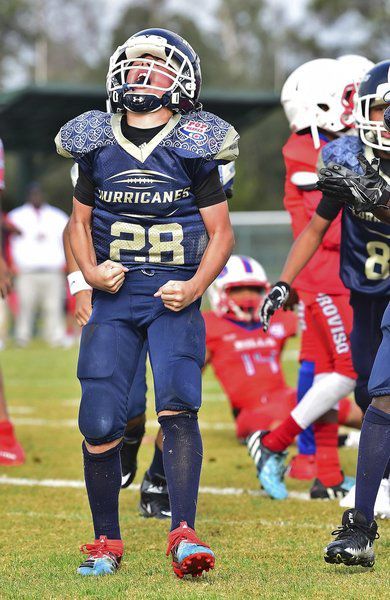 (Courtesy) Dionair Leonardo, of the Lawrence Hurricanes, celebrates after a play in a Pop Warner 10U semifinal in Orlando, Florida, on Wednesday, Dec. 11. 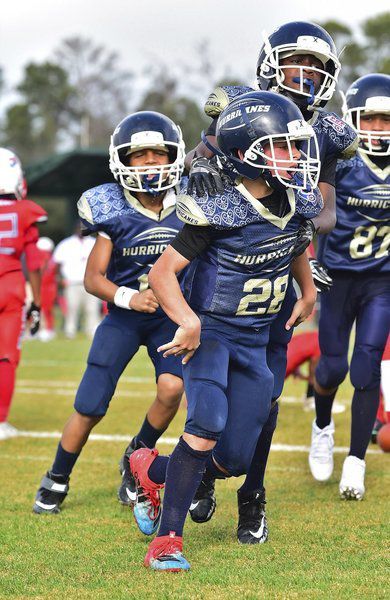 (Courtesy) The Lawrence Hurricanes celebrate with Dionair Leonardo (28), after a play in a Pop Warner 10U semifinal in Orlando, Florida, on Wednesday, Dec. 11.

(Courtesy) Dionair Leonardo, of the Lawrence Hurricanes, celebrates after a play in a Pop Warner 10U semifinal in Orlando, Florida, on Wednesday, Dec. 11.

(Courtesy) The Lawrence Hurricanes celebrate with Dionair Leonardo (28), after a play in a Pop Warner 10U semifinal in Orlando, Florida, on Wednesday, Dec. 11.

ORLANDO, Fla. — There was a time last Saturday as Ryan Mustapha watched his team practice that he wondered if the Lawrence Hurricanes could compete with the best in the country.

He'd also seen the sizes of boys from other teams back at the hotel.

But after a second impressive and dominating performance in which the Lawrence 10U Pop Warner team bested Proviso Township (Maywood, Illinois), 32-6, in the semifinals, Mustapha wonders about different things.

For example, is this team of 10-year-olds best in the nation?

"These kids are relentless," the coach said. "We honestly hoped we could compete. Now it's different. Our boys believe they can beat anybody."

The Hurricanes, which bested Northbridge, New Jersey, 22-0, last Saturday, have allowed only six points in its last five games, all with one-and-done implications —  lose and the season's over.

The defense started its big day against Proviso Township on Wednesday with three consecutive sacks, the last of which occurred in the end zone when Junior Gomez and Will Lavallee tackled the quarterback for a safety.

Then the Lawrence offense, led by twins Damari and Dionair Leonardo, took over in a big way.

First, Damari bolted 60 yards for a touchdown and an 8-0 lead. After a Proviso touchdown, Lawrence led 8-6 at the half.

Then Damari opened the second half with another big run, this time for 40 yards and a 14-6 lead.

Later in the third quarter, Damari took a big hit following a 28-yard gain, and his brother Dionair took over running back duties.

Dionair finished off third-quarter and early fourth-quarter drives with touchdown runs of 15 and 14 yards, extending the lead to 26-6.

Amette Mustapha finished the scoring with a quarterback sneak in the final seconds to make it 32-6.

"Again, our defense was incredible," said coach Mustapha. "We had not given up any points the last four games before they got their touchdown (in the second quarter).

"It isn't one player. It's everybody," he said. "We swarm like no other team I've ever coached."

Nate Pichardo remained the hottest safety in Orlando, with two more interceptions on Wednesday. One of them was a highlight reel catch while falling in the opponent's end zone.

Pichardo also had two picks in Lawrence's 22-0 win on Saturday.

The Lawrence kids went to a big Pop Warner party for all players and their families on Wednesday night. Then they'll go to Disney World on Thursday.

It will be back to football on Friday and, of course, the title game against the Palmetto (Florida) Raiders on Saturday at 9:30 a.m.

L — Safety, tackled by Will Lavalle and Junior Gomez in end zone